Inaccurate surveys of ocean depths a threat to mega-ships

Two-thirds of the Earth are covered by water.
As of today, most of the oceans have not been explored.
GEBCO (General Bathymetric Chart of The Oceans) is a non-profit organization, which relies largely on the voluntary contributions of an enthusiastic international team of geoscientists and hydrographers.
The purpose of GEBCO is to provide the most authoritative publicly-available bathymetry of the world's oceans.
GEBCO produces charts and digital grids of the world oceans with data contributed from many reliable sources.

From JOC by Chris Brooks

When the 3,351-TEU container ship Rena grounded off New Zealand in 2011, the cargo losses totaled $1 billion, and the salvage operation took seven months.

The loss pales in comparison to what’s at stake as the latest generation of container ships approach 20,000 20-foot-equivalent units.
“The Rena, next to an ultra-large container ship, would be like an average-sized 2-year-old next to Shaquille O’Neal,” Chris Smith, senior vice president of ocean marine at Endurance Insurance, said at an American Institute of Marine Underwriters seminar last May.
“Pick a figure: $2 billion, $3 billion, $4 billion. A grounding by an ultra-large container ship with a large capacity cannot be ruled out, and the loss could be $4 billion.”
And, while it took seven months to clean up the Rena, it “could take two years to remove all the containers from a 19,000-TEU ship in the event of an incident, assuming that it was possible at all,” Allianz Global Corporate & Specialty Insurance wrote in its Safety and Shipping Review 2015, released in January. 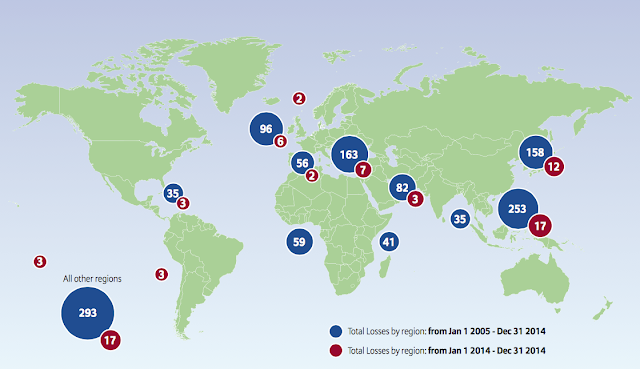 Total Losses by Top 10 Regions: 2005-2014 and 2014
Source: Lloyd’s List Intelligence Casualty Statistics. Analysis: AGCS
The risk of such a catastrophic loss only increases as more mega-vessels begin calling at ports around the world that have never seen ships of that length, width and depth.
More alarming, according to a new report from the Global Marine Practice at insurance brokerage Marsh, is that accurate surveys of ocean depths — or bathymetrics, the underwater equivalent of topography — are inadequate or nonexistent in large expanses of the world, with many areas either having no survey or having surveys that haven’t been verified since being done more than a century ago.

In the U.S., at least, bathymetric surveys have been performed to modern standards on 75 percent of navigationally significant waters, according to Royal Navy Rear Adm. Tim Lowe, the U.K.’s national hydrographer.
That’s superior to many other developed and undeveloped countries, including the U.K. itself, which has adequate surveys on less than half of its coastal waters.
Other shipping giants fare even worse, including Japan, 46 percent; Australia, 35 percent; Panama and the Philippines, 25 percent each, according to the International Hydrographic Organization, the intergovernmental institution that coordinates the world’s coverage of official nautical charts.

Navigation routes to the Panama Canal, for example, have been the same for years, with cargo vessels following “tried-and-tested pathways,” the Marsh report found.
But what’s safe for a vessel requiring 40 feet of draft may not be safe for one requiring nearly 55 feet, as today’s largest container ships do, and that’s where the risk multiplies.

“We have better maps of the surface of Mars and the moon than we do the bottom of the ocean,” the Marsh report quoted Gene Feldman, a U.S. oceanographer for NASA, as saying.
“We know very little about most of the ocean.”

If progress is to be made, it may have to come from the International Maritime Organization and its Safety of Life at Sea convention.
As with the SOLAS weight verification mandate currently roiling container shipping markets, the IMO, in this case since January, has the power to audit the performance of countries in their obligation to provide safe passageways for vessels.
In a strange twist, however, the IMO has no power to force countries to fulfill that obligation, nor do vessel operators have to share the bathymetric data their vessels collect, according to the Marsh report.

Lacking that accurate data, it may not be a matter of if a catastrophic event will occur with an ultra-large container ship, but when.
And when it does, the industry best prepare for new regulations that lead to disruption the likes of which make all others look like a day at the beach.