Time after time the search has been made, and time after time, they've all come back empty handed. However this week, Kongsberg Maritime Ltd, the UK division of Kongsberg Maritime, has achieved the unimaginable and uncovered the elusive Nessie.
That is, the long lost model of Nessie which was used during filming of 1970's "The Private Life of Sherlock Holmes".

From BBC by Steven McKenzie


A 30ft (9m) model of the Loch Ness Monster built in 1969 for a Sherlock Holmes movie has been found almost 50 years after it sank in the loch.
The beast was created for the Billy Wilder-directed The Private Life of Sherlock Holmes, starring Sir Robert Stephens and Sir Christopher Lee.
It has been seen for the first time in images captured by an underwater robot.
Loch Ness expert Adrian Shine said the shape, measurements and location pointed to the object being the prop.

Another of Kongsberg Maritime's images of the lost Nessie model

The robot, operated by Norwegian company Kongsberg Maritime, is being used to investigate what lies in the depths of Loch Ness. 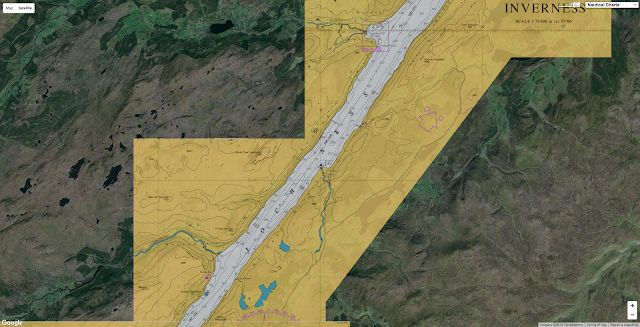 VisitScotland and Mr Shine's The Loch Ness Project, which gathers scientific information on the loch's ecology and the potential for a monster, is supporting the survey.
Mr Shine told the BBC News Scotland website: "We have found a monster, but not the one many people might have expected.
"The model was built with a neck and two humps and taken alongside a pier for filming of portions of the film in 1969.
"The director did not want the humps and asked that they be removed, despite warnings I suspect from the rest of the production that this would affect its buoyancy.
"And the inevitable happened. The model sank."

Mr Shine added: "We can confidently say that this is the model because of where it was found, the shape - there is the neck and no humps - and from the measurements."
The model was floated out to a place in the loch where only a few months earlier claims of sighting of Nessie had been made.

The long lost model of Nessie used during filming of the 1970's "The Private Life of Sherlock Holmes".

The Private Life of Sherlock Holmes was made in the US and UK in 1969 and released in cinemas in 1970.
It was directed by Billy Wilder, a famous figure of Hollywood's "golden age" whose long catalogue of features included Some Like It Hot starring Marilyn Monroe.
The Sherlock film tells of the detective investigating the disappearance of an engineer. The case takes him to Loch Ness and an encounter with a monster.
Sir Robert Stephens played Holmes, Colin Blakely was Dr Watson and Sir Christopher Lee was the sleuth's brother, Mycroft Holmes.
Talented special effects artist Wally Veevers, whose other work included 2001: A Space Odyssey, Superman and Local Hero, led the building of the 30ft-long Loch Ness Monster.
It sank on its first outing on the loch while being towed behind a boat.
Wilder is said to have comforted Veevers after watching his creation disappear beneath the waves.
The director, who had also been dogged with problems lighting scenes at Loch Ness, had a new monster made - but just its head and neck - and moved the filming to a large water tank in the film studio.
Kongsberg's torpedo-shaped Munin drone is equipped with sonar imaging and has already made several sweeps of the loch's bottom.
Among other material the drone has already detected have been the wreck of an unidentified sunken boat.
However, measurements made using the device dispute a claim made in January of a new deepest point in the loch.
A tour boat skipper Keith Stewart recorded a depth of 889ft (270.9m) on sonar equipment he uses.
The official maximum depth, which still remains in place, is 754ft (229.8m).

The survey work continues with the drone

An image of the sunken boat found during the survey

Kongsberg's survey work forms part of Mr Shine's ongoing called Operation Groundtruth,
Malcolm Roughead, chief executive of VisitScotland, added: "No two areas around or on the water feel the same - whether it is a sense of awe at the beauty of the scenery or a feeling of anticipation at what might surface from below the waters.
"We are excited to see the findings from this in-depth survey by Kongsberg, but no matter how state-of-the-art the equipment is, and no matter what it may reveal, there will always be a sense of mystery and the unknown around what really lies beneath Loch Ness."

The latest survey challenges a recording of a new deepest point in the loch
People have been searching for the Loch Ness monster for centuries.
Now you can explore for yourself in Google Maps.