Saunders Island and Wolstenholme Fjord with Kap Atholl in the background are seen in an image taken during an Operation IceBridge survey flight of Greenland in April 2013.
(Michael Studinger/NASA/Reuters)

Around the world, from Alaska's remote North Slope to the island nations in the South Pacific, coastal communities are watching their shorelines slip away into the rising seas.
But in an unexpected discovery, scientists have found one place where the effects of climate change are having the opposite impact.


Meet Helheim, a glacier in Greenland of exquisite beauty at every scale.

It seems that river deltas on the coast of Greenland are actually growing bigger at a time when many deltas elsewhere around the world—and even elsewhere throughout the Arctic—are eroding away.
The finding is all the more surprising considering that Greenland is home to the world's second-largest ice sheet, whose melting glaciers are among the planet's biggest potential contributors to future sea-level rise. 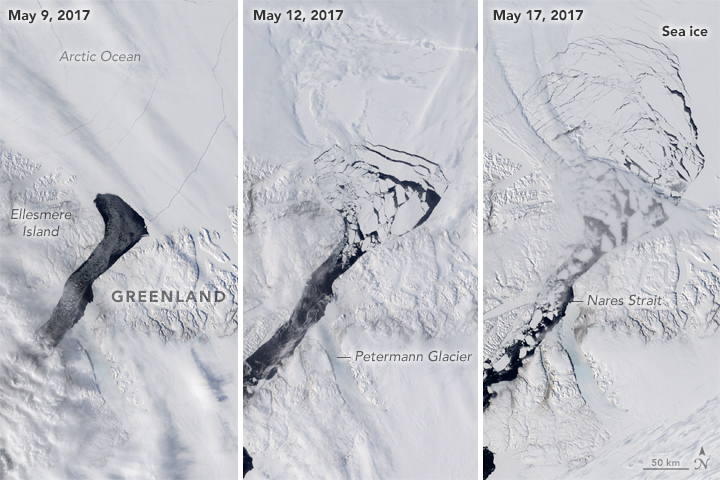 Breakdown of an Ice Arch
NASA

Here's the surprise: It's the melting glaciers that are causing these delta regions to expand, scientists say.

In their findings published Tuesday in the journal Nature, the researchers note that as glaciers melt, they send fresh water and loose sediment flowing out toward the ocean.
The sediment is then deposited along the coastline where the rivers meet the sea, causing the delta to expand outward.

"We were surprised to see that in Greenland we had the exact opposite trend of what is going on in the rest of the Arctic," said Mette Bendixen of the University of Copenhagen, the study's lead author.

The researchers had expected the ocean to play a bigger role in eroding away the coastline, as it has elsewhere—especially as climate change is causing more Arctic sea ice to melt away, leaving the surface of the water exposed.
Instead, they found that Greenland's deltas are largely shielded from the ocean's waves by the presence of large, steep-cliffed fjords.

The researchers made their discovery by examining aerial imagery from the 1940s and 1980s—including photographs taken on flights by the U.S.
Army during World War II—and Google Earth satellite imagery from the 2000s to see how Greenland's deltas had changed over time.
They found that the deltas remained mostly static between the 1940s and the 1980s, but expanded from the 1980s on. Topographic figure from the new study.
On the left (a), the figure is color coded between -1500 m and +1500 m with respect to mean sea level, with areas below sea level in blue.
On the right (b) the figure shows regions below sea level (light pink), that are connected to the ocean and maintain a depth below 200 m (dark pink), and that are continuously deeper than 300 m below sea level (dark red).
The thin white line shows the current ice sheet extent.
(Mathieu Morlighem)

These findings suggest that Greenland's glaciers have been experiencing increasing ice loss for at least three decades—a result that may reinforce scientists' concerns over the stability of the melting ice sheet.
The research also suggests that areas with more intense meltwater runoff are seeing the most expansion along the coastline.

It may seem like the Greenland coast is catching a rare break, while other coastal regions throughout the Arctic are slipping away.
According to Bendixen, it's been well-documented that shorelines in Alaska, Canada and Russia are "generally eroding," and there's great concern about what will happen to the human communities in these places.
Multiple Alaskan villages have already begun preparing for the need to relocate. Several open-fan deltas are located along the coast within the narrow fjord in Greenland.
(Anders Anker Bork)

But Bendixen cautioned that Greenland's expanding deltas are not necessarily a good thing for nearby human communities either.
They rely heavily on fishing and tourism, she noted—but as the deltas push outward, the harbors that these industries depend on become sandy and difficult to navigate.
And if ice loss continues to accelerate in the warming Arctic, this effect may only become more pronounced in the future. Two open-fan deltas located in a narrow fjord in Greenland.
In the distal part of the image, a restricted delta and its plume of sediment is visible.
(Anders Anker Bjork)

But these changes send another message, as well, one that reverberates far beyond the Greenland shore.
The shifting coastline is a sobering reminder that Greenland's ice sheet is changing, as well, in ways that could have dramatic consequences throughout the rest of the world.