Earlier this month, Chris Turney set off from New Zealand with a team of 36 people aboard the Russian research ship Akademik Shokalskiy, bound for Antarctica. 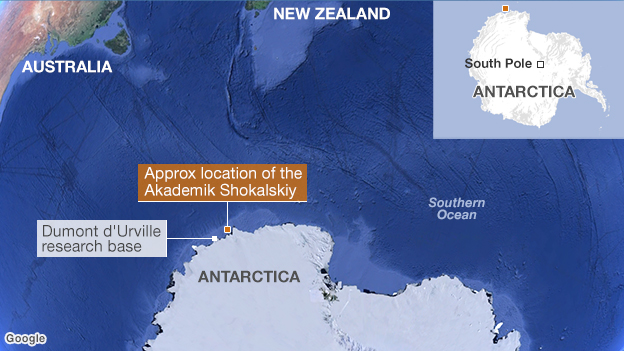 The goal of this modern Australasian Antarctic Expedition (AAE) is to duplicate some of the observations and experiences of Sir Douglas Mawson's original AAE team, which sailed for the southern continent 102 years earlier.
But on December 24, the Shokalskiy found itself icebound far off the Antarctic coast.
Alerted by radio, a Chinese icebreaker, along with other powerful ships, steamed through the pack to rescue the full team of 74 scientists, students, and crew marooned aboard Turney's vessel.
There was no fear of any loss of life, but as of December 30, the Russian ship was still stuck fast in the pack, and it was not clear how soon it could be freed. 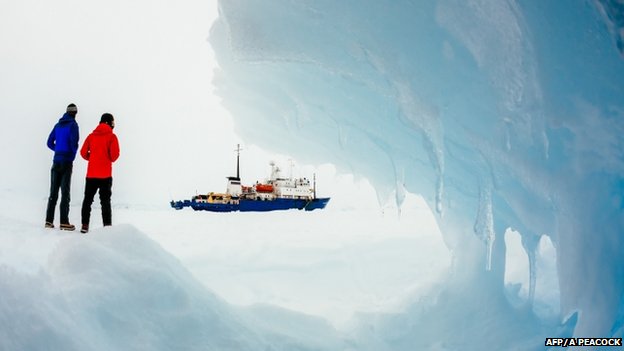 For me, all this brings home just what extraordinary deeds Mawson's AAE team accomplished between 1911 and 1914.
I confess to my own bias in favor of those Edwardian adventurers, as I recently wrote a book called Alone on the Ice about Mawson's landmark expedition, as well as an article about Mawson for the January 2013 issue of National Geographic, titled "Into the Unknown."
Still, let's ponder just what phenomenal challenges Mawson and his men overcame a century ago—challenges that no one today seems capable of duplicating.

No Hope of Rescue

Had Mawson's ship the Aurora gotten stuck in the ice in December 1911 or January 1912, it is entirely possible that all 28 members of Mawson's team, as well as the dozen or so ship's crew under Captain John King Davis, would have eventually died, either of starvation or hypothermia.
(See historic pictures of the Mawson expedition.)
In those days, there was no hope of rescue from another ship. Davis and Mawson had no radio contact with the outside world, and no one in Australia knew where the ship was. There were no icebreakers back then.
If a ship got stuck in the ice in the Arctic or Antarctic, the only hope was to winter over onboard and hope the next summer's thaw freed the vessel.
A few years after the AAE, the pressure of heavy ice sank Sir Ernest Shackleton's Endurance.
His only option left was an incredible over-ice trek to Elephant Island and an open-boat journey to South Georgia Island (by dead reckoning in a tiny lifeboat saved from the Endurance), now considered one of the great survival deeds of all time. Turney's team hoped only to reach Commonwealth Bay, where Mawson's base camp hut was built, and to repeat many of the observations the original AAE crew made in and around that base. (See "Modern Explorers Follow the Century-Old Antarctic Footsteps of Douglas Mawson.")
For Mawson, simply finding a cove in which to build a hut presented a monumental challenge, since the 2,000-mile (3,700-kilometer) swath of Antarctica that he hoped to explore was a blank on the map.
Once they found Commonwealth Bay and built the hut, Mawson and his crew planned to winter over, knowing that the scientific research and exploration that were the purpose of the expedition could take place only during the second summer.
Turney's journey was planned for four weeks; Mawson counted on a minimum of 15 months.
In the end, for seven team members, the AAE lasted almost twice that long.

In the summer of 1912-13, Mawson sent out eight different three-man teams hauling sledges, each in a different direction.
The amount of science and discovery those teams accomplished, as they ranged as far as 300 miles (555 kilometers) from the hut, was unparalleled before or since.
Given the short span of Turney's voyage, there was no intention of venturing more than a few miles from the hut—if they could even reach it.

It's all the more astonishing, and a measure of Mawson's huge ambition, that in addition to his own 18-man contingent at Commonwealth Bay, Mawson set up another base.
He appointed the tough, unflappable veteran Frank Wild to sail with seven men in the Aurora a full 1,500 miles (2,700 kilometers) farther west along the Antarctic shore to establish an autonomous second base and carry out its own program of science and exploration.
Wild's situation was even more perilous than Mawson's, for in the end he had to build his hut on a moving ice floe, not on bedrock.
At any time during the winter, the ice shelf could have calved into the sea, taking all eight men and the hut with it.
And by February 1913, Wild and his men had no idea if the overdue ship was going to pick them up. Should it fail, the men would've had to kill enough penguins and seals to survive a second winter, still with no real hope of rescue, for no one in the world except John King Davis knew where they were.

Starvation and Falling Into an Abyss

The feat that led Sir Edmund Hillary to salute Mawson for pulling off "the greatest survival story in the history of exploration" reached its climax (or nadir) in January 1913.
Having lost his partners Belgrave Ninnis in a crevasse fall and Xavier Mertz to starvation, Mawson—severely debilitated and almost out of food—man-hauled his half-sledge 100 miles (185 kilometers) back to the base camp hut in Commonwealth Bay.
On January 17, he broke through a snow bridge and fell 14 feet (4.2 meters) into the dark abyss of a crevasse, checked only when his hemp harness rope caught his fall, the sledge having providentially stuck like an anchor in the snow.
On the verge of giving up, Mawson pulled himself hand-over-hand up the rope and reached the surface, only to have the lip of the crevasse break, plunging him all the way back in.
Summoning his last reserves of strength, he pulled himself up a second time, crawled onto firm snow, and passed out.
A few years ago, the brilliant Australian Antarctic explorer Tim Jarvis tried to recreate Mawson's solo journey—although with all kinds of built-in backup and safety nets, including a film crew with a rescue helicopter and constant radio contact.
At the end of his own journey, Jarvis was able to pull himself the 14 feet out of a crevasse (into which he had been carefully lowered by the film crew).
Asked to do it a second time, as Mawson had to, Jarvis failed.
(See also: "Ship Stuck in Antarctica Raises Questions About Worth of Reenacting Expeditions.")

On February 8, 1913, Mawson got back to the hut in Commonwealth Bay to learn that he had missed catching the relief ship Aurora by only five hours.
Thus he and the six men delegated to search for his body resigned themselves to a second winter in Antarctica, in what has since been proved to be the windiest place in Earth at sea level.
They pulled it off, despite one of the men going insane, as a result of which his companions had to post a guard day and night, for the man veered between begging the others not to kill him and threatening to murder them all.
They don't make 'em like they used to!