Madagascar in July imposed a prohibition on industrial trawlers fishing in waters within 2 nautical miles (3.7 kilometers) of the country’s coast.
From Mongabay by Rivonala Razafison
ANTANANARIVO — During the current shrimping season, 39 trawlers will catch just over 4,000 metric tons of shrimp in Madagascar’s waters.
But one company, with a five-year exploitation right, didn’t apply for licenses to trawl this year.
Its idle vessels highlight both improving regulation and potential weaknesses in monitoring of the country’s fishing sector. 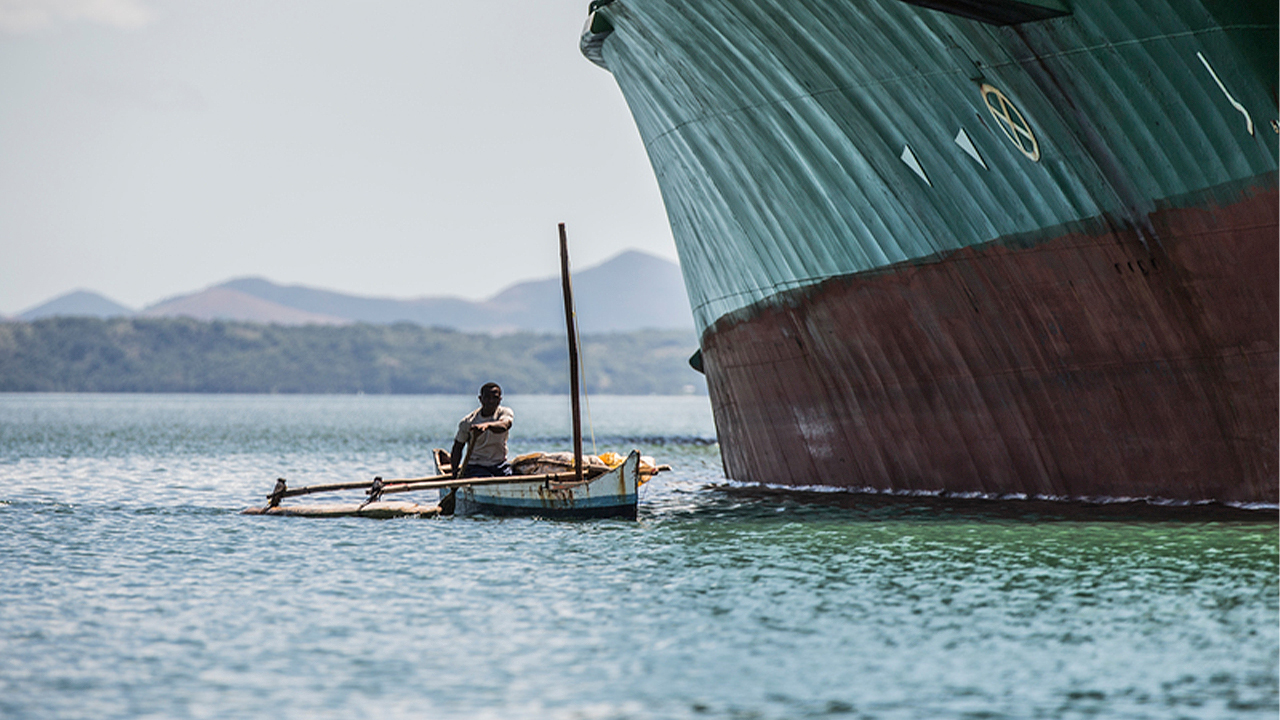 An artisanal fisherman next to a ship in Madagascar.
Image © Pierre Baelen / Greenpeace.
Chinese-owned Mada Fishery was only registered in 2021.
The company bought exploitation rights for eight vessels.
The company says it also bought eight shrimp trawlers, which spent part of last year being repaired at the state-owned shipyard at Antsiranana, on the northern tip of the island.

But Mada Fishery’s boats have a troubled history, according to an investigation by the Environmental Justice Foundation, an NGO that promotes environmental sustainability around the world.
EJF says three of these trawlers previously violated fishing regulations off the West African coast and should be banned from operating in Malagasy waters.

“As recently as 4 November 2020, the vessels were intercepted by the Gambian Navy, Gambian Department of Fisheries and Sea Shepherd,” Steve Trent, founder and CEO of London-based EJF, told Mongabay.

“The trawlers were found to have been fishing inside protected waters reserved exclusively for small-scale fishers in Gambia,” he added.
“The Gorde 105 and Gorde 107 vessels were also double-bagging their nets — another offense under Gambian fisheries regulations. As a result of the Gambian Navy and Department of Fisheries findings, fishing trawlers Gorde 105, Gorde 106 and Gorde 107 were impounded and escorted to the Gambian port of Banjul.”

Malagasy regulations state that “no vessel with a history of illegal fishing should be allowed to fish in the country’s waters” — unless there’s proof of a change in ownership. 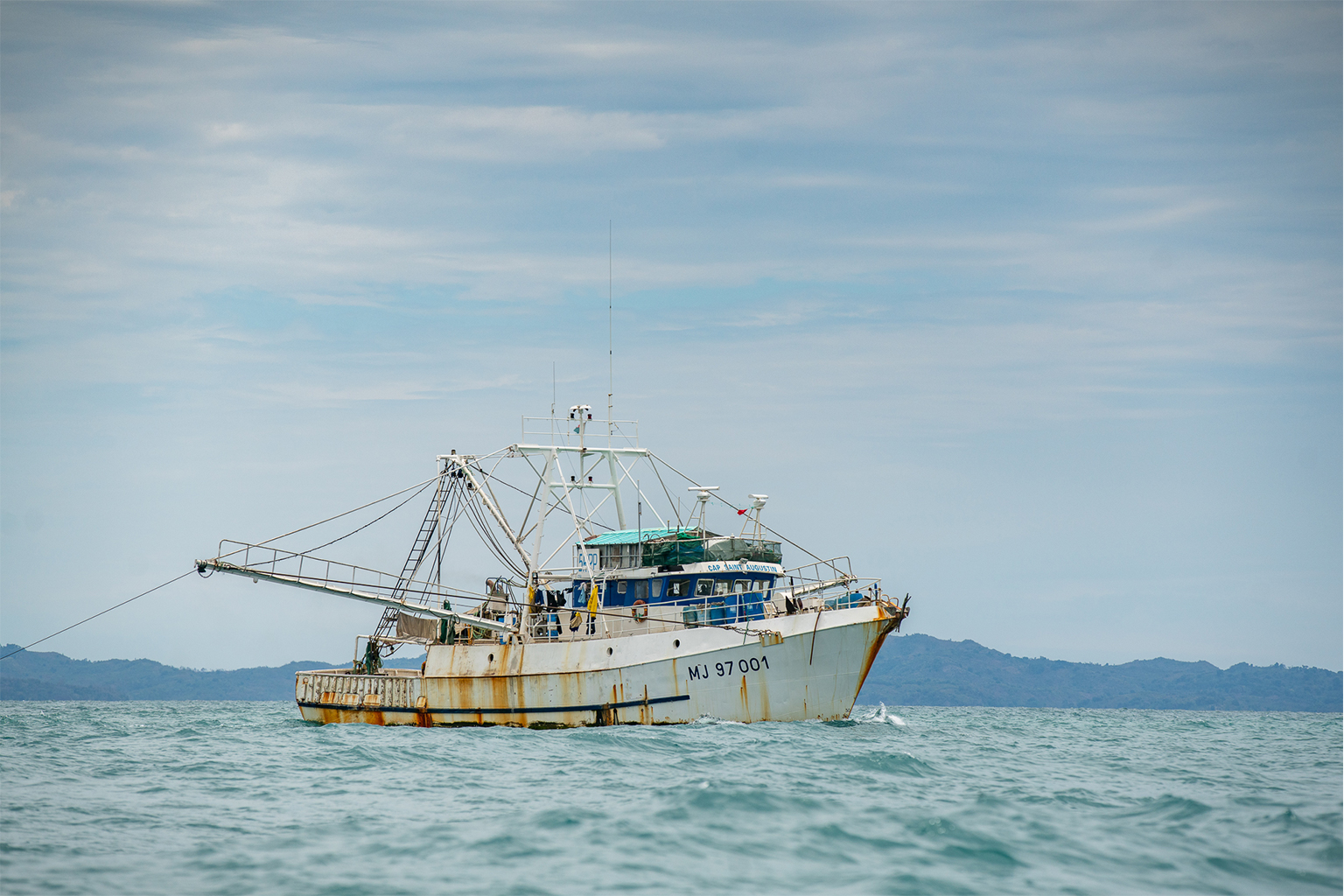 A fishing trawler — the Cap-Saint Augustin, not one of Mada Fishery’s — off the shore of Nosy Faly.
Image by Mongabay.
Messy paperwork

EJF says it’s not clear that the vessels have actually changed hands.
When Mada Fishery’s fleet of trawlers anchored in Seychelles en route to Madagascar, documents submitted by the captains of at least four of the boats appeared to have been forged.

EJF says the identification numbers for Gordes 105-108 correspond to ships in an entirely different fleet, officially registered to a company called Shandong Roncheng Dafa Fisheries Co.
Ltd.
But EJF found no such company listed in Chinese vessel registration records: every Chinese corporation has a unique number called a Unified Social Credit Identifier, but the number provided on the Gorde fleet’s documents for Shandong Roncheng Dafa does not match that of any existing company.

The ships’ documents and hulls all had the same call signs, making it difficult to identify them individually.
Worse yet, the 16-digit number used by the Chinese government to identify fishing vessels also appeared to be wrong.

In light of these irregularities, the campaigners say the ships should not be licensed to fish until clear proof of ownership is provided.
Perhaps tellingly, Mada Fishery did not attempt to register the disputed boats to fish for shrimp this year.

But what about the future?
If they are now owned by Mada Fishery, the eight trawlers should qualify for fishing licenses.

“That could be the case if they respect the existing laws and regulations,” Mahatante Tsimanaoraty Paubert, Madagascar’s minister of fisheries and the blue economy, told Mongabay.
“The vessels changed names and owners. According to the Malagasy laws and regulations, we can issue license as long as they comply with our laws. They can apply for fishing licenses as they hold fishing rights they bought.” 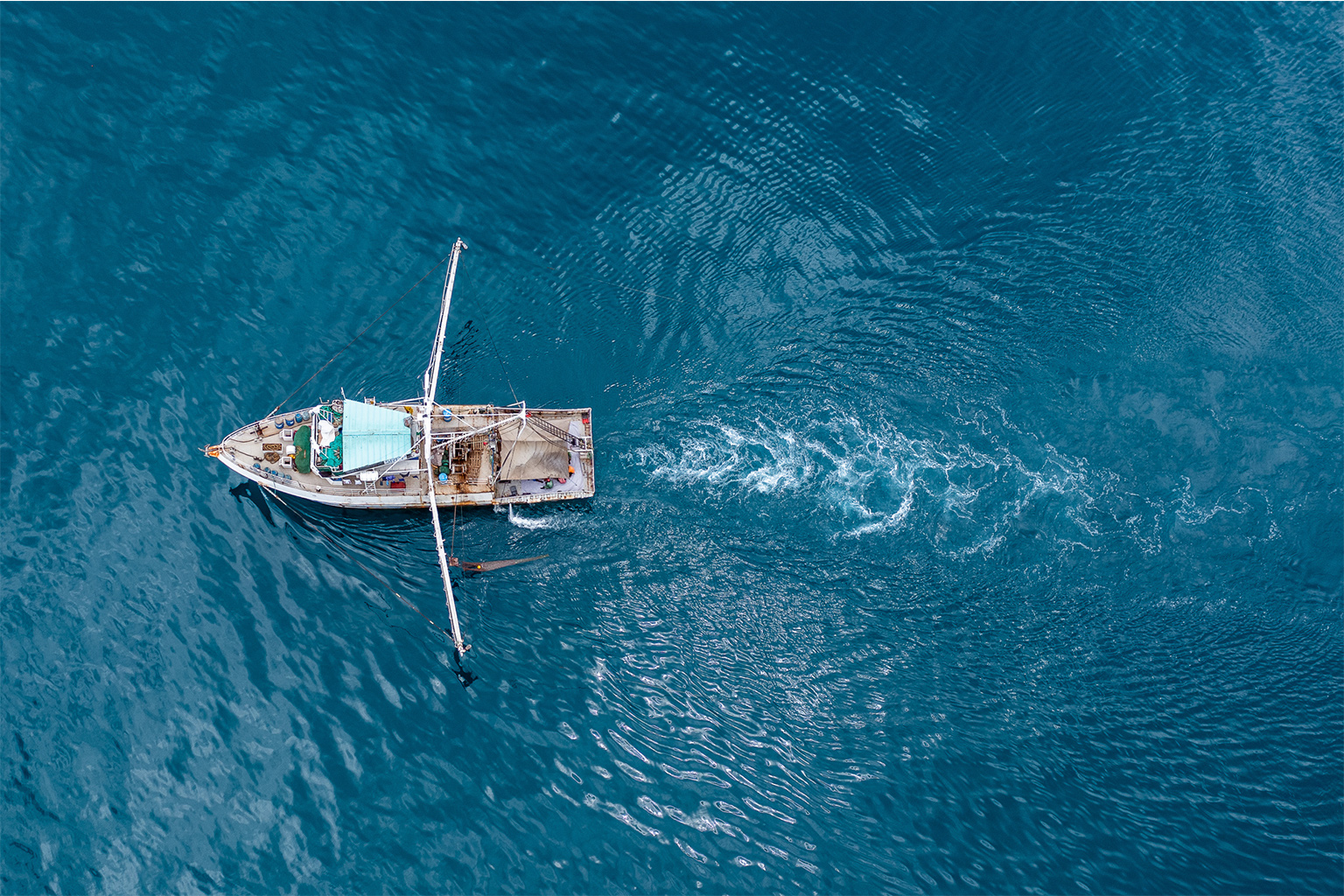 A fishing trawler fishing off the shore of Nosy Faly in northwest Madagascar.
Image by Mongabay.
Improving fisheries monitoring

While Mada Fishery’s boats are idle, the trawlers fishing off Madagascar this year will be more closely monitored than in the past.
Paubert said the government’s own surveillance will be supplemented by several international collaborations.
“Apart from the Fisheries Surveillance Center (CSP) within the ministry, the European-funded Ecofish Program, by the mean of its OSIRIS II ship intervening in the Western Indian Ocean, helps us stop any eventual illegal fishing activities in our waters.”

Other support will come from Amsterdam-based NGO Sea Shepherd Conservation Society.
“They are to fully put a ship with its crew at our disposal to patrol our waters under the control of the government,” Paubert told Mongabay.
“Madagascar hasn’t to pay for their service.
What we have to do is to make available onboard the nearby 25 Malagasy fishing inspectors and the navy’s forces for the ship’s security.”

Paubert was only appointed to his role as minister overseeing fisheries in October last year.
Just weeks later, Madagascar joined the Fisheries Transparency Initiative (FiTI).
Its mission is to improve the sustainability of global fisheries by increasing the transparency of government management of stocks.
Links :
Posted by geogarage at 1:46 AM