How nuclear subs could transform Australia, its alliance and Asia

HMS Talent, one of the Royal Navy’s nuclear-powered submarines: the UK and US have agreed to support Australia acquiring nuclear-powered submarines (Ministry of Defence)
From LowyInstitute by Sam Roggeveen
First thoughts on the consequences of a truly momentous decision.
Australia is about to join an exclusive group of nations operating one of the most lethal military platforms ever conceived – nuclear-powered submarines.
My initial thoughts on this extraordinary announcement are below.
These are subject to revision as I think through the implications of what is a truly historic announcement:
Only six nations currently operate nuclear-power submarines (SSNs), and all six have civilian nuclear power industries and nuclear weapons programs.
Australia joining this club marks a dramatic break with this historic norm (although for some years Brazil has had a research program aimed at eventually fielding an indigenous SSN).
It is impossible to read this as anything other than a response to China’s rise, and a significant escalation of American commitment to that challenge.

The United States has only ever shared this technology with the United Kingdom, so the fact that Australia is now joining this club indicates that the United States is prepared to take significant new steps and break with old norms to meet the China challenge.
I have been sceptical of the idea that the United States really wanted to enter a Cold War with China, but this announcement is significant evidence that it is indeed prepared to take such a momentous step.
It is wise to assume that the scale of this agreement, and the close strategic and operational links it implies, will create expectations from Washington.
Australia cannot have this capability while assuming that it does not come with heightened expectations that Australia will take America’s side in any dispute with China. 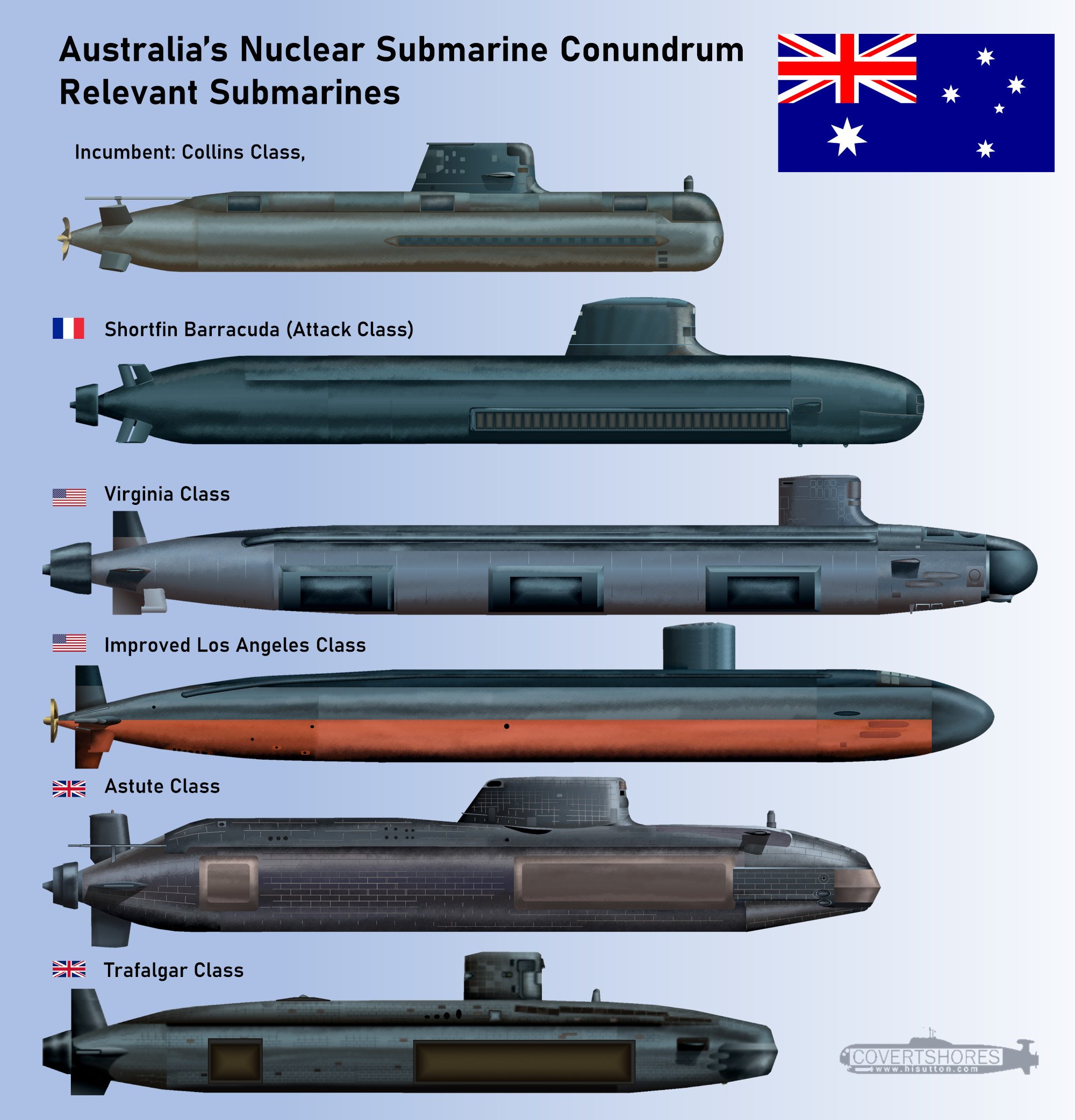 The U.S. is forming an Indo-Pacific security alliance with Britain and Australia that will allow for greater sharing of defense resources - including nuclear-powered submarines for Australia.
The move could worsen the U.S. rift with China. 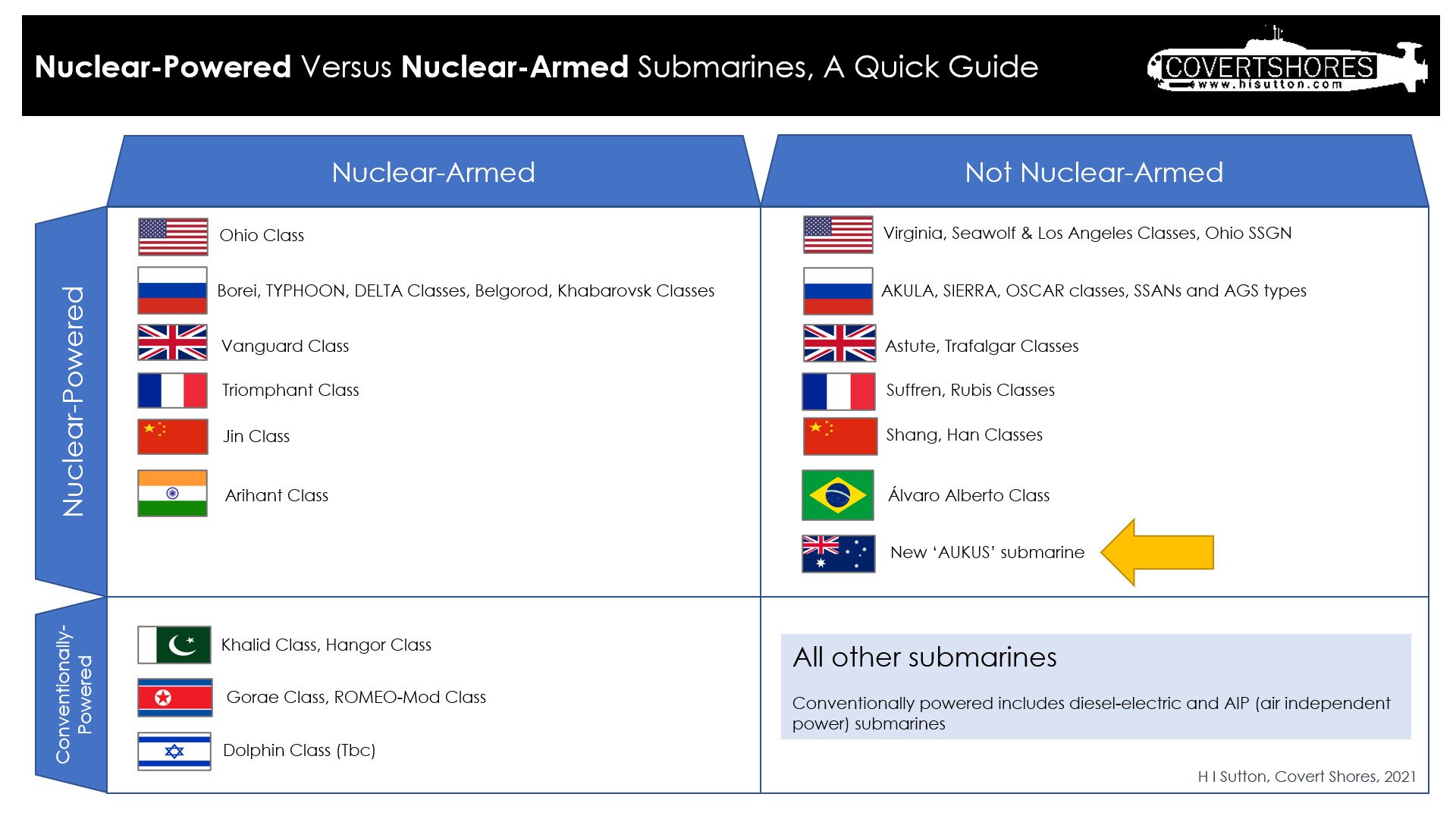 courtesy of HI Sutton
It is extraordinary that this momentous decision could be made without parliamentary or public scrutiny.
That is the real long-term significance of the deal ­– even more than the agreement to base Marines in Darwin, this deal signals that Australia is betting on the United States as a long-term partner in its region as China’s rise continues.
Australia is gambling that, over the decades-long lifespan of these submarines, the United States will remain committed to its defence and to maintaining a regional presence in the face of the largest economic and strategic challenge in American history.
The single best piece of news to come out of this announcement is that Australia will cancel the Attack-class submarine program with France’s Naval Group.
This is unquestionably a good thing.
The project was going to deliver submarines too late and at eye-watering cost.
The announcement of a trilateral “AUKUS” partnership this morning by Prime Ministers Scott Morrison and Boris Johnson and President Joe Biden was notable for different points of emphasis.
Morrison and Biden explicitly framed this agreement geographically (security in the Indo-Pacific).
Johnson did not, instead emphasising the defence-industrial benefits for Britain and historic links with Australia.
The United Kingdom has made some efforts in recent years to develop its naval presence in Asia, but that is not how Johnson chose to view this new agreement. 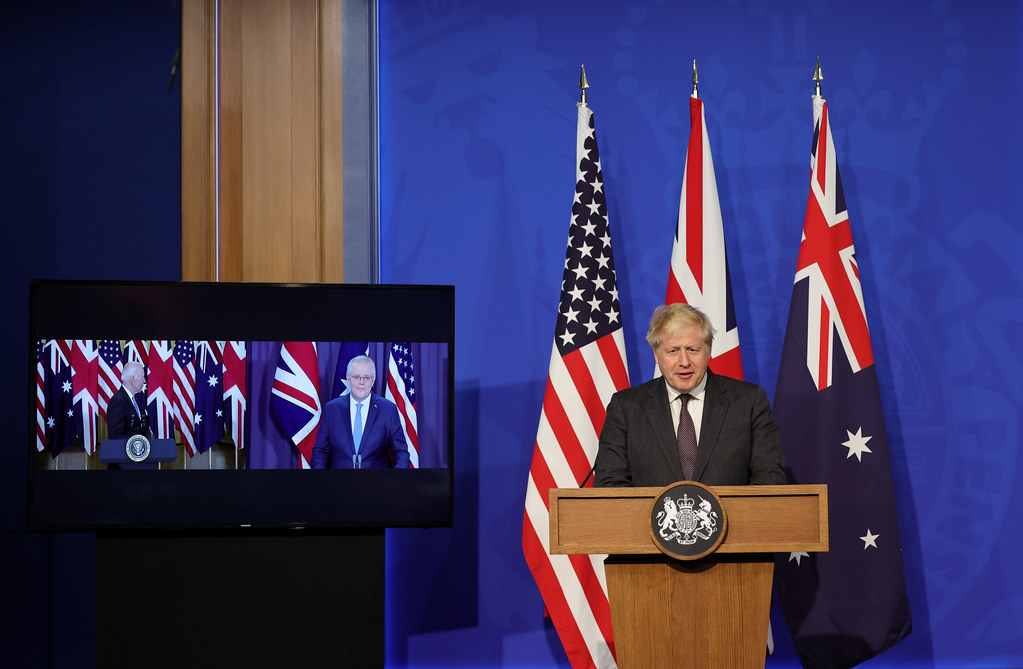 It is extraordinary that this momentous decision could be made without parliamentary or public scrutiny.
The 18-month consultation process that Morrison has announced will focus on how the submarine agreement will be implemented, and not whether it is a good idea.
Many will now begin to consider the implications of this agreement for the wider region, even beyond how China will respond.
South Korea is already edging towards the development of an indigenous nuclear-powered submarine, and it would now be no shock to see Japan take the same course.
There are still many unknowns, including relating to reports that emerged late yesterday that as an interim measure, Australia would host US nuclear submarines in Western Australia until acquiring its own. 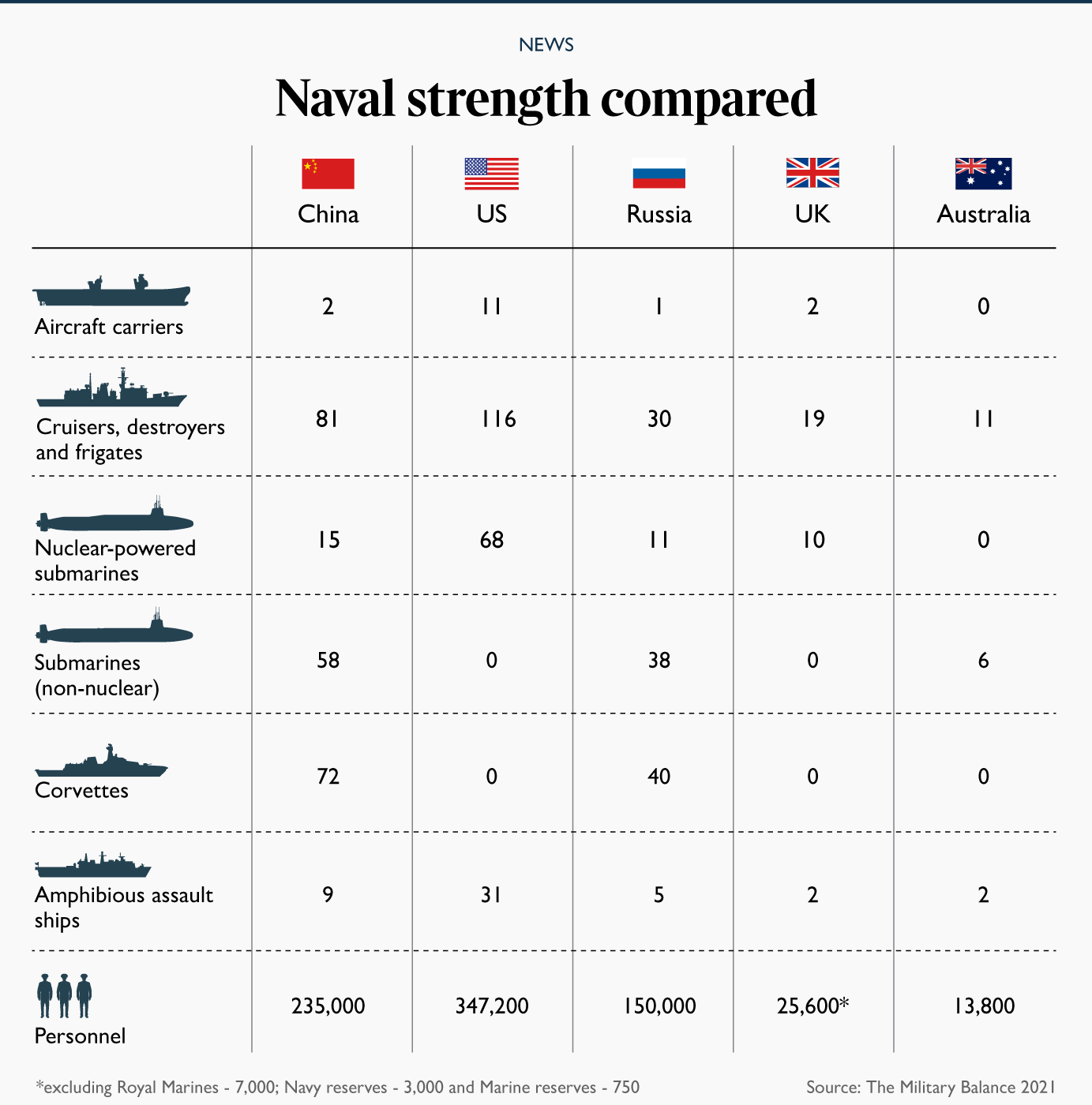 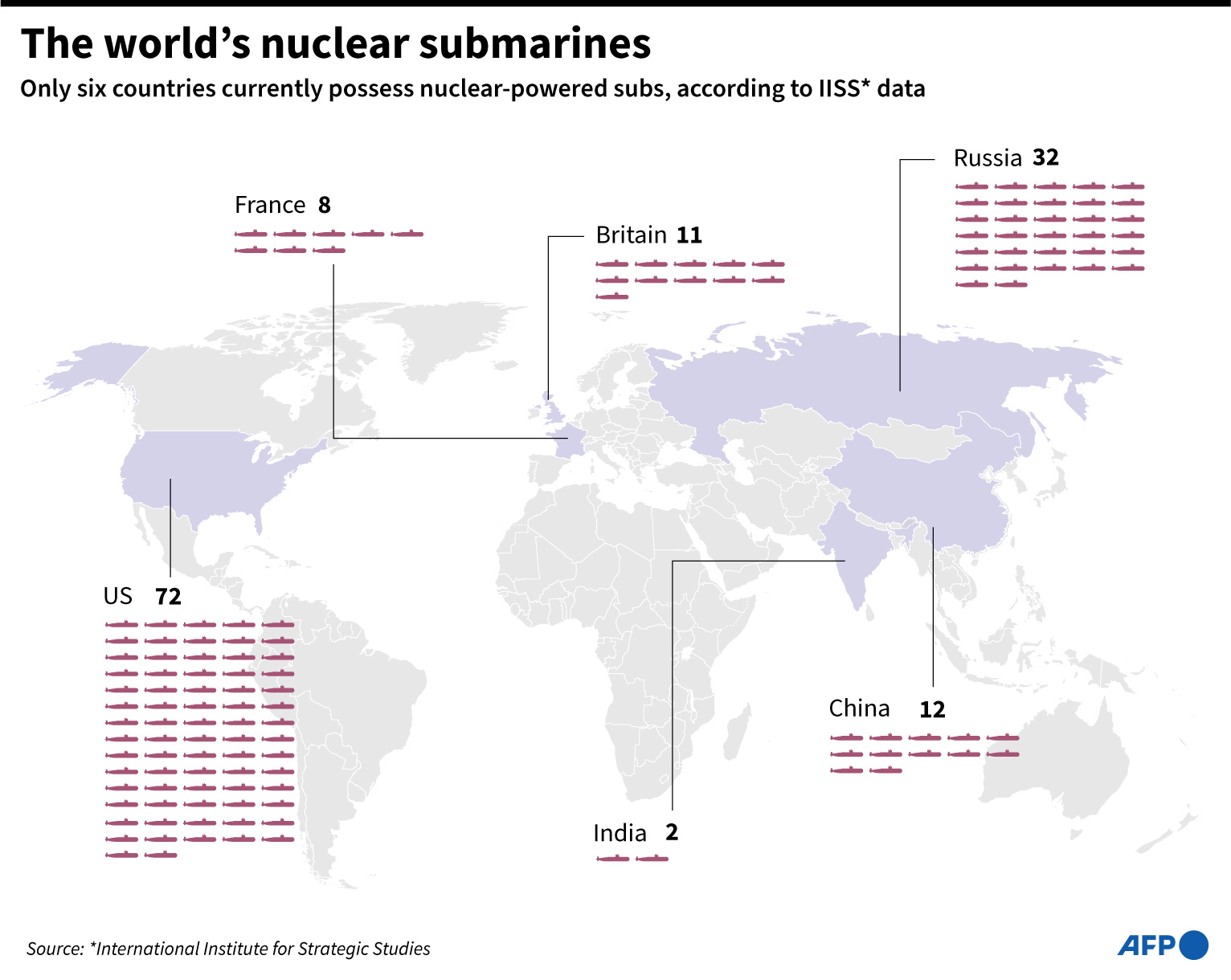 The idea that Australia would outsource its submarine capability to the US Navy for an interim period is extraordinary in itself.
Does Australia actually need nuclear-powered submarines?
It depends on what you want to achieve.

They would certainly be important assets in any allied effort to deter war with China or to defeat China if deterrence failed.
SSNs have the range and endurance needed for long-range operations together with the United States.
But because they are expensive, Australia can’t have very many, and given the sea approaches to Australia are vast and with many choke points that need to be patrolled, they are less useful for the defence of the continent.
So, if Australia believes it needs the capability to defend the Australian continent alone, then this is the wrong decision.
As already mentioned, this decision is a long-term bet on the endurance of the alliance, and on the likelihood that the US has the resolve to stay in Asia.
It is also worth saying that these submarines will be largely dependent on US and UK nuclear know how.
All the talk of recent years about Australia acquiring “sovereign” capabilities that can operate independently has gone out the window.
We had better hope that our defence and foreign policy priorities remain closely aligned with these two partners.