The coelacanth may live for a century. That’s not great news 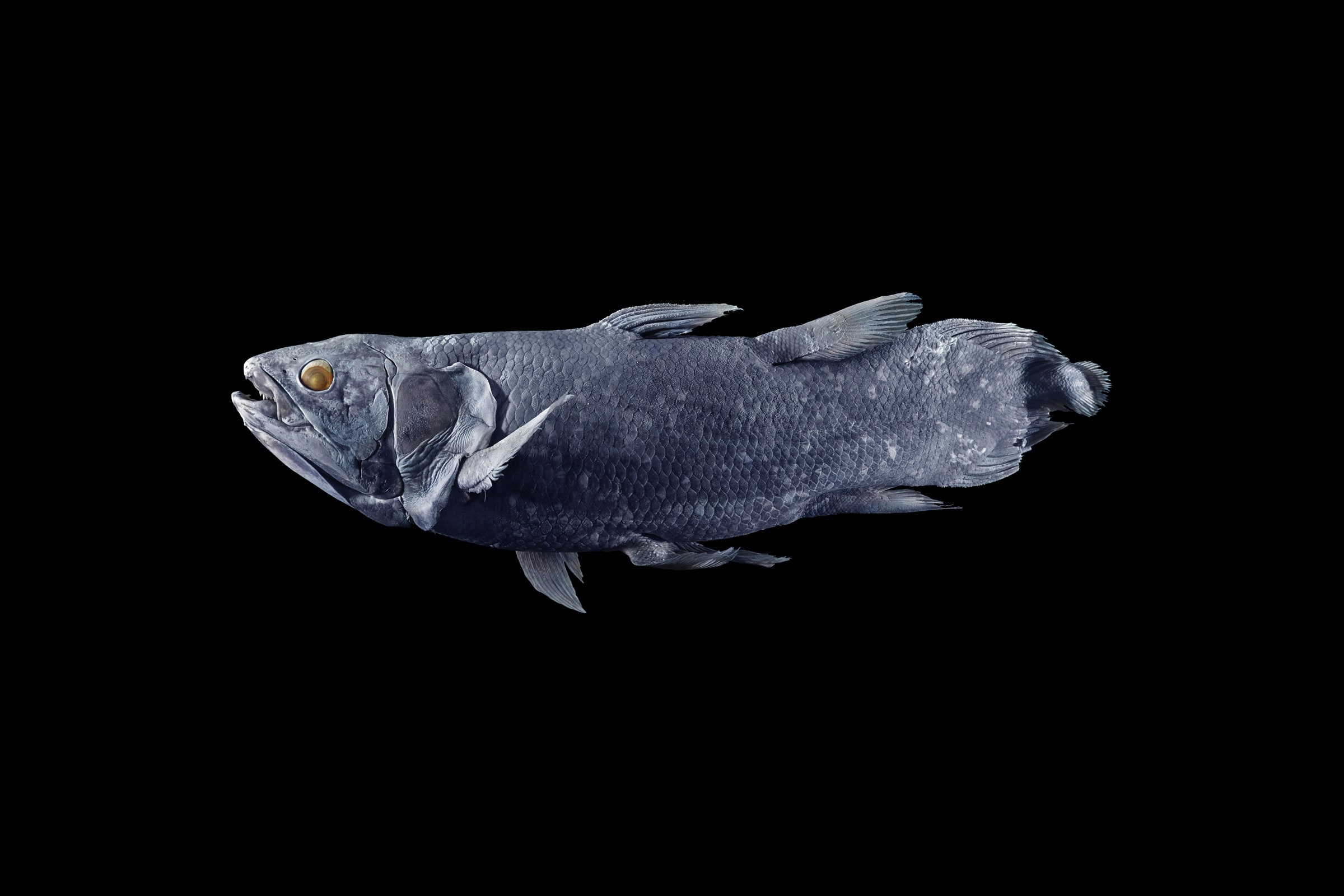 Photograph: The Natural History Museum/Science Source
From Wired by Max G. Levy
Scale markings reveal that this weird fish's lifespan is double what scientists first estimated.
That also means they’re closer to extinction than we thought.
African coelacanths are very old.
Fossil evidence dates their genesis to around 400 million years ago, and scientists thought they were extinct until 1938, when museum curator Marjorie Courtenay-Latimer noticed a live one in a fisher’s net.

Found off the southeastern coast of Africa, coelacanths also live a long time—scientists have suspected about 50 years.
But proving that lifespan has been tough.
(Coelacanths are endangered and accustomed to deep waters, so scientists can’t just stick their babies in a tank and start a timer.) Now a French research team examining their scales with polarized light has determined that they can likely live much, much longer.
“We were taken aback,” says Bruno Ernande, a marine ecologist who led the study.
The new estimated lifespan, he says, “was almost a century.”

His team from the French Institute for the Exploitation of the Sea, or IFREMER, found not only that individuals can live to nearly 100 but also that they have gestation periods of at least five years, and may not mature sexually until they’re at least 40.
The results were published on Thursday in Current Biology.
This slow-motion life highlights the importance of conservation efforts for this rare species, which is marked as “critically endangered” on the IUCN Red List.
Only about 1,000 exist in the wild, and their long gestation and late maturity are bad news for their population’s resilience to run-ins with humans.
“It's even more endangered than we previously thought,” Ernande says.

“It will have enormous consequences,” agrees Daniel Pauly, an ichthyologist from the University of British Columbia, who was not involved in the study.
Pauly is the creator of FishBase, a database of biological and ecological information about tens of thousands of species.
If a fish takes decades to spawn, then killing it wipes out its potential to replenish the population.
“A fish that needs 50 years to reach maturity, as opposed to 10 years, is five times more likely to be in trouble,” he says.

Coelacanths have thick scales that grow up to two inches long, and for decades ichthyologists have been debating how to read those scales for signs of age.
In the 1970s, researchers noticed small calcified structures on them.
They figured the rings were age markers, like tree rings.
They disagreed, however, on how to count them: Some figured that each marking denoted one year; others believed that seasonal flips created two rings per year.
At the time, the best guess placed their life expectancy at about 22 years.
That conclusion, which meant that a 6-foot, 200-pound coelacanth is 17 years old, implied that they grow very quickly: “They would grow as fast as tuna, which is crazy,” Pauly says.

It’s crazy because these are animals with slow metabolisms, which should indicate slow growth.
Coelacanths’ hemoglobin is adapted to that slow metabolism, which means they can’t take in enough oxygen to support a fast-growing fish.
Some argue that their small gills are further evidence of oxygen limitations.
They also live very passive lifestyles, resting most of the day in caves and lumbering slowly through the ocean’s twilight zone, down at 650 feet and below, when they do deign to move around.
“Overwhelmingly, the biological features were pointing to a slow-living fish,” says Ernande.

Plus, scientists tracking the lives of individual coelacanths have known that 20 years is far too low.
In the 1980s, researchers started sending submersibles and remote-operated vehicles down to a cave harboring 300 to 400 coelacanths.
They returned to this spot for over 20 years.
During each visit, they recognized individuals by their characteristic white markings.
Only about three or four fish in this group would die, and an equal number of new ones would be born, each year.
This observation provided striking evidence that coelacanths live long lives—even more than 100 years, that study argues.

But a population assessment doesn’t pin down age or lifespan directly.
Intrigued by this gap, Ernande and his colleagues began tackling coelacanth age as a “fun side project.” He and the study’s lead author, Kélig Mahé, had been determining the ages of species that are commercially fished.
Knowing the relationship between a fish’s age and its size helps forecast—and conserve—future populations.
They figured they’d conduct a similar analysis for the coelacanth, but since they are endangered, they couldn't fish for them or find any in an aquarium.
They instead requested museum specimens from France and Germany. 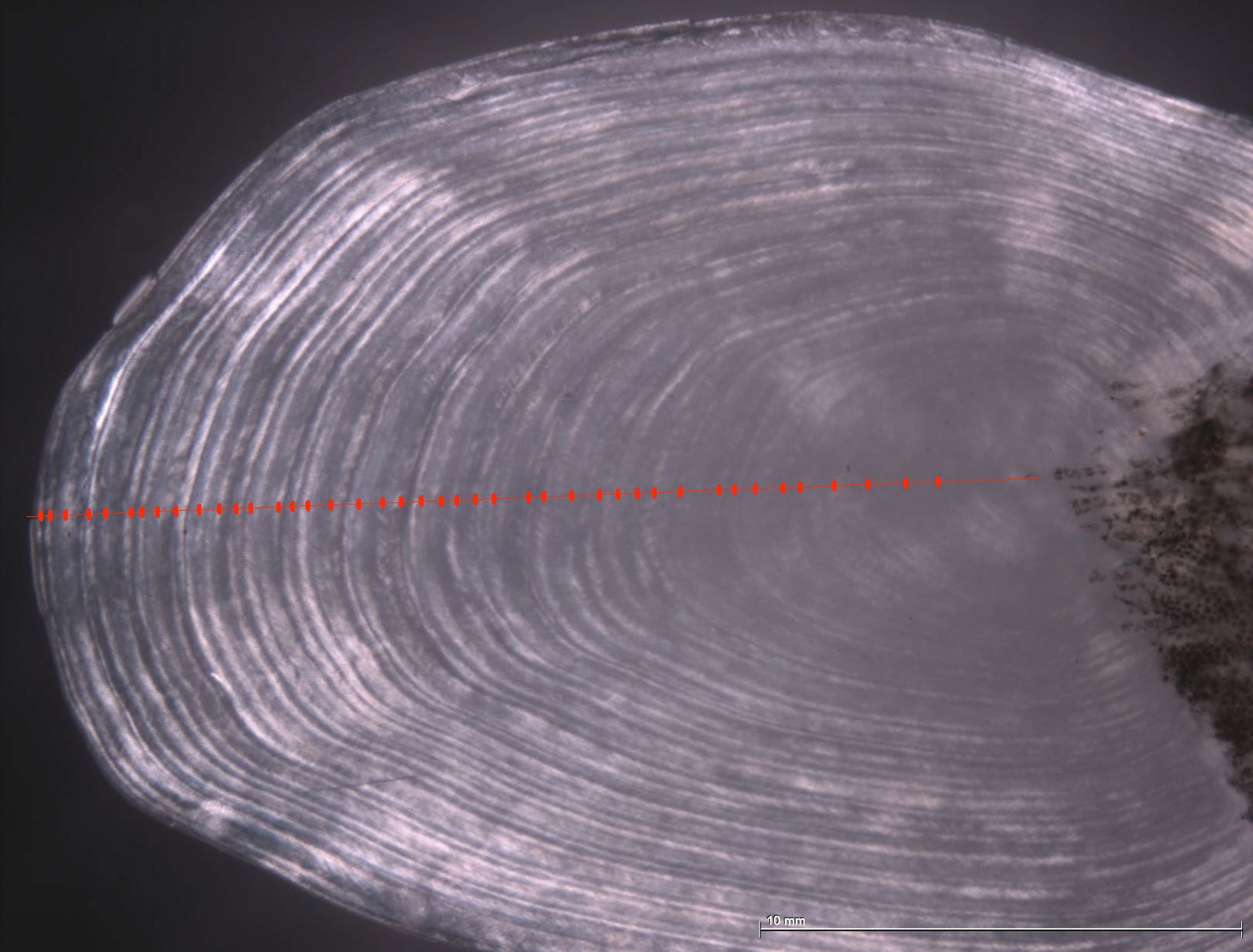 The usual way of determining a fish's age is by looking at its otoliths, inner-ear stones that fish use for hearing; they also record the passing years as the calcium carbonate builds up.
But otoliths are inside fish heads.
Would the French National Museum of Natural History let researchers chop open their prized collection to dig out the little stone for a "fun side project"?

The team didn’t even bother asking.

Instead they focused on examining the fish’s scales.
In previous studies devoted to counting their rings, researchers had examined them by microscope under regular light.
Mahé had something else in mind: polarized light.
Light waves normally vibrate every which way, not just the direction in which the wave is traveling.
Polarized light is like streaking a comb through messy hair—all the waves now vibrate in the same plane.
(The glare of sunlight bouncing off a river is polarized; that’s why polarized sunglasses can filter that entire bundle of rays out simultaneously.) When light hits a sample containing minerals—as calcified fish scale structures do—the polarized light exaggerates these minerals against the rest of the scale, making otherwise invisible structures visible.

The polarized light microscope revealed five times more rings in the coelacanth’s scales than anyone had seen before.
These “circuli” were much more fine than the larger and sparse “macrocirculi” that had been observed in the ’70s, and they appeared across all of the museum’s 27 specimens, which ranged from embryos to nearly full-grown adults.
Counting circuli told a completely new story: Coelacanths grow very slowly, and they can live extremely long.
A coelacanth thought to be 17 years old, if you only counted its macrocirculi, would instead be about 85.

To validate the new approach, the team charted the relationship between each fish’s size and age.
Like other fish, coelacanths should grow logarithmically—at first a period of fast growth, followed by a slow plateau as they approach a maximum lifespan.
The new ages made sense.
Smaller specimens fit neatly in the range they would expect of a fast-growing adolescent, and the largest specimens fit in a slower-growth phase that plateaued near 2 meters and around 100 years old.

The rings found on two large embryos also suggested that they gestate for at least five years.
“As far as we know, this is the longest gestation period for a fish,” Ernande says.

Coelacanths become reproductively mature when they’re about 5 feet long.
And based on the growth model for the species, Ernande’s team concluded, coelacanths don’t reach that length until they are 40 to 69 years old.
That time until sexual maturity is among the longest of any known species.

“That is crazy old,” says Prosanta Chakrabarty, an ichthyologist from Louisiana State University who is not involved in the study.
“So old that it makes me kind of dubious, to be honest.” He completely buys the team’s lifespan conclusion.
But, he says, the deduction that coelacanths can’t reproduce until halfway to two-thirds of the way into it is extraordinary.
And extraordinary claims need extraordinary evidence.

The age range for spawning may be off, since it’s deduced from previously reported sizes of mature individuals and their model for determining age from size.
To him, the team could solidify the sexual maturity conclusion by accessing one or two coelacanth otoliths or repeating the same scale analysis in other species of fish.
“It just comes down to scales,” Chakrabarty says.
“Show me that the scales on a orange roughy, which can also live 100 years, would work in the same way.” Lungfish, a fellow long-lived and limb-finned fish like the coelacanth, could also provide extra assurance in the method, he says.

Ernande shares Chakrabarty’s caution.
But since ichthyologists are fairly confident that coelacanths don’t mature while smaller, and coelacanths clearly grow slowly, Ernande is satisfied with his team’s conclusion.
“Even though it might not be 50, but 40, or 35, it's still a very old age.
That's for sure,” he says. 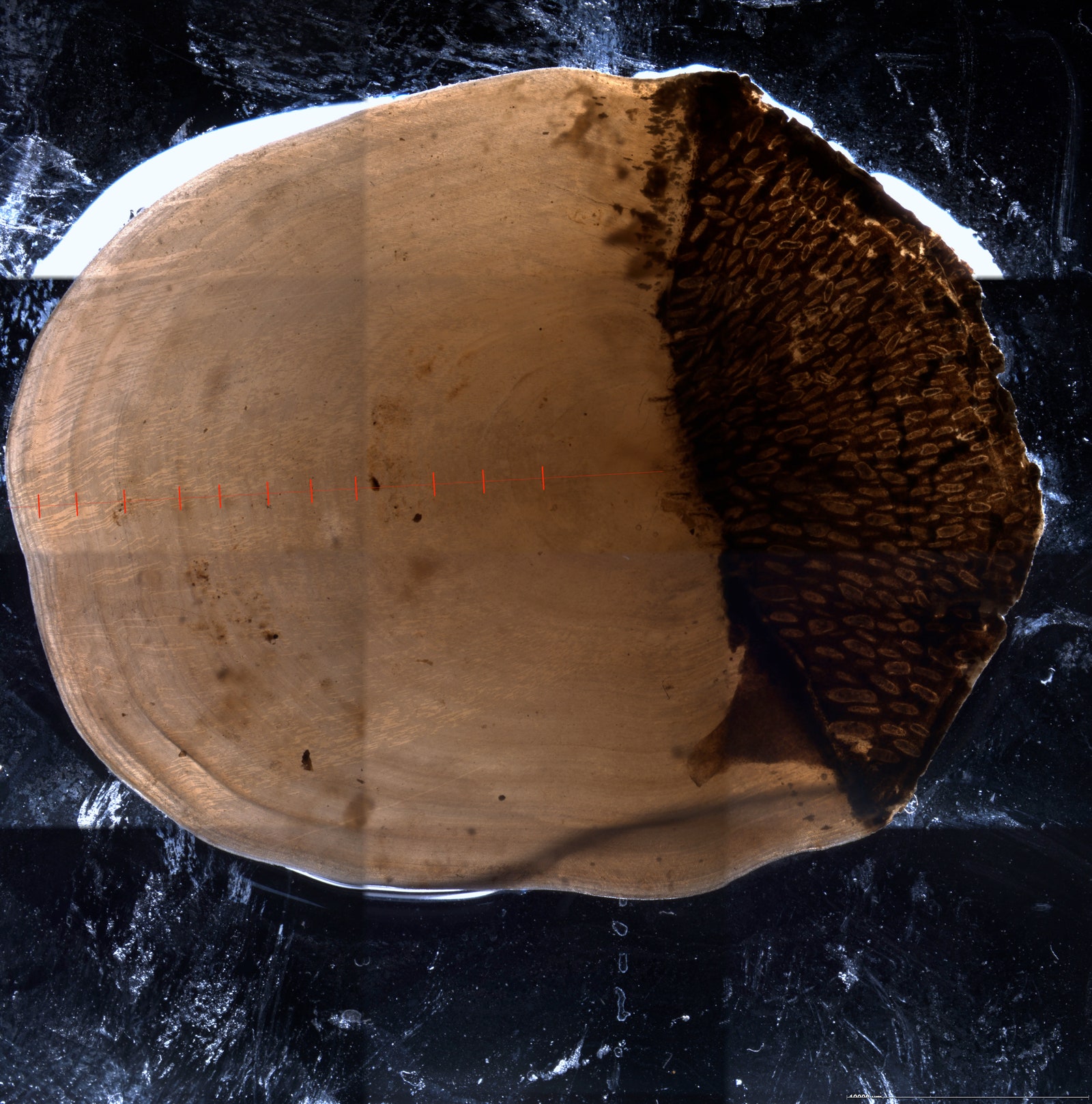 Photograph: Marc Herbin/MNHN
Pauly is not surprised that coelacanths take so long to mature:
“Fish don't know their age, they know their size.
When a fish gets bigger, it has more trouble breathing.
Their body grows in volume, but the gills only grow in surface area.
So as the surface-to-volume ratio decreases.
At about one third of their maximum weight, a transition to sexual maturity begins.
“This tension between the gills and the body—between the oxygen supply and the oxygen need—triggers a transition to do spawning,” Pauly says.

The coelacanth’s delayed sexual maturity and long gestation suggests that conservation efforts are extra important, because any animal that’s lost cannot be quickly replaced.
If it takes 40 years for an individual to mature and five more to gestate, removing any adult would make the population “quickly collapse,” Pauly says.

Their unique look and reputation for long life has made coelacanths vulnerable to illegal trafficking and incidental catches in Madagascar.
People in the neighboring Comoros Islands sometimes fish them as well.
“They were using the scales like sandpaper for their bicycles,” according to Pauly.

A team of divers off the coast of South Africa comes face to face with a Coelacanth.
Ernande’s team has turned their side project into a major focus area—they now plan to expand their analysis with more and larger specimens.
(Perhaps a larger coelacanth might even be older than 100.)
And a new area of focus for them will be measuring the fish’s climate resilience.
If coelacanths struggle to extract oxygen from warmer water, evidence could show up in their scale rings.
If warm water years show up as tighter rings, that’d mean they are growing slower and maturing later as the planet warms—more bad news for coelacanths.
His team won’t know until they glean more stories from the coelacanths’ anatomy.
They hope these life stories and climate stories told on a yearly timescale, printed finely on scales of a different sort, will not be cut short.
Links :
Posted by geogarage at 1:42 AM