The Mayflower Autonomous Ship will set sail in September 2020, 400 years after the first Mayflower, and this time AI and other advanced technologies will be at the helm.

From BBC by Jen Coperstake

A fully autonomous ship tracing the journey of the Mayflower is being built by a UK-based team, with help from tech firm IBM.

The Mayflower Autonomous Ship, or MAS, will launch from Plymouth in the UK in September 2020.

Its voyage will mark the 400th anniversary of the pilgrim ship which brought European settlers to America in 1620.

IBM is providing artificial intelligence systems for the ship. 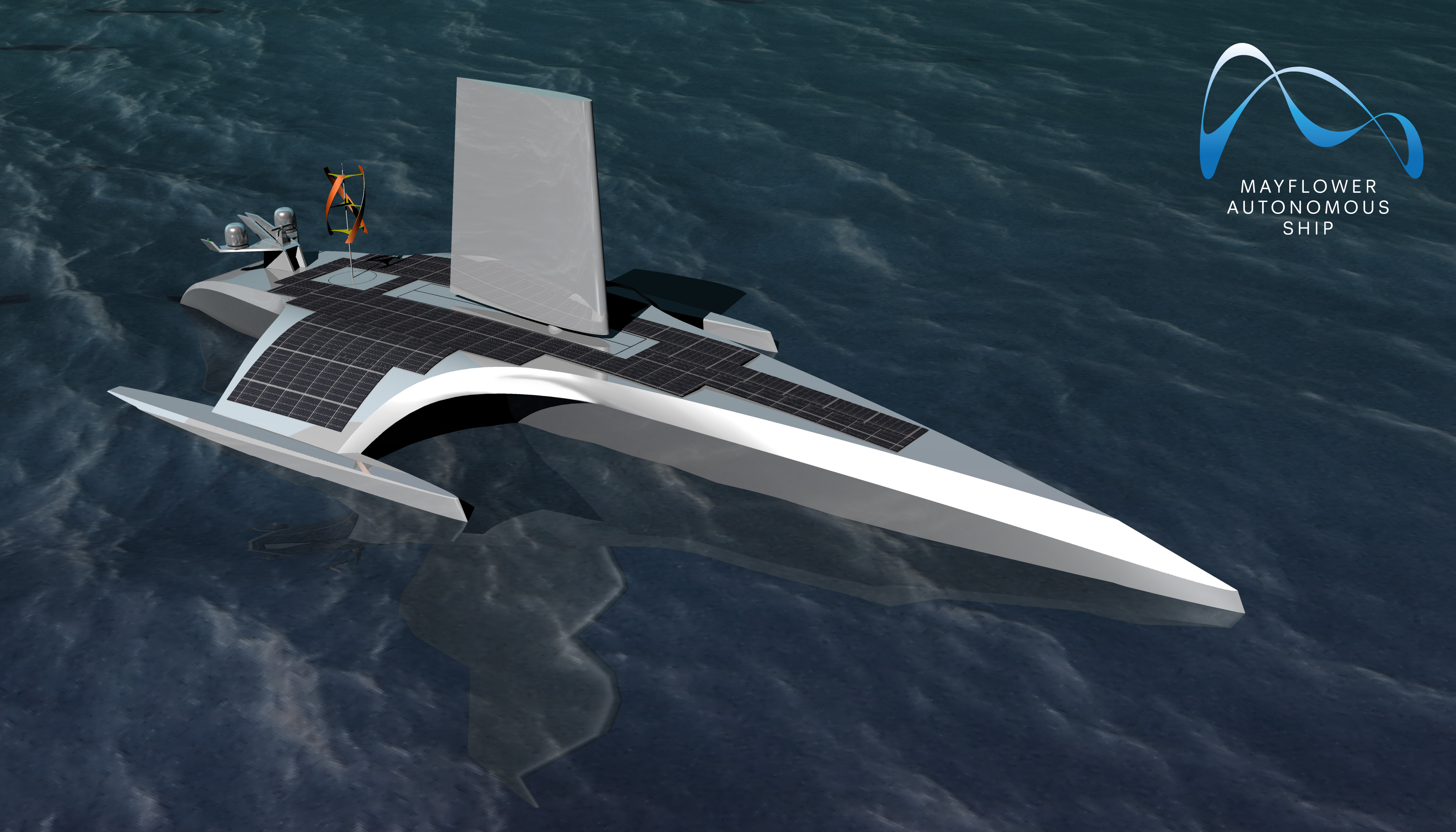 The vessel will make its own decisions on its course and collision avoidance, and will even make expensive satellite phone calls back to base if it deems it necessary.
Data on hundreds of ships has already been collected in Plymouth Sound to feed its machine-learning algorithms.

400 years ago, on 6 September 1620, the Mayflower set sail from Plymouth to Massachusetts, with 102 passengers and around 30 crew members.

The original journey took more than two months, landing at what is now Plymouth, Massachusetts, on 21 December 1620.
The passengers onboard, mainly Christian Puritans, became known as pilgrims. 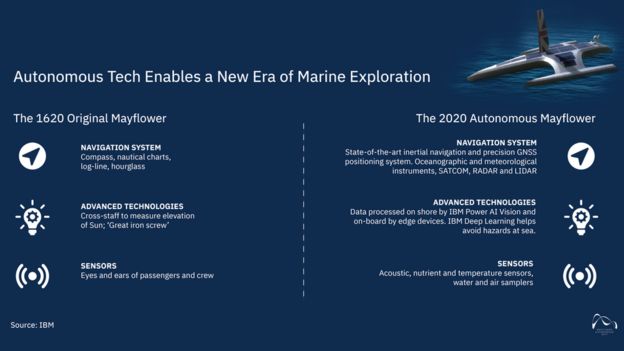 A comparison of the original Mayflower with its futuristic version

This vessel will repeat their journey but without any humans on board, and a much faster anticipated crossing time of two weeks.

The ship is being built by ProMare - a non-profit marine research organisation - along with IBM.

The project's director, Brett Phaneuf, has ancestral roots in the area where the Mayflower landed on America's east coast, dating back to 1628.
Mr Phaneuf grew up in New England hearing family folklore about the early settlers, and visiting sites connected to the crossing.
He now lives in Plymouth, UK, and was inspired by his history to contribute to the commemorations of the 400th anniversary of the Mayflower.
But he wasn't interested in building a simple replica of the ship.
"Nothing really was going to do it justice," Mr Phaneuf says.
"My immediate interest is in autonomy and we needed something that would speak to the next 400 years."

The ship is a trimaran with one very long slender main hull optimized for propulsive efficiency.
The two smaller hulls are for stabilization and provide the surface area for the solar panels.
The vessel will run on solar and wind power, with an emergency diesel backup generator if needed.
The hull of the ship is currently under construction in Gdansk, Poland, and is due to arrive in Plymouth next February.

"On a ship with no people there is a huge amount of volume left to do things with - there's nowhere for people to sleep, no need for storing food or water - all the things that keep people alive go away," says Mr Phaneuf.

Mr Phaneuf says many ships already have highly automated systems, but keep skeleton crews of 6-12 people.
"The ship is going to do oceanographic research but it is also an active test platform for artificial intelligence and machine-learning algorithms for collision avoidance," he says.
The team will keep an eye on its progress from a control centre in Plymouth and can take over if there is an emergency.
"Once it's past the Isles of Scilly, it's on its own," says Mr Phaneuf.

IBM's deep learning software will help the vessel collect and analyse data to avoid collisions at sea, according to the company's chief technology officer Dr Andy Stanford-Clark.
"We are fusing all that data to create a multi-dimensional view of the world," he says.
"The ship can't keep going back to the cloud and saying 'can you check on this' as there will be long periods of time where there is no connectivity," says Dr Stanford-Clark.

The ship will use IBM's sophisticated operational decision maker (ODM) tool, which is also used by the financial industry to produce billions of complex functions. 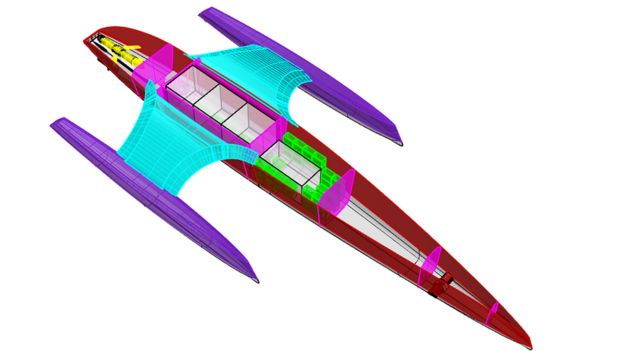 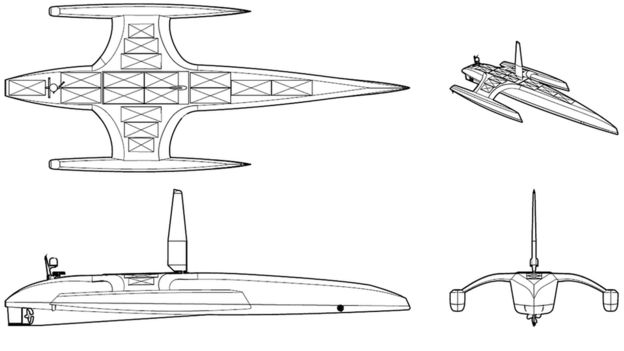 Three research pods in the hull of the ship are being designed by scientists at the UK's University of Plymouth.
Director of the University's Marine Institute, Richard Thomson OBE, says the voyage is the first opportunity to sample the oceans for plastics, from an unmanned vessel.
Professor Thomson coined the term microplastics in a paper published 15 years ago, to describe the accumulation of fragments of plastic in the world's oceans.
'We're trying to construct a heat map of the problem but it is based on pinpoint sampling and extrapolation," he says.
"This is an opportunity to get a much deeper and data-rich picture of the situation."

The ship's ability to make its own decisions based on immediate data availability could lead researchers to remote areas where they wouldn't otherwise think to go.
"In the future, ten years from now, if the boat is in the middle of the deep Indian Ocean, and it detects something unusual but its humans want it to do something else, it can divert itself, as it will be seeing more data and say 'this is where I want to go'," says Mr Phaneuf. 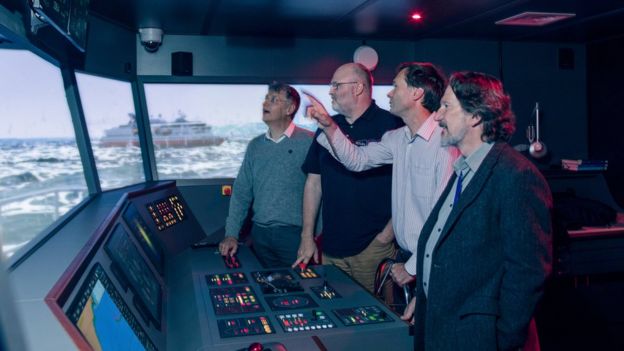 The team inside the Mayflower Autonomous Ship mission simulation room

A future of autonomous vessels roaming across the world's oceans brings up several issues around insurance, cyber-security and piracy.

Mr Phaneuf says this first voyage is being insured by insurance company Gard, which wanted to be the first company to insure an unmanned ocean vessel.

The main threat in the North Atlantic, he says, will come from the weather and the ocean conditions, rather than other vessels.
But not knowing what the ship will find is an exciting prospect.
"We know more about the surface of the moon than the surface of the ocean.
This is the first of many ships that will bring us to that state of knowledge," Mr Phaneuf says.