No sailors needed: robot sailboats scour the oceans for data

Two robotic sailboats trace lawn-mower-style paths across the violent surface of the Bering Sea, off the coast of Alaska.
The boats are counting fish — haddock, to be specific — with a fancy version of the fish finder sonar you’d find on a bass fishing boat. 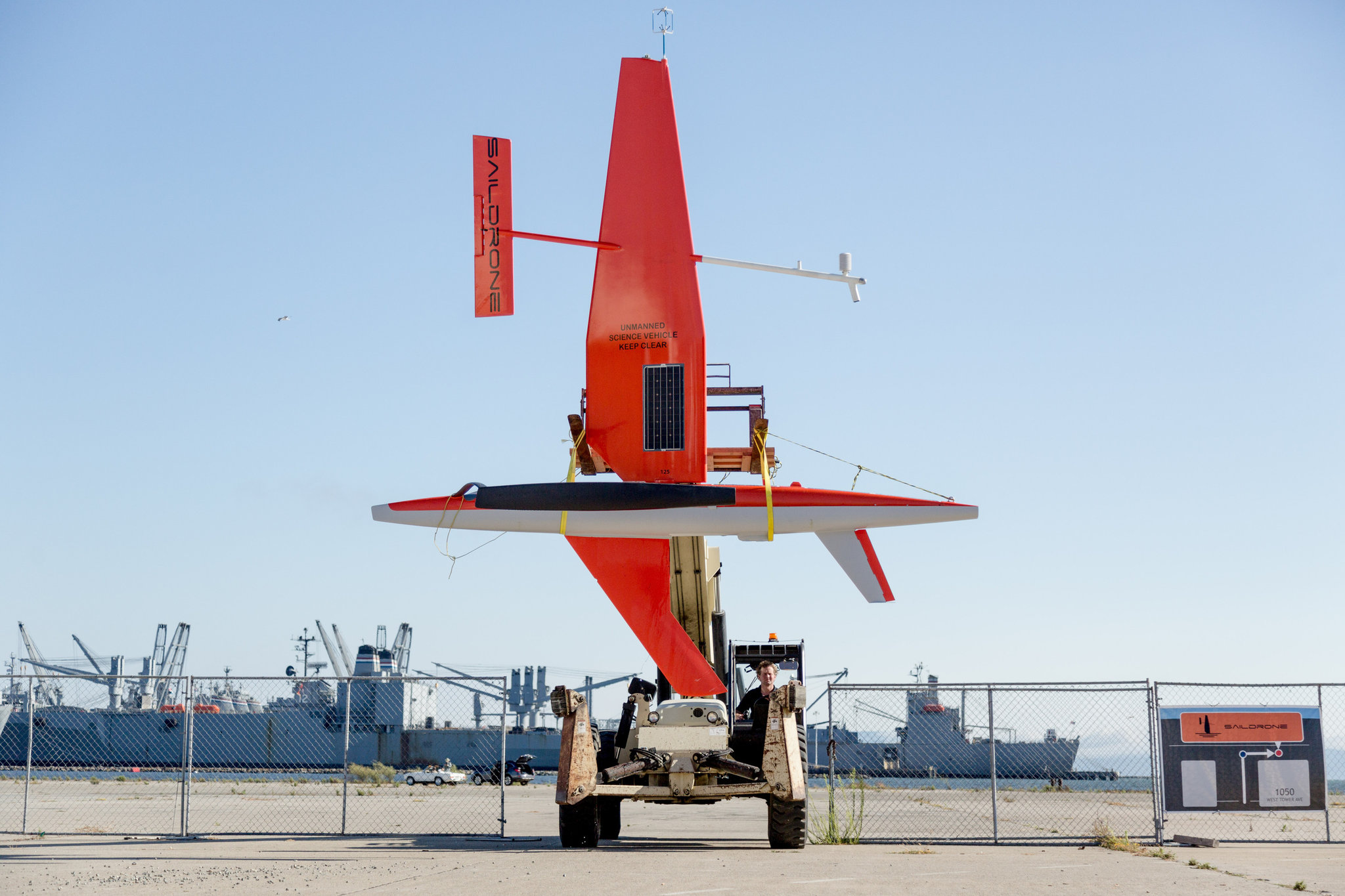 A Saildrone boat being carried back to its hangar in Alameda, Calif.
The self-sailing vessel can gather research data much more cheaply than ships with crews.
Credit Jason Henry for The New York Times

About 2,500 miles away, Richard Jenkins, a mechanical engineer and part-time daredevil, is tracking the robot sailboats on a large projection screen in an old hangar that used to be part of the Alameda Naval Air Station.
Now the hangar is the command center of a little company called Saildrone.
At least 20 companies are chasing the possibly quixotic dream of a self-driving car in Silicon Valley.
But self-sailing boats are already a real business.
While they are counting fish, Saildrone’s boats are also monitoring the seals that feed on the fish by tracking transponders that scientists have attached to the heads of the seals.
“We can tell them what size fish they are eating and why they are going there,” said Mr.
Jenkins, who is the chief executive and a co-founder of the company.


The Saildrone is a wind powered autonomous vehicle controlled from shore via satellite communications.
As part of the Innovative Technology for Arctic Exploration program, PMEL partnered with two NOAA Cooperative Institutes and Saildrone Inc. to deploy two Saildrones on a 97 day mission in the Bering Sea in the spring of 2015 .

Last summer, working with scientists and engineers from the National Oceanic and Atmospheric Administration, the boats skimmed along the edge of the retreating Arctic ice cap, giving scientists a detailed account of temperature, salinity and ecosystem information that would have been difficult and expensive to obtain in person.

The Saildrone autonomous sailboats look a little like shrunken America’s Cup racing yachts — small trimarans with hard, carbon-fiber sails.
The Saildrone’s carbon fiber sail acts like an aircraft wing.
When air passes over it, thrust is created.
The sail is stabilized by a counterweight that is placed in front of it and a tab trailing behind it that can automatically make small corrections to make sure it maintains an efficient angle to the wind.
Underneath the boat are both a rudder to aid in steering and a keel, which will right the boat if it is knocked over.
The big difference, of course, is that there are no sailors on board.
The boats are controlled through communications satellites from the operations center here as they collect oceanographic data and monitor fish stocks and the environment. 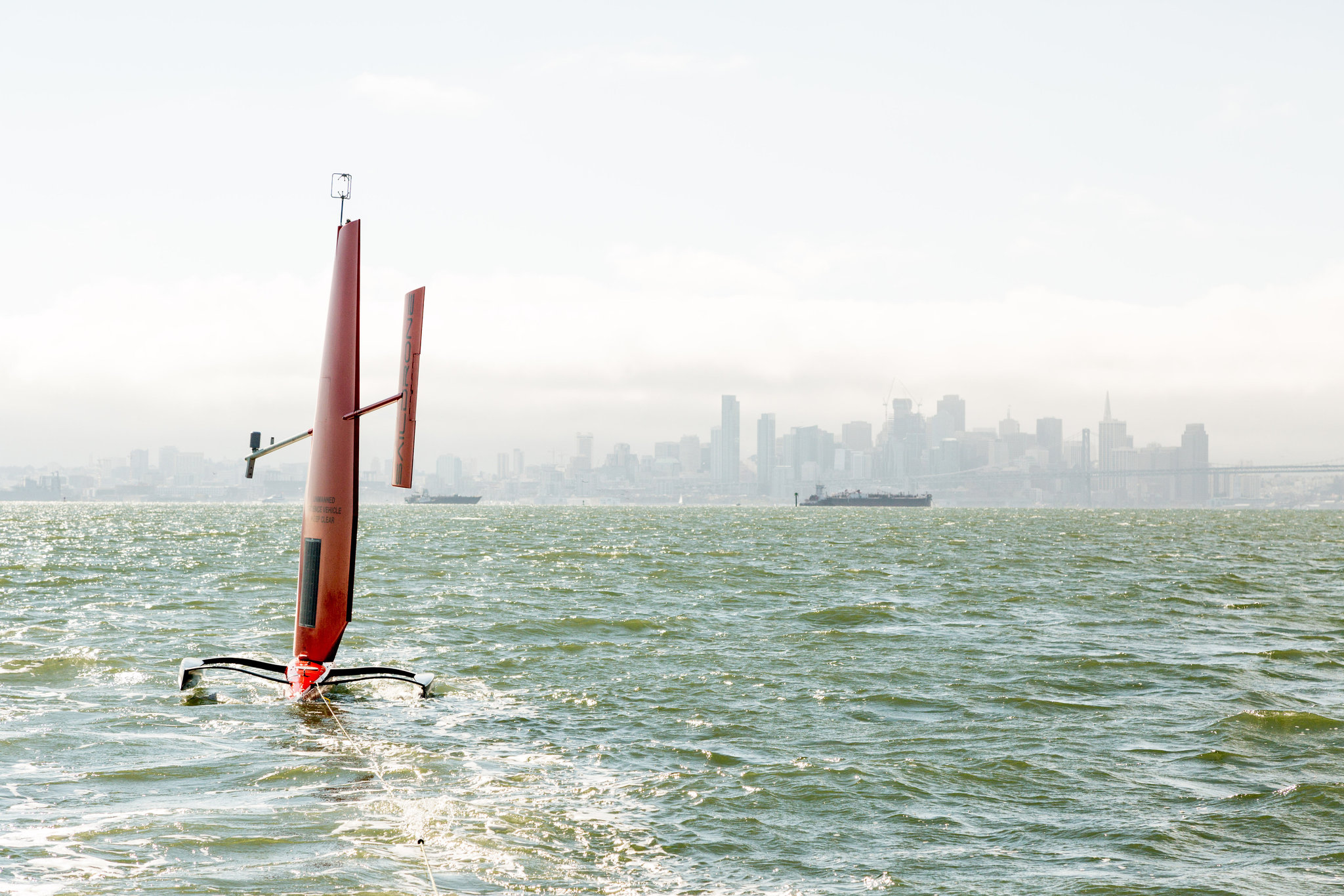 A saildrone boat in San Francisco Bay.
The drone is a trimaran with a carbon-fiber sail.
Jason Henry for The New York Times

One day, they may be used for weather prediction, oil and gas industry ocean operations, or even to police illegal fishing.
Mr. Jenkins has a much grander vision.
He believes the missing piece of the puzzle to definitively comprehend the consequences of global warming is scientific data.
He envisions a fleet of thousands or even tens of thousands of his 23-foot sailboats creating a web of sensors across the world’s oceans.
Vast amounts of data collected by his robots could reveal with greater detail the extent and rate at which global warming might become an existential threat to humanity and whether it is happening in decades rather than centuries.
That is, if someone is willing to pay for all that.
The boats are not sold — the scientists, commercial fisherman and weather predictors pay a $2,500-a-day fee per boat for the data they produce. 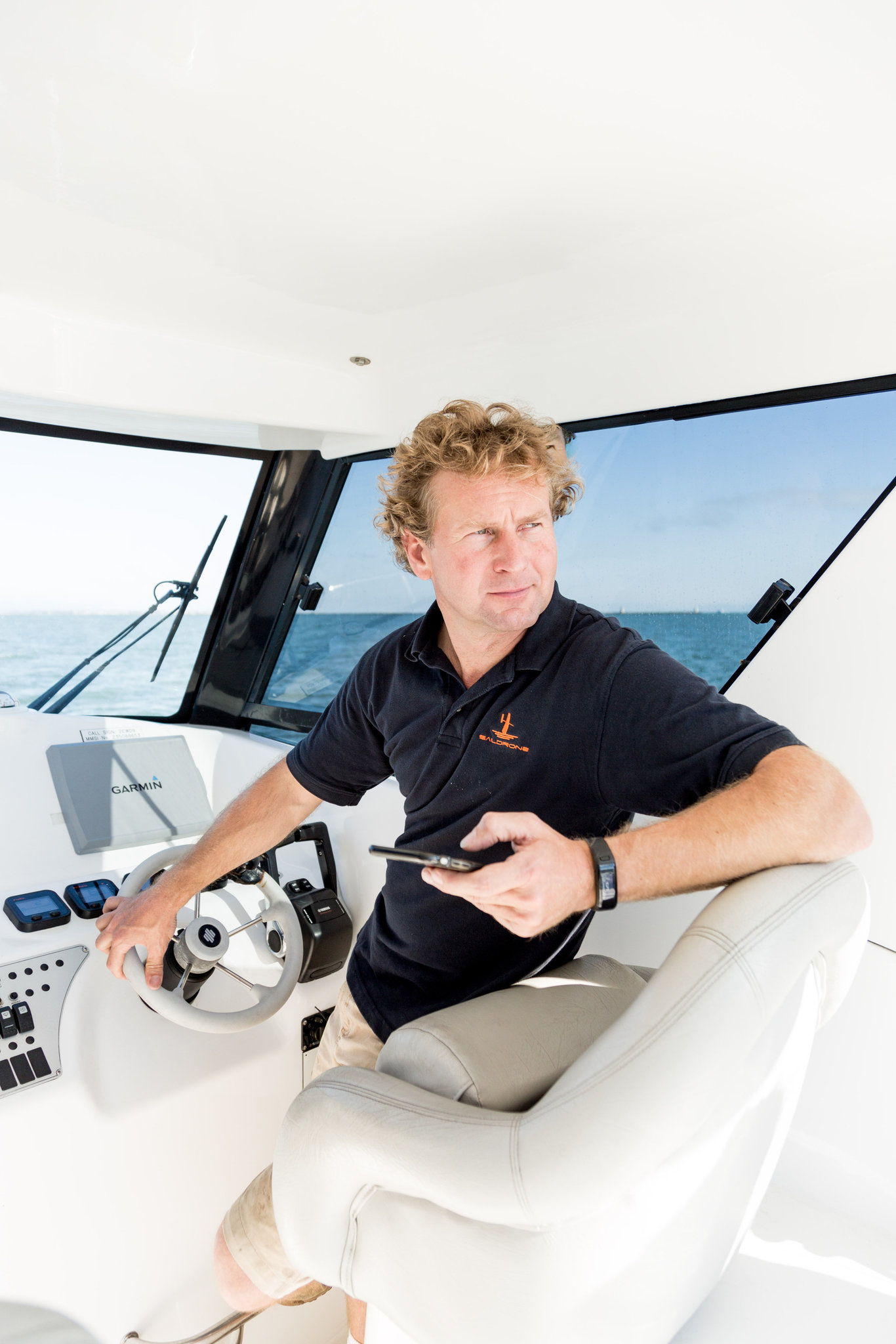 Richard Jenkins uses a smartphone to plug in coordinates and communicate with the drone.
Jason Henry for The New York Times

Saildrone got its start with $2.5 million in grants from Eric Schmidt, Google’s executive chairman, and his wife, Wendy Schmidt.
And Mr. Jenkins’s company recently received $14 million in financing from three socially minded venture capital firms: Social Capital, Lux and Capricorn.
“My interest in Saildrone is very practical,” said Chamath Palihapitiya, a former Facebook executive who is the founder of Social Capital.
“Let’s stop arguing about what is happening, and let’s measure.
Once you have data and it’s statistically significant and valid, then we can get to the next step, which is to find what the structural reforms are that need to happen.”

Data capabilities
Missions can last  6 - 12 months, with all data streamed live via satellite
and accessible via Saildrone's API.

Each boat is packed with an armory of scientific sensors that beam data back to the control center.
“It’s not so much taking the earth’s temperature as it is its pulse,” said Mr. Jenkins, a 39-year-old, tousle-haired mechanical engineer who was trained at Imperial College London.
He has found willing clients in ocean scientists and engineers who previously had limited ways to collect highly specific and accurate data about the ocean surface.
“Richard had a great boat but no scientific sensors on it, and we had sensors but no boat,” said Christian Meinig, the director of engineering at the NOAA Pacific Marine Environmental Laboratory.
The scientists at the laboratory have already begun to use the boats to enhance their study of the El Niño warm-water pattern in the Pacific Ocean.

The breakthrough for the robots was a sailboat design that Mr. Jenkins originally began pursuing when he set out to capture the world land-sailing speed record in 1999.
He succeeded in 2009 in a “land yacht” called Greenbird that reached a speed of 126.2 m.p.h.
on a dry lake bed in Southern California.
To reach such a high speed and remain stable, Mr. Jenkins replaced the traditional sailboat sail with a rigid vertical carbon-fiber wing coupled with a unique stabilizer trailing behind the wing that would automatically adjust the wing faster than a human sailor could respond by pulling ropes.
He has repurposed the wing to sail at slower speeds and to autonomously travel anywhere in the world.

Last year, in an experiment, one of the Saildrone boats made its way from Alameda to the Equator in 42 days, collecting a wealth of ocean surface data along the way.
A scientific research vessel with a large human crew would be faster, but it would cost about $80,000 a day.

Saildrones deployed in the Gulf of Mexico,  demonstrating safe and precise piloting in one of the most challenging environments.

That researchers can move the autonomous boats — unlike the static ocean buoys that are now typically used — is significant, because it allows scientists to alter collection patterns in response to ocean conditions and interesting discoveries.
“A self-correcting model is really a superpowerful way of doing things,” said Christopher Sabine, an oceanographer who is director of Pacific Marine Environmental Laboratory.
“For climate modeling we need to know what’s going on year-round, and to be perfectly frank, we don’t like to go out into the middle of winter.”

Saildrone is not the only autonomous vehicle on the sea.
Liquid Robotics, based in Sunnyvale, Calif., makes a boat called Wave Glider, which uses wave rather than wind action to move at more than two knots and carry up to 100 pounds of instruments.
The Saildrone payload is more than twice as large, and the boat is potentially twice as fast.

The sensor suite is made up of more than a dozen instruments that capture wind speeds, radiation, still and video imagery, temperature, ocean chemistry, and other data.

1-minute glimpse into the preparation work conducted for the collaborative 2016 research cruise between NOAA, Saildrone, Inc. and the University of Washington. Courtesy of NOAA Fisheries

Mr. Jenkins’s contention is that a fleet of robot sensors spread across an ocean like the Pacific will make a huge difference in both weather and climate prediction.
For example, a better understanding of a weather phenomenon like El Niño could make a difference worth hundreds of millions of dollars.
“They completely failed to see the last one coming,” he said, noting that climate scientists acknowledge they don’t have the spatial resolution to make accurate predictions.
“They have a pressing need for more data.”