Introducing Microsoft Project Natick, a Microsoft research project to manufacture and operate an underwater datacenter.
The initial experimental prototype vessel, christened the Leona Philpot after a popular Xbox game character, was operated on the seafloor approximately one kilometer off the Pacific coast of the United States from August to November of 2015.
Project Natick reflects Microsoft’s ongoing quest for cloud datacenter solutions that offer rapid provisioning, lower costs, high responsiveness, and are more environmentally sustainable.

Taking a page from Jules Verne, researchers at Microsoft believe the future of data centers may be under the sea.

Microsoft has tested a prototype of a self-contained data center that can operate hundreds of feet below the surface of the ocean, eliminating one of the technology industry’s most expensive problems: the air-conditioning bill.
Today’s data centers, which power everything from streaming video to social networking and email, contain thousands of computer servers generating lots of heat.
When there is too much heat, the servers crash.
Putting the gear under cold ocean water could fix the problem.
It may also answer the exponentially growing energy demands of the computing world because Microsoft is considering pairing the system either with a turbine or a tidal energy system to generate electricity.
The effort, code-named Project Natick, might lead to strands of giant steel tubes linked by fiber optic cables placed on the seafloor.
Another possibility would suspend containers shaped like jelly beans beneath the surface to capture the ocean current with turbines that generate electricity.

Ben Cutler, left, and Norman Whitaker, both of Microsoft Research, with the “Leona Philpot,” a prototype underwater data center, at the company’s headquarters in Redmond, Wash.
Credit Matt Lutton for The New York Times

“When I first heard about this I thought, ‘Water ... electricity, why would you do that?’ ” said Ben Cutler, a Microsoft computer designer who is one of the engineers who worked on the Project Natick system.
“But as you think more about it, it actually makes a lot of sense.”
Such a radical idea could run into stumbling blocks, including environmental concerns and unforeseen technical issues.
But the Microsoft researchers believe that by mass producing the capsules, they could shorten the deployment time of new data centers from the two years it now takes on land to just 90 days, offering a huge cost advantage.
The underwater server containers could also help make web services work faster.
Much of the world’s population now lives in urban centers close to oceans but far away from data centers usually built in out-of-the-way places with lots of room.
The ability to place computing power near users lowers the delay, or latency, people experience, which is a big issue for web users.
“For years, the main cloud providers have been seeking sites around the world not only for green energy but which also take advantage of the environment,” said Larry Smarr, a physicist and scientific computing specialist who is director of the California Institute for Telecommunications and Information Technology at the University of California, San Diego.
Driven by technologies as varied as digital entertainment and the rapid arrival of the so-called Internet of Things, the demand for centralized computing has been growing exponentially.
Microsoft manages more than 100 data centers around the globe and is adding more at a rapid clip. The company has spent more than $15 billion on a global data center system that now provides more than 200 online services.

The “Leona Philpot” prototype was deployed off the central coast of California on Aug. 10, 2015.
In 2014, engineers in a branch of Microsoft Research known as New Experiences and Technologies, or NExT, began thinking about a novel approach to sharply speed up the process of adding new power to so-called cloud computing systems.
“When you pull out your smartphone you think you’re using this miraculous little computer, but actually you’re using more than 100 computers out in this thing called the cloud,” said Peter Lee, corporate vice president for Microsoft Research and the NExT organization.
“And then you multiply that by billions of people, and that’s just a huge amount of computing work.”
The company recently completed a 105-day trial of a steel capsule — eight feet in diameter — that was placed 30 feet underwater in the Pacific Ocean off the Central California coast near San Luis Obispo.
Controlled from offices here on the Microsoft campus, the trial proved more successful than expected.
The researchers had worried about hardware failures and leaks.
The underwater system was outfitted with 100 different sensors to measure pressure, humidity, motion and other conditions to better understand what it is like to operate in an environment where it is impossible to send a repairman in the middle of the night.
The system held up.
That led the engineers to extend the time of the experiment and to even run commercial data-processing projects from Microsoft’s Azure cloud computing service.
The research group has started designing an underwater system that will be three times as large.
It will be built in collaboration with a yet-to-be-chosen developer of an ocean-based alternative-energy system.
The Microsoft engineers said they expected a new trial to begin next year, possibly near Florida or in Northern Europe, where there are extensive ocean energy projects underway.
The first prototype, affectionately named Leona Philpot — a character in Microsoft’s Halo video game series — has been returned, partly covered with barnacles, to the company’s corporate campus here.
It is a large white steel tube, covered with heat exchangers, with its ends sealed by metal plates and large bolts.
Inside is a single data center computing rack that was bathed in pressurized nitrogen to efficiently remove heat from computing chips while the system was tested on the ocean floor.
The idea for the underwater system came from a research paper written in 2014 by several Microsoft data center employees, including one with experience on a Navy submarine.
Norman A. Whitaker, the managing director for special projects at Microsoft Research and the former deputy director at the Pentagon’s Defense Advanced Research Projects Agency, or Darpa, said the underwater server concept was an example of what scientists at Darpa called “refactoring,” or completely rethinking the way something has traditionally been accomplished.
Even if putting a big computing tube underwater seems far-fetched, the project could lead to other innovations, he said.
For example, the new undersea capsules are designed to be left in place without maintenance for as long as five years.
That means the servers inside it have to be hardy enough to last that long without needing repairs.
That would be a stretch for most servers, but they will have to improve in order to operate in the underwater capsule — something the Microsoft engineers say they are working on. 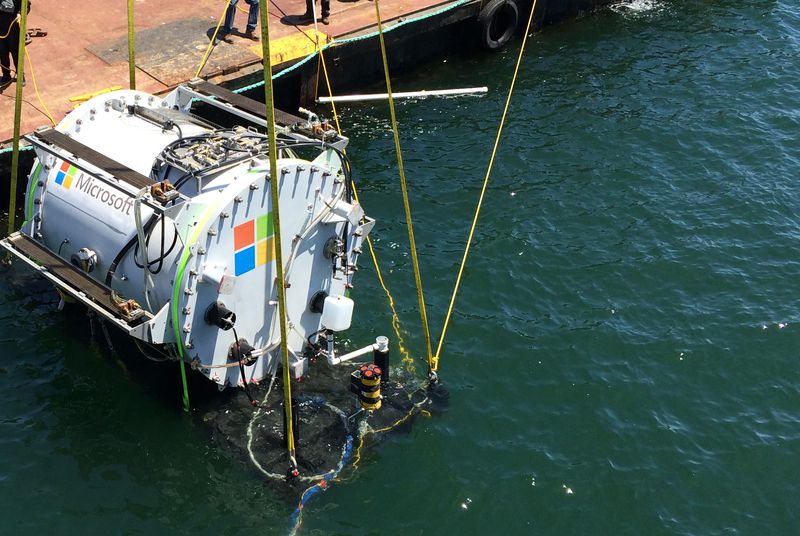 Project Natick vessel being deployed.
They’re also rethinking the physical alignment of data centers.
Right now, servers are put in racks so they can be maintained by humans.
But when they do not need maintenance, many parts that are just there to aid human interaction can be removed, Mr. Whitaker said.
“The idea with refactoring is that it tickles a whole bunch of things at the same time,” he said.
In the first experiment, the Microsoft researchers said they studied the impact their computing containers might have on fragile underwater environments.
They used acoustic sensors to determine if the spinning drives and fans inside the steel container could be heard in the surrounding water.
What they found is that the clicking of the shrimp that swam next to the system drowned out any noise created by the container.
One aspect of the project that has the most obvious potential is the harvest of electricity from the movement of seawater.
This could mean that no new energy is added to the ocean and, as a result, there is no overall heating, the researchers asserted.
In their early experiment the Microsoft engineers said they had measured an “extremely” small amount of local heating of the capsule.
“We measured no heating of the marine environment beyond a few inches from the vessel,” Dr. Lee said.