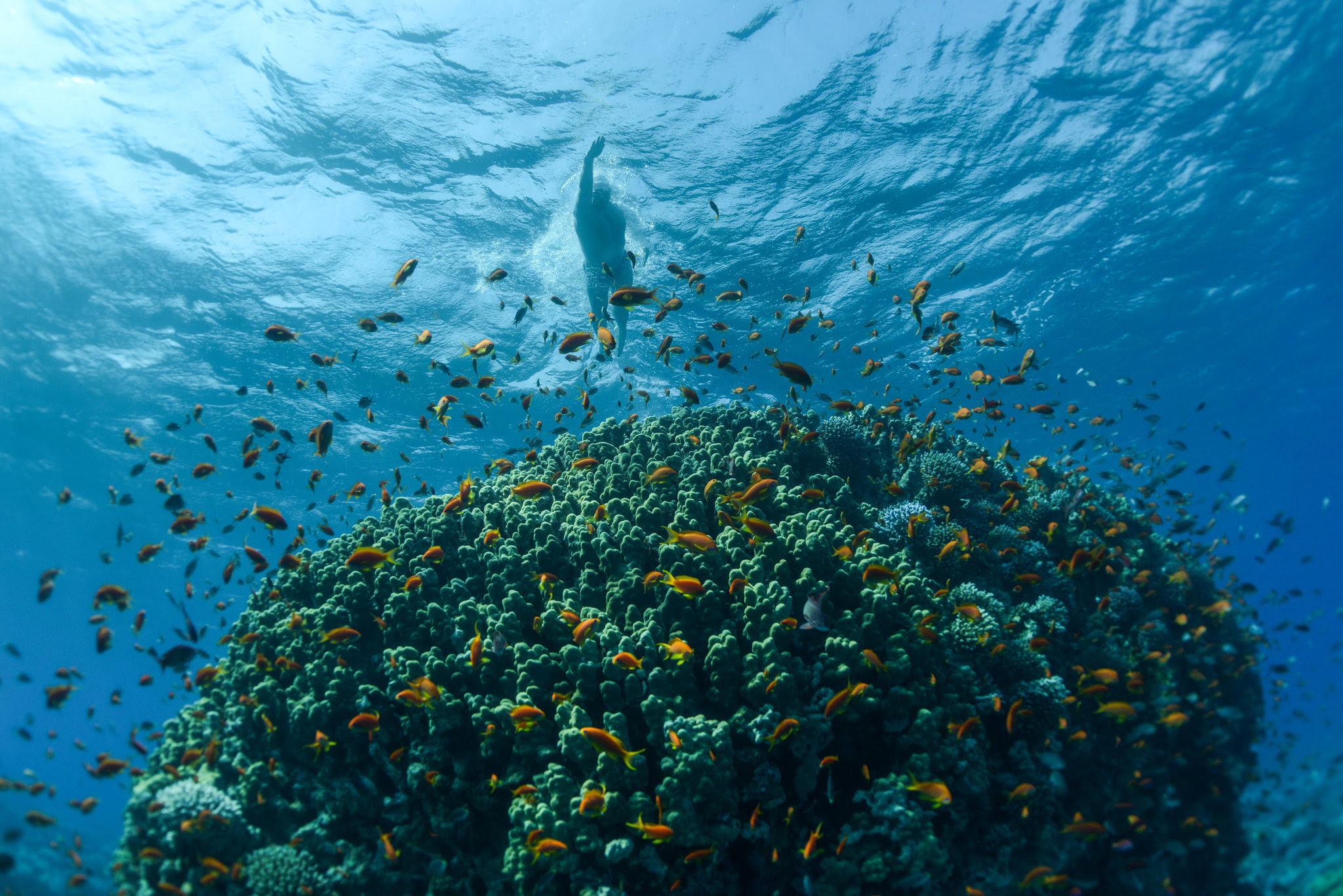 The author swimming over the Aqaba Marine Protected Area in the Red Sea.
photo : Kelvin Trautman

From NY Times by Lewis Pugh


You get a good feel for the health of the oceans when you stick your head in them for four weeks. This summer, I swam long distances in the Seven Seas: the Mediterranean, Adriatic, Aegean, Black, Red, Arabian and North Seas.
The longest swim was 37 miles and took me two days.
The swims were intended to draw attention to the health of the oceans.
But I seriously underestimated the urgency of the issue I was swimming for.
As the United Nations Patron of the Oceans, I have given many speeches stressing the need to protect our environment for the sake of our children and grandchildren.
I now realize it’s not about our children.
It’s about us.
And the situation is much worse than I thought.
I was shocked by what I saw in the seas, and by what I didn’t see.
I saw no sharks, no whales, no dolphins.
I saw no fish longer than 11 inches.
The larger ones had all been fished out.
When I swam in the Aegean, the sea floor was covered with litter; I saw tires and plastic bags, bottles, cans, shoes and clothing. 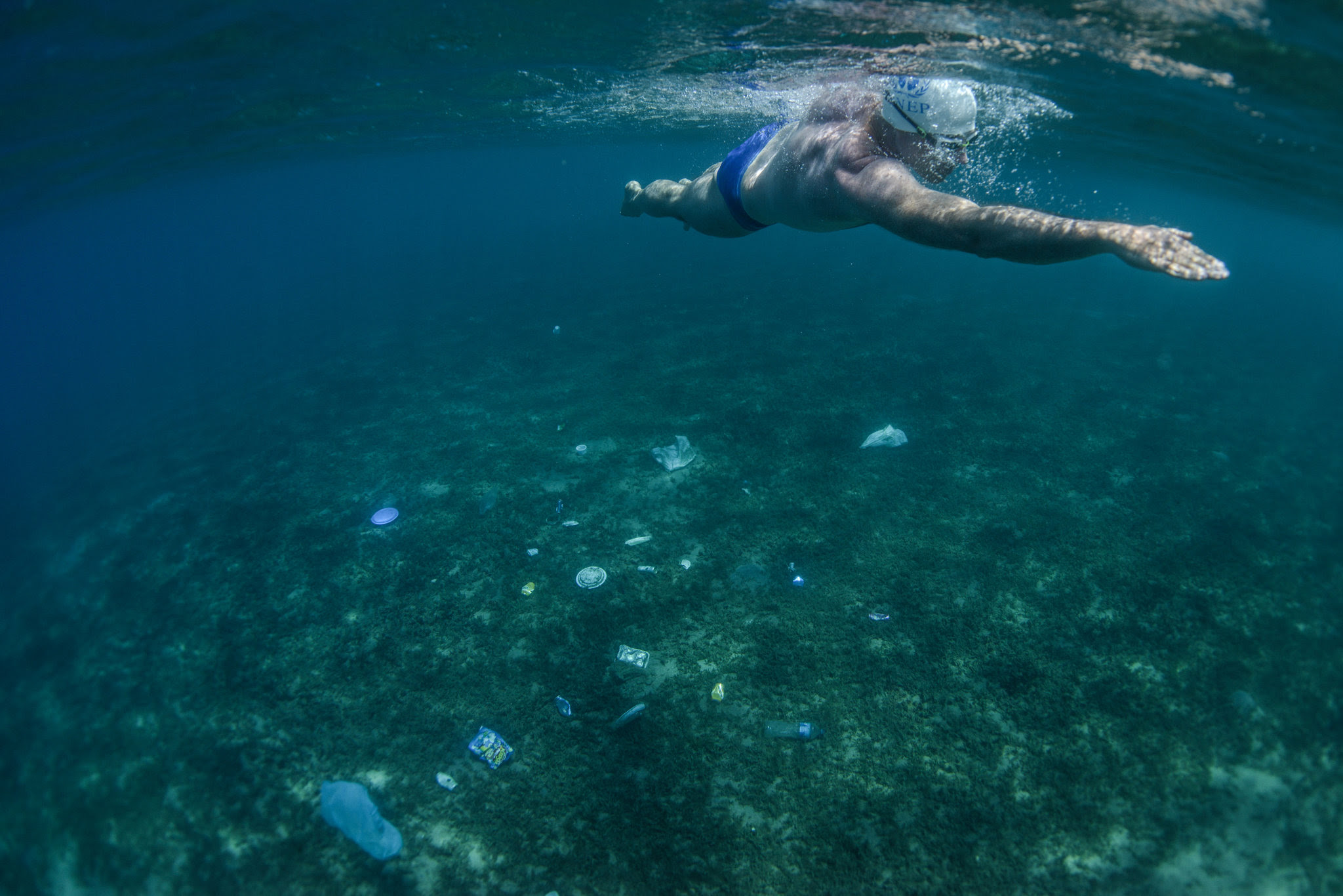 And a little more than a mile away, outside of the marine protected area.
Credit Kelvin Trautman

The Black Sea was full of Mnemiopsis, a rapidly reproducing species of jellyfish.
This species is not native; it was brought in with the ballast on visiting ships, and has wrought havoc on the ecosystem.
As I was about to jump into the Red Sea, I asked the boat’s skipper whether I should keep a lookout for sharks. He told me not to worry — they’re long gone.
Well, that’s exactly what does worry me.
An estimated 100 million sharks are fished out of the world’s oceans every year.
That’s like removing the lions from the Serengeti.
It wouldn’t be long before the gazelles, zebras and wildebeests had multiplied and eaten all the grass.
And when the land was laid bare the grazers would starve.
Predators are crucial for a healthy ecosystem, be it on land or in the water.

Lewis Pugh - Ordinary Won't Change the World
He was the first person to complete a long distance swim in every ocean of the world.
He was the first to undertake a swim across the icy waters of the North Pole and the first to swim across a glacial lake on Mt Everest.
In a career spanning 27 years the maritime lawyer has pioneered more swims around famous landmarks than any other swimmer in history.
I’m 44 years old.
I like to think I’m only halfway through my life.
That’s hardly a comforting thought, though, when I imagine the changes in the oceans in the first half of my life continuing into the second.
World population is expected to grow from seven billion to nine billion.
As developing countries become developed, they will demand more resources like fuel, fresh water and food.
Much of that food is expected to come from our oceans.
And they simply don’t have the capacity to provide it anymore.

A priest who traveled to the New World with Christopher Columbus described in his diaries the turtles they encountered.
“The sea was all thick with them,” he wrote, “so numerous that it seemed the ships would run aground on them.”
We have forgotten what our seas used to look like.
Many species are now on the brink of extinction, from the Mediterranean monk seal to the hawksbill turtle in the Arabian Sea.

Lewis Pugh talks about the methods he uses to undertake swims, which were deemed “impossible” – choosing the right team, meticulous preparation, the right mind-set, never quitting, and changing when circumstances dictate.
Most of all, he talks about having a driving purpose, which for him is to protect our oceans.

In 2005, I swam in the Southern Ocean, just off Antarctica. It was cold — very cold — when I swam over a graveyard of whale bones near an old whaling factory.
As far as I could see, there were bleached white bones piled up on the seafloor.
Man hunted whales almost to the point of extinction, not seeming to care that we could lose one of the wonders of the sea forever.
It is the coldness of the water that preserves the bones and makes it look as if they were left there yesterday, but I like to think they are there as a reminder of man’s potential for folly.


Fortunately, in 1986 most countries ceased commercial whaling, and some whale populations have made a spectacular recovery.
Whales like the Southern right were brought back from the brink of extinction.
Their numbers are now increasing 7 percent year after year. If we can do it with one species, surely we can do it for entire ecosystems.
We just need to give them the space to recover.
Marine protected areas, which are like national parks for the seas, are the best way to make that happen.
In the Red Sea, I saw no coral and no fish.
It looked like an underwater desert.
But then, a little more than a mile later, I swam into a protected area, where fishing had been restricted.
It was a sea as it was meant to be: rich and colorful and teeming with abundant life.

We need far more of these protected areas.
They allow the habitat to recover from overfishing and pollution, which helps fish stocks recover.
When we create them, we protect the coral, which protects the shoreline and provides shelter for fish.
They become places people want to visit for ecotourism.
They are good for the world economy, for the health of the oceans, for every person living on this planet.
This year in the Aegean I swam over tires and trash.
In a few years, I hope to return, and swim over thriving coral reefs.