Why are we importing our own fish?

Hundreds of shrimp trawlers setting off from the Shenjiamen fishing port in eastern China in 2010. Credit Hu Sheyou/Xinhua Press, via Corbis

From NYTimes by Paul Greenberg


In 1982 a Chinese aquaculture scientist named Fusui Zhang journeyed to Martha’s Vineyard in search of scallops.
The New England bay scallop had recently been domesticated, and Dr. Zhang thought the Vineyard-grown shellfish might do well in China. After a visit to Lagoon Pond in Tisbury, he boxed up 120 scallops and spirited them away to his lab in Qingdao.
During the journey 94 died.
But 26 thrived.
Thanks to them, today China now grows millions of dollars of New England bay scallops, a significant portion of which are exported back to the United States.

As go scallops, so goes the nation.
According to the National Marine Fisheries Service, even though the United States controls more ocean than any other country, 86 percent of the seafood we consume is imported.
But it’s much fishier than that: While a majority of the seafood Americans eat is foreign, a third of what Americans catch is sold to foreigners.

The seafood industry, it turns out, is a great example of the swaps, delete-and-replace maneuvers and other mechanisms that define so much of the outsourced American economy; you can find similar, seemingly inefficient phenomena in everything from textiles to technology.
The difference with seafood, though, is that we’re talking about the destruction and outsourcing of the very ecological infrastructure that underpins the health of our coasts.
Let’s walk through these illogical arrangements, course by course.

Appetizers: Half Shells for Cocktails

Our most blatant seafood swap has been the abandonment of local American oysters for imported Asian shrimp.
Once upon a time, most American Atlantic estuaries (including the estuary we now call the New York Bight) had vast reefs of wild oysters.
Many of these we destroyed by the 1800s through overharvesting.
But because oysters are so easy to cultivate (they live off wild microalgae that they filter from the water), a primitive form of oyster aquaculture arose up and down our Atlantic coast.

Until the 1920s the United States produced two billion pounds of oysters a year.
The power of the oyster industry, however, was no match for the urban sewage and industrial dumps of various chemical stews that pummeled the coast at midcentury.
Atlantic oyster culture fell to just 1 percent of its historical capacity by 1970.

Just as the half-shell appetizer was fading into obscurity, the shrimp cocktail rose to replace it, thanks to a Japanese scientist named Motosaku Fujinaga and the kuruma prawn.
Kurumas were favored in a preparation known as “dancing shrimp,” a dish that involved the consumption of a wiggling wild shrimp dipped in sake.
Dr. Fujinaga figured out how to domesticate this pricey animal.
His graduate students then fanned out across Asia and tamed other varieties of shrimp.

Today shrimp, mostly farmed in Asia, is the most consumed seafood in the United States: Americans eat nearly as much of it as the next two most popular seafoods (canned tuna and salmon) combined. Notably, the amount of shrimp we now eat is equivalent to our per capita oyster consumption a century ago.

And the Asian aquaculture juggernaut didn’t stop with shrimp.
In fact, shrimp was a doorway into another seafood swap, which leads to the next course.

Most seafood eaters know the sad story of the Atlantic cod.
The ill effects of the postwar buildup of industrialized American fishing are epitomized by that fish’s overexploitation: Gorton’s fish sticks and McDonald’s Filets-o-Fish all once rode on the backs of billions of cod.
The codfish populations of North America plummeted and have yet to return.

Just as the North Atlantic was falling as a fish-stick producer, the Pacific rose.
Beginning in the 1990s two new white fish started coming to us from Asia: tilapia, which grows incredibly fast, and the Vietnamese Pangasius catfish, which grows even faster (and can breathe air if its ponds grow too crowded).
These two are now America’s fourth- and sixth-most-consumed seafoods, respectively, according to the National Fisheries Institute.

Alongside them, a fishery arose for an indigenous wild American Pacific fish called the Alaskan, or walleye, pollock.
In just a few decades, pollock harvests went from negligible to billions of pounds a year.
Pollock is now the fish in McDonald’s Filet-o-Fish and the crab in the “fake crab” that Larry David discussed mid-coitus on “Curb Your Enthusiasm.”
In fact, there is so much pollock that we can’t seem to use it all: Every year more than 600 million pounds is frozen into giant blocks and sent to the churning fish processing plants of Asia, Germany and the Netherlands.

Sending all this wild fish abroad and then importing farmed fish to replace it is enough to make you want to take a stiff drink and go to bed.
But when you wake up and reach for your bagel, surprise!
The fish swap will get you again. 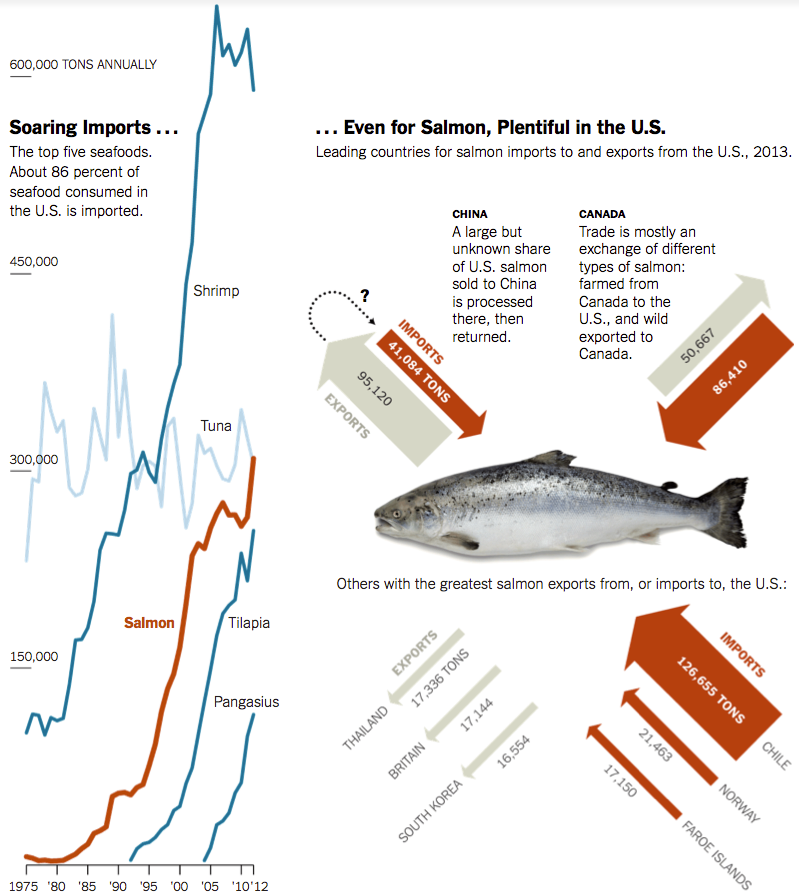 There was a time when “nova lox” was exactly that: wild Atlantic salmon (laks in Norwegian) caught off Nova Scotia or elsewhere in the North Atlantic.
But most wild Atlantic salmon populations have been fished to commercial extinction, and today a majority of our lox comes from selectively bred farmed salmon, with Chile our largest supplier.

This is curious, given that salmon are not native to the Southern Hemisphere.
But after Norwegian aquaculture companies took them there in the ’80s, they became so numerous as to be considered an invasive species.

The prevalence of imported farmed salmon on our bagels is doubly curious because the United States possesses all the wild salmon it could possibly need.
Five species of Pacific salmon return to Alaskan rivers every year, generating several hundred million pounds of fish flesh every year.

Where does it all go?
Again, abroad.
Increasingly to Asia.
Alaska, by far our biggest fish-producing state, exports around three-quarters of its salmon.

To make things triply strange, a portion of that salmon, after heading across the Pacific, returns to us: Because foreign labor is so cheap, many Alaskan salmon are caught in American waters, frozen, defrosted in Asia, filleted and boned, refrozen and sent back to us.
Pollock also make this Asian round trip, as do squid — and who knows what else?

When you dig into the fish-trade data, things get murkier.
In its 2012 summary of the international fish trade, the National Oceanic and Atmospheric Administration noted, somewhat bizarrely, that its definition of exports “may include merchandise of both domestic and foreign origin.”
So, for example, when fish sticks are cut from blocks of imported “white fish” in an American facility and exported to a foreign country, they are classified as American domestic production.
Meanwhile some of our imports, as with an unknowable portion of our salmon, are taken from American waters, reprocessed elsewhere and brought back home.
Do these percentages cancel themselves out?
We don’t know. 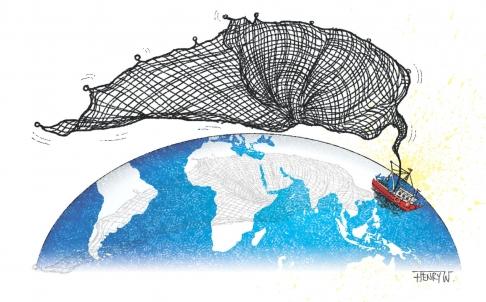 But when trade so completely severs us from our coastal ecosystems, what motivation have we to preserve them?
I’d argue that with so much farmed salmon coming into the country, we turn a blind eye to projects like the proposed Pebble Mine in Alaska, which would process 10 billion tons of ore from a site next to the spawning grounds of the largest wild sockeye salmon run on earth.

I’d maintain that farmed shrimp inure us to the fact that the principal rearing ground of Gulf shrimp, the Mississippi River Delta, is slipping into the sea at a rate of a football field an hour.
I’d venture that if we didn’t import so much farmed seafood we might develop a viable, sustainable aquaculture sector of our own.
Currently the United States languishes in 15th place in aquaculture, behind microscopic economies like Egypt and Myanmar.
And I’d suggest that all this fish swapping contributes to an often fraudulent seafood marketplace, where nearly half of the oceanic products sold may be mislabeled.

We can have no more intimate relationship with our environment than to eat from it.
During the last century that intimacy has been lost, and with it our pathway to one of the most healthful American foods.
It is our obligation to reclaim this intimacy.
This requires us not just to eat local seafood; it requires the establishment of a working relationship with our marine environment.
It means, in short, making seafood not only central to personal health, but critical to the larger health of the nation.
Posted by geogarage at 1:00 AM