Dumping iron in the seas can help transfer carbon from the atmosphere and bury it on the ocean floor for centuries, helping to fight climate change, according to a study released last week
.
The report, by an international team of experts, provided a boost for the disputed use of such ocean fertilisation for combating global warming.
But it failed to answer questions over possible damage to marine life.

When dumped into the ocean, the iron can spur growth of tiny plants that carry heat-trapping carbon to the ocean floor when they die, the study said.
Scientists dumped seven tonnes of iron sulphate, a vital nutrient for marine plants, into the Southern Ocean in 2004.
At least half of the heat-trapping carbon in the resulting bloom of diatoms, a type of algae, sank below 1,000 metres (3,300 ft).
"Iron-fertilised diatom blooms may sequester carbon for timescales of centuries in ocean bottom water and for longer in the sediments," the team from more than a dozen nations wrote in the journal Nature. 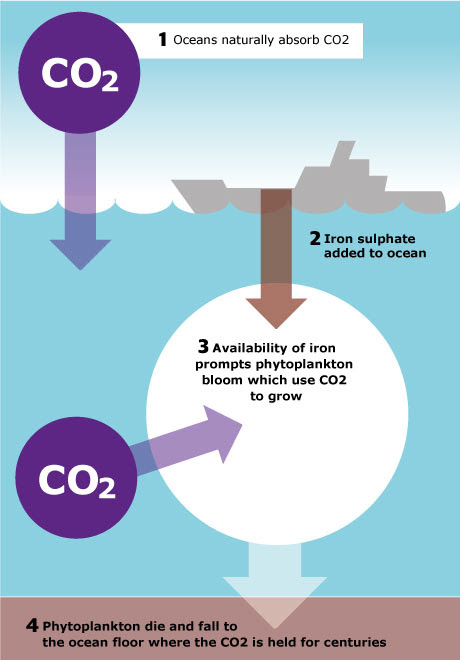 Burying carbon in the oceans would help the fight against climate change, caused by a build-up of carbon dioxide in the atmosphere that scientists say is raising temperatures and causing more floods, mudslides, droughts and higher sea levels.
The study was the first convincing evidence that carbon, absorbed by algae, can sink to the ocean bed. One doubt about ocean fertilisation has been whether the carbon stays in the upper ocean layers, where it can mix back into the air.
A dozen previous studies have shown that iron dust can help provoke blooms of algae but were inconclusive about whether it sank.
Large-scale experiments with ocean fertilisation using iron are currently banned by the international London Convention on dumping at sea because of fears about side-effects. 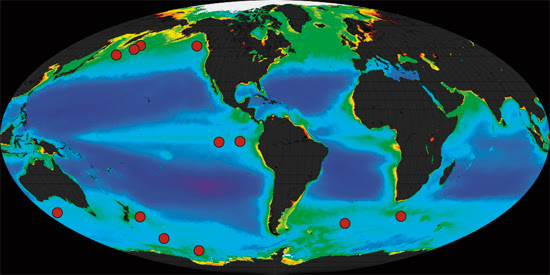 "I am hoping that these results will show how useful these experiments are," lead author Victor Smetacek of the Alfred Wegener Institute in Germany told Reuters.
"It's a crying shame, honestly," he said of the moratorium, which he said meant that even small-scale experiments were too complex and costly for researchers.
He said that ocean fertilisation should be overseen by the United Nations and should not be eligible for carbon credits under U.N. treaties.
He said private companies should not be allowed to run experiments so that proper oversight can be ensured.
Ocean fertilisation is one of several suggested techniques for slowing climate change known as "geo-engineering".

Other possibilities include reflecting sunlight with giant mirrors in space.
"Most scientists would agree that we are nowhere near the point of recommending ocean iron fertilisation as a geo-engineering tool," Ken Buessler of the Woods Hole Oceanographic Institution in the United States wrote in a commentary in Nature.
But he added that many thought that bigger and longer experiments were needed to see if the technology worked.

"If the 50 percent figure for algal bloom biomass sinking to the deep ocean is correct then this represents a whole new ball game in terms of iron fertilisation as a geo-engineering technique," said Dave Reay, a senior lecturer in carbon management at the University of Edinburgh who was not involved in the study.
"Maybe such deliberate enhancement of carbon storage in the oceans has more legs than we thought but, as the authors acknowledge, it's still far too early to run with it," he said.

Smetacek said the publication had been delayed since 2004 partly because of problems in checking that the 150 square km (60 square miles) patch of ocean where the iron was dumped - an eddy in the Antarctic Circumpolar Current - had not mixed with waters outside.
The experts said that the input of iron was similar to that found after the melt of icebergs in the oceans - iron concentrations in coastal regions tend to be much higher.