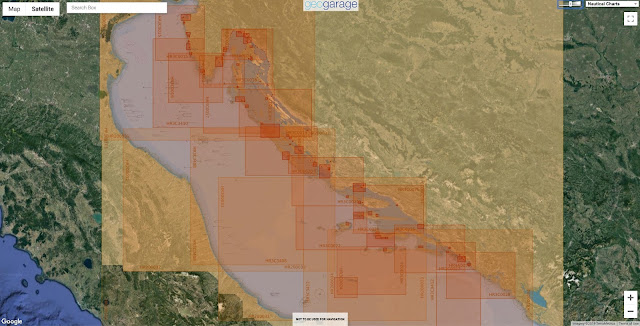 
On May 22., 2019. for the official use of 25 new cells of electronic navigation Cards (ENC).
Thus, the Croatian Hydrographic Institute (HHI) enabled availability and use of a total of 207 cells of enc all upotrebnih groups, which announces with special pleasure and pride.

The first package of enc's hhi was issued 12 years ago (February 2007.), and for priority areas intended for sailing very fast boats (High Speed Craft).
He continued to release new packages according to established priorities, leading the criteria to ensure the coverage of the most important areas of the solas ships in the international
After the complete coverage of the plovidbenih area of solas ships, hhi continues to create and publish new enc for areas of smaller ports and sailing smaller boats (Non-Solas) and yachts.

By establishing production and distribution of official enc, hhi has greatly contributed to the improvement of the hydrographic-navigation element of safety, which has been fulfilled and internationally downloaded the obligation of ensuring the availability of enc on ships to a certain deadline, and for the area of the

Information about all the published cells of enc is available to users in the print edition of the catalogue of maritime cards and publications, as well as on the website of hhi -

25 New Electronic Navigation Charts (ENC) Released On July 17, 2019, 25 new electronic navigation charts (ENCs) were issued for official use.
This enabled the Croatian Hydrographic Institute (HHI) to make available and use a total of 232 ENC cells of all use groups.
Official electronic charts can be obtained through the regional coordinating center PRIMAR and its network of authorized distributors.
Information on all published ENC cells is available in the printed edition of the Catalog of Maritime Maps and Publications as well as on the HHI website
Posted by geogarage at 4:01 PM