From The Guardian by Oliver Millman

More than five trillion pieces of plastic, collectively weighing nearly 269,000 tonnes, are floating in the world’s oceans, causing damage throughout the food chain, new research has found.
Data collected by scientists from the US, France, Chile, Australia and New Zealand suggests a minimum of 5.25tn plastic particles in the oceans, most of them “micro plastics” measuring less than 5mm.
The volume of plastic pieces, largely deriving from products such as food and drink packaging and clothing, was calculated from data taken from 24 expeditions over a six-year period to 2013.
The research, published in the journal PLOS One, is the first study to look at plastics of all sizes in the world’s oceans.


Inside the Garbage of the World Documentary :
Is the Plastic Trash Island floating in the Pacific Ocean a myth?
Are we getting poisoned?
How long do we have before a worldwide disaster happen?
This Documentary includes interview from Capt. Moore (Algalita Marine Research Institute), Anna Cummins (5 gyres Institute), Dr Andrea Neal (Jean-Michel Cousteau), Surfrider Foundation and a variety of Scientist and Doctors who have been researching how bad the situation is.
It will give you a real idea of how much damage we are creating and how fast we have to stop in order to survive the future.

Large pieces of plastic can strangle animals such as seals, while smaller pieces are ingested by fish and then fed up the food chain, all the way to humans.
This is problematic due to the chemicals contained within plastics, as well as the pollutants that plastic attract once they are in the marine environment.
“We saw turtles that ate plastic bags and fish that ingested fishing lines,” said Julia Reisser, a researcher based at the University of Western Australia.
“But there are also chemical impacts. When plastic gets into the water it acts like a magnet for oily pollutants.
“Bigger fish eat the little fish and then they end up on our plates. It’s hard to tell how much pollution is being ingested but certainly plastics are providing some of it.”


The researchers collected small plastic fragments in nets, while larger pieces were observed from boats.
The northern and southern sections of the Pacific and Atlantic oceans were surveyed, as well as the Indian ocean, the coast of Australia and the Bay of Bengal.
The vast amount of plastic, weighing 268,940 tonnes, includes everything from plastic bags to fishing gear debris.
While spread out around the globe, much of this rubbish accumulates in five large ocean gyres, which are circular currents that churn up plastics in a set area.
Each of the major oceans have plastic-filled gyres, including the well-known ‘great Pacific garbage patch’ that covers an area roughly equivalent to Texas.
Reisser said traversing the large rubbish-strewn gyres in a boat was like sailing through “plastic soup.”
“You put a net through it for half an hour and there’s more plastic than marine life there,” she said. “It’s hard to visualise the sheer amount, but the weight of it is more than the entire biomass of humans. It’s quite an alarming problem that’s likely to get worse.”

The research found that the gyres themselves are likely to contribute to the problem, acting as “shredders” to the plastic before dispersing it.
“Our findings show that the garbage patches in the middle of the five subtropical gyres are not the final resting places for the world’s floating plastic trash,” said Marcus Eriksen, another of the report’s co-authors.
“The endgame for micro-plastic is interactions with entire ocean ecosystems.” 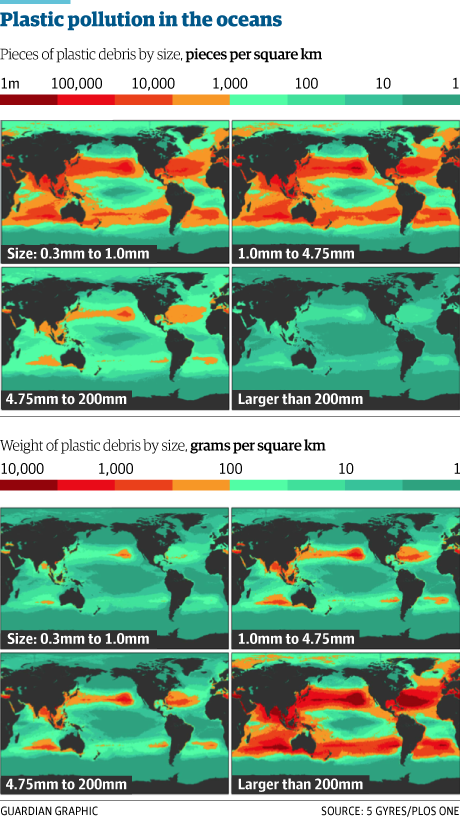 The research, the first of its kind to pull together data on floating plastic from around the world, will be used to chart future trends in the amount of debris in the oceans.
But researchers predict the volume will increase due to rising production of throwaway plastic, with only 5% of the world’s plastic currently recycled.
“Lots of things are used once and then not recycled,” Reisser said.
“We need to improve our use of plastic and also monitor plastics in the oceans so we get a better understanding of the issue.

“I’m optimistic but we need to get policy makers to understand the problem. Some are doing that – Germany has changed the policy so that manufacturers are responsible for the waste they produce. If we put more responsibility on to the producer then that would be part of the solution.”