Dozens of boats herded a group of pilot whales into a bay for slaughter in the Faroe Islands on Tuesday as local residents took part in a traditional 'Grindadrap' whale hunt.

Inhabitants of the Faroe Islands round up pilot whales (Globicephala melaena) during the traditional 'Grindadrap' ('whale hunting' in Faroese) near the capital Torshavn on November 22.
Andrija Ilic / Reuters

The meat and blubber of pilot whales have long been a part of the islanders' national diet, according to Reuters, which reports that the whaling is not done for commercial purposes.
Nevertheless, the Whale and Dolphin Conservation Society, a pressure group, says that the techniques used to kill the whales are "intensely stressful and cruel."
In a statement posted on a government-run website, the Faroe Islands' Ministry of Foreign Affairs said that they were committed to "internationally adopted principles for the conservation and sustainable use of living marine resources."

Viking tradition: the blood of slaughtered pilot whales turns the sea red near Torshavn
on November 22.

There were 5 whale drives between January and September this year, with a total catch of 406 pilot whales, according to the Faroese government statement. 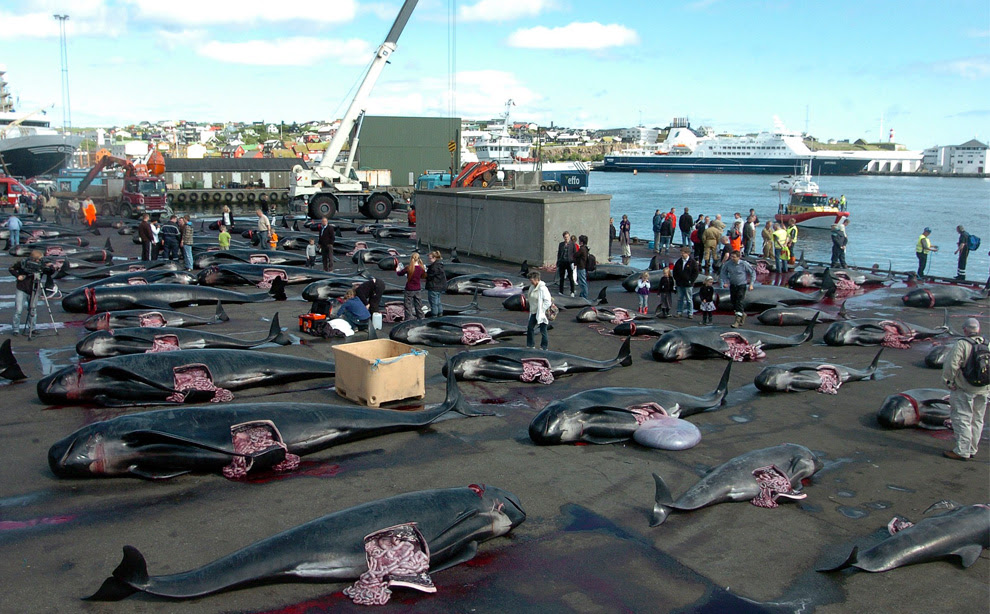 More than 120 pilot whales, slaughtered on July 23, 2010, are pictured on docks in the harbor of Torshavn, Faroe Islands, an autonomous province of Denmark.
Every year, herds of pilot whales (Globicephala melaena) pass by the shores of the Faroe Islands.
In the past fishermen used spears and harpoons, but today the whale hunting equipment is legally restricted to special knives, ropes, and assessing-poles for measurement.
(REUTERS/Andrija Ilic)

The American Cetacean Society says that pilot whales are not considered to be endangered, but that there has been a noticeable decrease in their numbers around the Faroe Islands.
Posted by Peio at 1:10 AM