I have often said that global warming is really ocean warming.
As humans add more heat-trapping gases to the atmosphere, it causes the Earth to gain energy. Almost all of that energy ends up in the oceans.
So, if you want to know how fast the Earth is warming, you have to measure how fast the oceans are heating up.

Sounds easy enough at first, but when we recognize that the oceans are vast (and deep) we can appreciate the difficulties.
How can we get enough measurements, at enough locations, and enough depths, to measure the oceans’ temperatures?
Not only that, but since climate change is a long-term trend, it means we have to measure ocean temperature changes over many years and decades.
We really want to know how fast the oceans’ temperatures are changing over long durations.

But that isn’t all.
Throughout the years, we have made changes to the measurement methods.
From old canvas buckets that were dipped into waters which were then measured, to insulated buckets, to temperature probes on the hulls of ships, devices that would be dropped into deep ocean waters, and now the ARGO fleet, which is approximately 3,000 autonomous devices that are more-or-less equally distributed across the oceans.
Each of these devices measures temperatures a little differently; they have biases.
As you change from one set of instruments to another, you might see a cooling or warming effect related to the change in instruments, not because the water temperatures are changing.
The seeming intractability of this problem is why I began studying it a few years ago.
I have worked with colleagues to answer a very specific equation related to one of the most commonly employed ocean measurement devices, the eXpendable BathyThermograph (or XBT for short).
For many years, these devices formed the backbone of ocean temperature measurements.
My colleagues and I want to ensure measurements from XBTs are as accurate as possible.

UCI Marine Scientist Jim Nickels takes a second to show us some "Old School Science" equipment, -a Bathythermograph, and explain it's purpose.

These devices are used by navies to measure the depth of the thermocline.
While that was their original mission, climate scientists have adopted the devices for determining long-term ocean temperature changes.
The problem is that the devices are relatively simple; they are freely dropped into ocean waters.
As they descend, like a spinning torpedo, they unwind a wire connected to a computer system on-board the ship.
A sensor in the probe sends temperature information to the computer system and a recording is made.
When the device expends its wire, the wire breaks and the device continues to fall until it impacts the ocean floor.

It’s important for scientists to know the depth of each temperature measurement that the probe makes. The problem is, the probe does not detect its depth.
Rather, its depth is estimated by knowing how fast the probe falls in water.
The probe weight is balanced by drag forced between the water and the device.
If the knowledge of probe speed is not known accurately, it means a scientist may think the probe is at one depth when in fact, it’s at a different depth.
This subtle uncertainty can lead to large uncertainties in the overall ocean heat content.

Extensive experiments have shown that our expectations of probe speed is suitable in areas where the ocean water is warm.
But, what about Arctic regions?
There, where water is cold, the water has a higher viscosity (and consequently drag force).
We wanted to know whether we could correct that archive of ocean temperature measurements to account for measurements made in cold waters.
To solve this problem, I teamed up with world-class scientists Dr. Lijing Cheng and Rebecca Cowley.
Lijing Cheng is a rapidly rising international scientist from the Chinese Academy of Sciences.
He is currently producing some of the best research on the Earth’s energy imbalance.
Rebecca Cowley is a data expert from CSIRO in Australia.
Her group is recognized as among the best in ocean heat content measurements and data quality. 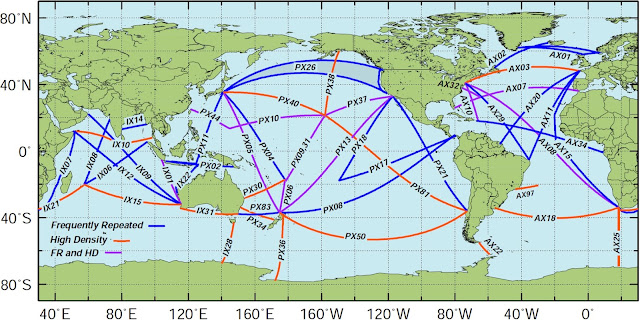 Map of XBT lines
An eXpendable BathyThermograph (XBT) is a temperature probe that is dropped into the ocean from a ship, either by hand or using using an automatic launching system.
Temperatures are recorded as the probe drops at a known rate through about the upper kilometer of the ocean.
By making measurements at the same location at regular intervals, it is possible to observe the evolution of the thermal structure of the upper ocean.
NOAA employs two sampling modes for deployment of XBT probes, each serving a different scientific purpose: Frequently Repeated (FR) and High Density (HD).
courtesy of NOAA

The article was just published by the American Society of Meteorology and can be found here.
Our data shows that as you move from warm waters to cold waters, probe descent speed changes by approximately 2%.
We provided a simple way that oceanographers could account for this effect in their data, and we then compared our proposed correction to high-quality temperature data obtained from side-by-side temperature experiments with two different instruments.
We showed that our method reduces temperature error and increases our understanding of ocean warming.
I asked Rebecca Cowley for her perspective on this study and she said,


We can see the effects of climate change in our oceans. To do this, we measure changes in temperature in our oceans over decadal time scales. Measuring the temperature of ocean water is not a new thing, it has been done for hundreds of years, and over time, measurement techniques have changed. In modern times, the XBT has been used extensively to measure ocean temperature and is only one of many methods. XBT data is special because it comprises ~50% of historical data between 1967 and 2001, a huge resource for oceanographers and for estimates of decadal changes in ocean temperature.
Small biases in the historical XBT data have been identified and various bias corrections have been developed which greatly improve the XBT data for climate change estimates. This work focusses on a purely physical method to estimate a fall rate for the XBT, which is unusual in the field of bias correction estimates. By looking at the physical shape of the XBT probe the fall rate is modelled. Other bias correction studies have looked at comparisons between XBTs and other instruments.
When we apply fall rate bias corrections, we improve the historical XBT dataset (a massive resource), reduce the bias errors and give estimates of ocean warming that are more comparable to the results we see with other instrumentation. In turn, the XBT data becomes very useful as it fills the gaps in time where we have very few other instruments collecting ocean temperature data. The XBT data also becomes useful for global ocean models – the data is included in the models and it improves their accuracy. Improving the accuracy of our ocean models leads to better forward estimates of future climate change impacts.

Sometimes science isn’t sexy.
Sometimes, you spend hours, days, and weeks to create small improvements in data.
But at the end of the day, these small improvements add up.
Being able to say we made things better is one of the reasons we got into science in the first place.
Posted by geogarage at 1:53 AM