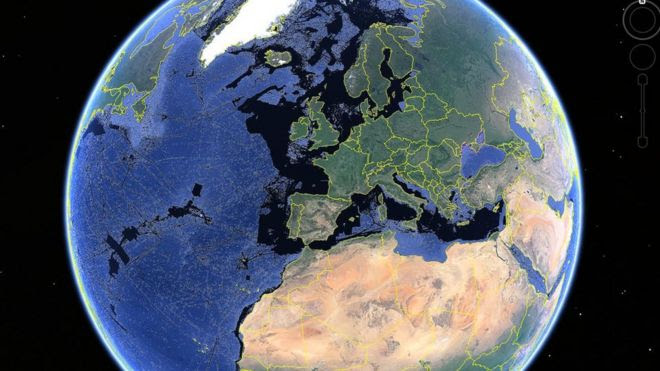 The blue areas have not been mapped with the most modern, high resolution technologies
World Hydrography Day is celebrated on June 21 every year with the aim of giving suitable publicity to the work of hydrographers at all levels and of increasing the coverage of hydrographic information on a global basis.

From BBC by Roland Pease


Ocean experts have called for international action to generate the kinds of maps of global seabeds that space missions have already returned for the Moon and Mars.
The call to "map the gaps" comes from GEBCO, the General Bathymetric Chart of the Ocean, a body first set up in 1903 to compile maps from naval surveys around the world.
But more than a century on from the first international charts, vast expanses of the ocean are still represented by just a single point where an ancient mariner threw a lead-weighted rope over the ship side.
Only 5% of the seafloor has been mapped by modern methods. Even around the UK, a nation with a long maritime history, almost a third of the coast is unsurveyed.
The entire Moon, in contrast, is known to a resolution of 7m, thanks to satellite mapping.
"It's a matter of commitment," complains Larry Mayer, director of the Center for Marine Science and Coastal Engineering at the University of New Hampshire, a world-leading centre of oceanographic expertise.
"We could map the entire deep oceans for $3bn - no more than a single Mars mission." 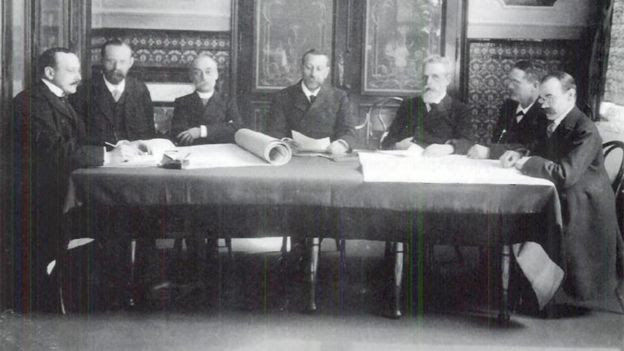 The founding meeting of GEBCO, from 1903, led by HSH Prince Albert I of Monaco

As another participant quipped, the community is "stuck between ability and utility."
Existing maps are principally produced to support shipping - to find safe routes for maritime traffic from supertankers and trawlers to leisure craft.
Detailed measurements of the ocean bottom are possible, but who would pay for it.
David Heydon, who founded the submarine mining company Nautilus Minerals and directs another exploration outfit, DeepGreen Resources, argues: "The land we live on is one-third of the planet - it's rare.
The other two-thirds are more than 3,000m under the water. It'd be crazy not to understand it."
The question is how it would be used.
"How can you build offshore windfarms, lay submarine cables, forecast storm surges, if you don't know the shape and depth of your coastal regions," asks Robert Ward, president of the International Hydrographic Organization, who is enthusiastic about a big scale-up of current efforts.
The problem comes down to time and cost.
If London were underwater, it would take weeks to map using conventional echo-sounding methods, Ward explains; and several days even using the most modern multibeam methods. 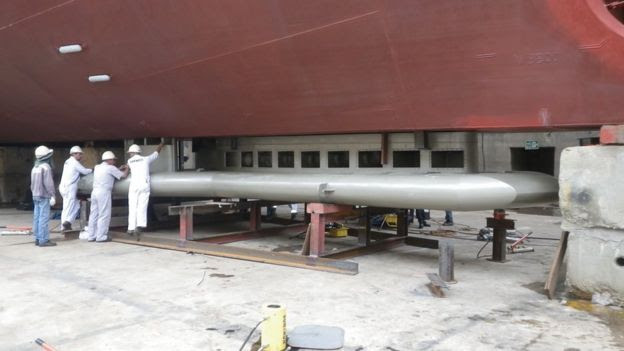 The type of multibeam echosounder used in the MH370 search

Today's survey vessels cost tens of thousands of dollars a day to run.
Others point out that London would simply vanish as too small to notice on many of the maps that currently exist.
Our ignorance of the seafloor came into sharp relief with the loss of the Malaysian airliner MH370.
"It went down in an area where we knew almost nothing," explains Rochelle Wigley, an oceanographer also based at the University of New Hampshire.
"There was just one modern survey line across an area the size of New Zealand."
Her colleague Larry Mayer agrees: "Much of the effort that's gone into finding [MH370] has been essentially making a base map."
The area has turned out to be filled with ridges and canyons spanning depths down to 7,000m, which has greatly hampered the search.
"If we'd had that base map, it would have saved months and months of time," the researcher asserts. 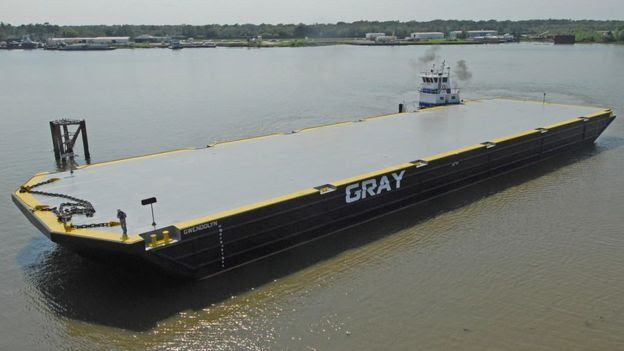 One solution could be the autonomous barge

The question that has dogged the debate at this week's forum is how much detail is needed.
More detail means more time and more cost.
For many just a single measurement every hundred metres would be a vast improvement on what's available today, even though it would fall far short of the quality of astronomers' lunar maps.
But anything worth investigating further could be followed up later with dedicated missions.
Others argue that the aim should be to beat the Moon maps, if the effort is to be attempted.
Swarms of undersea robots scanning the seafloor would be needed.
A tie up with the Xprize Shell Ocean Discovery Challenge seems a possibility. 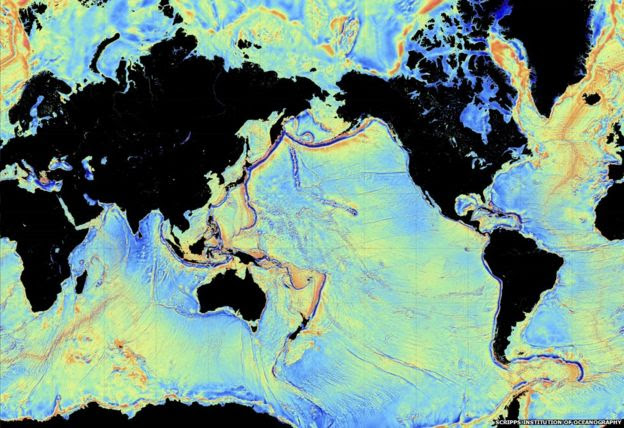 Satellite gravity data can do a job - but it cannot see underwater mountains less than 1.5km in height

Larry Mayer has a half-way proposition - a vast uncrewed barge laden with equipment that could roam the high seas autonomously for just a third of the cost of conventional missions, and never need to come into port.
With the biggest sonar array ever built, and controlled remotely, it could focus in where necessary, and sweep up large areas of abyssal plains at top speed.
"It would also be available if something like an MH370 happened again," he promises, "to sail into a region where you need a high-resolution search."
Such a self-steering vessel really would resemble a Nasa space mission mapping an unexplored world.
What GEBCO lacks is a Nasa-style infrastructure and budget to make it happen.
Anybody got a spare billion?