The colossal freighter, guided by a pair of tug boats that looked like gnats in comparison, eased toward the entrance of the Panama Canal, the storied passageway traversed more than a million times since its debut more than a century ago.

In collaboration with the Panama Canal Authority (ACP), the British Admiralty published in June 2016 5 new charts (ENCs band 5 berthing) of the entire Panama Canal at improved scales of 1:10,000-1:30,000, providing more detail and additional space to plot your position during transit of the canal.

This time, however, expectation hovered in the steamy air.
Hundreds of workers in hard hats and multi-colored safety vests gathered to watch as the MN Baroque glided toward a new set of locks.
“This is a major advance not just for Panama, but for the world,” said Xionara Martinez, 43, a cement worker and mother of two who was among the spectators applauding and taking photos with their cellphones.

The Panama Canal's chartered vessel transited the new Agua Clara Locks in the Atlantic side on June 9.
These transits, performed by the Neopanamax dry bulk carrier MN Baroque, are part of a series of a long-planned training events occurring in the run-up to the Expanded Canal's June 26 Inauguration.
(other video)

Gigantic carriers such as the MN Baroque — more than 50 yards wide and three football fields in length — have never fit through the Model T-era passage, constructed well before the emergence of super-sized cargo ships.
But that is about to change.


The simulation exercises in the new set of locks of Panama Canal were carried out between September 11th 2015 and April 14th 2016 at FHM the “Fundação Homem de Mar” Manoeuvring Simulator Class A in Rio de Janeiro.
The study aimed at analysing, using mathematical models, the safe manoeuvrability of a Neo-Panamax vessel, fully loaded, on day light, passing the new locks and assisted by tugboats of similar characteristics than those operating at the time the study was implemented.
Different environmental conditions historically recorded in the area, including current and wind, were used in the simulation exercises.

The test of the new locks this month offered a glimpse into the canal’s future, which begins this Sunday with the inauguration of a deeper, wider Panama Canal that can handle twice as much cargo.
The $5.4-billion project, nine years in the making, is aimed at boosting the competitiveness of the 50-mile short-cut between the Atlantic and the Pacific and maintaining its ability to generate billions of dollars a year for the central American nation.
“We knew for a long time we had to think about expanding, otherwise we would lose relevancy in the world,” said Ilya R. Espino de Marotta, who oversees the project for the Panama Canal Authority, an autonomous agency of the government of Panama.
“We were being maxed out.” 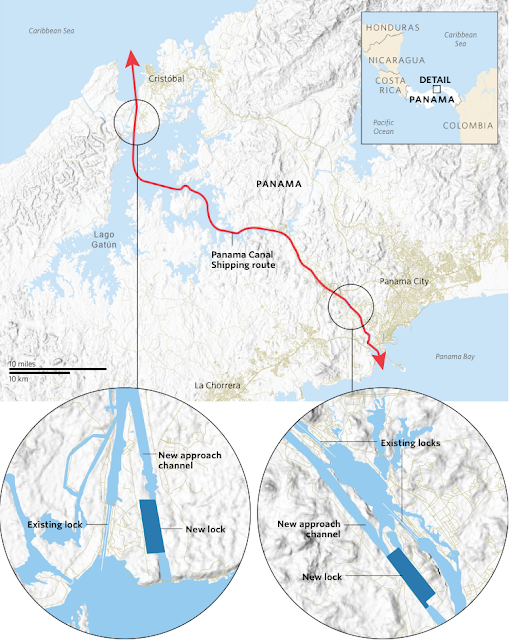 The upgrades have implications far beyond Panama.
It could reshape world trade routes, opening new markets for commodities from South America, pushing back against competition from the Suez Canal and shifting how goods enter the United States.

At stake is how imports will reach a vast swath of the American heartland, running from Chicago and south along the Mississippi River, stretching as far west as Dallas.
Because bigger ships will now fit through the canal, some analysts predict that more ships will dock on the East and Gulf coasts, diverting business from the nation’s two busiest ports — Los Angeles and Long Beach.
“People have been scratching their heads and sharpening their pencils ever since the Panamanians announced they would construct a new canal,” said Jock O’Connell, an international trade advisor at Beacon Economics, a Los Angeles research firm.
“After all this time we still don’t have a definitive sense of what will happen.”


Distance, proportions and comparisons:
Get to know in detail the components of one of the most important construction projects in Panama!
Take a look inside the Panama Canal Expansion.

One of the world’s greatest public works projects, the original canal, built by the United States and completed in 1914,  was a feat of engineering and perseverance that cost the lives of thousands of workers, many from malaria or yellow fever during an earlier, failed effort by the French.
The overhaul is its own epic story.
Workers blasted a new four-mile access channel on the Pacific side and conducted massive dredge operations to expand the existing routes.

The 16 new sluice gates — the doors of the new locks that raise and lower ships in and out of the canal — were made in Italy and arrived stacked on barges that together looked like a post-modern Stonehenge on the sea.
The gates, each weighing thousands of tons and soaring more than 100 feet in the air, were then installed into grooves with the help of remote-controlled vehicles resembling giant skateboards.
“Getting the gates fabricated and brought here was an extremely delicate part of the whole process,” said Giuseppe Quarta, the lead engineer with Salini Impregilo, the Italian firm that is part of the consortium that designed and constructed the locks.

The improvements essentially add a “third lane” to the waterway and are expected to dramatically reduce traffic jams, the long lines of idling ships that appear as dots on the horizon from the skyscrapers of Panama City.
More importantly, the canal can now accept the massive, so-called neo-Panamax ships.
In the highly competitive nautical  shipping world, bigger has come to mean cheaper, with reduced labor and fuel costs.
The waterway will accept titanic cargo ships, with containers stacked almost 15 stories high, or massive tankers filled with grain, liquefied natural gas or other cargo.
The maximum load is nearly three times as big as it used to be.

To commemorate the opening of the Panama Canal Expansion, EarthCam released this 4K construction time-lapse movie, showcasing progress from March 2011 to June 2016. Progress was documented for this historic transportation channel by EarthCam’s robotic time-lapse construction cameras from 142 webcam angles. Watch over 5 years of progress in just 2 minutes with HD photos and panoramic imagery.

The change could have a dramatic effect on world shipping — and in particular on how goods arrive in the world’s most prosperous market.
Currently 37% of all shipments to the United States arrive at the ports of Los Angeles or Long Beach, primarily from East Asia, across the Pacific.
Many of those goods are sent to the vast middle of the country on trains and trucks.

The Southern California ports have seen their market share decline slightly over the last decade as more consumer items from Asia are being sent the other way around the world through the Suez Canal to ports on the East Coast.
The expansion of the Panama Canal offers another way to get massive ships to those ports.
That has important implications not only for the Suez Canal but also for the ports of Los Angeles and Long Beach.

To send goods to the Midwest from Asia, it is generally cheaper to use the canal route to the East Coast and the Gulf states, because the cargo travels fewer miles on costly rail and truck routes.
Ports on the East Coast and the Gulf of Mexico — including New York, Miami and Houston — have been frantically gearing up for a bonanza.
They have deepened their harbors, expanded rail lines and installed massive cranes.
The Port Authority of New York  and New Jersey spent more than $1 billion to raise the level of the Bayonne Bridge to allow the big ships to pass under the roadway.
“It’s not like we didn’t know it was coming,” said Bethann Rooney, assistant director of port commerce for the Port Authority.
“We have done our homework.”

That could be bad news for the Southern California ports.
A study last year by the Boston Consulting Group and C.H. Robinson, a logistics and transportation outfit, estimated that the canal expansion could lead to as much as 10% of container traffic between East Asia and U.S. ports moving to the East Coast by 2020.
“They are taking jobs away from Southern Californians that today handle that cargo for the rest of the country,” said Paul Bingham, a trade economist with Economic Development Research Group Inc., a consulting firm in Boston.
“If you lose that cargo, the income doesn’t go to Californians, it goes to those other ports.”
If port officials in Southern California are worried, they are not letting on.
“I do think there is some small risk, a low single-digit risk, that some volume will divert,” said Jon Slangerup, the chief executive of the port of Long Beach.
“We may lose a little bit of business there.”

There are reasons to believe the effects will be limited.
While it may be cheaper to send Asia-made goods to the Midwest through the expanded canal, it is faster to send them through Los Angeles or Long Beach.
For time-sensitive products coming from China and elsewhere, a marginal savings in shipping costs may not outweigh the advantage of products reaching the market more expeditiously, experts said.
Experience could also work in favor of the  West Coast.
The California ports have far more experience than their East Coast counterparts handling behemoth cargo loads.
“The people on the eastern gulf coasts simply don’t have the infrastructure or the experience dealing with these massive volumes of cargo,” said O’Connell, the trade expert.

Perhaps the most important reason that Californians should not fear has to do with the ships themselves: They are getting bigger.
Some already in operation are too big to fit through the Panama Canal, and if the trend continues, there will be more of them.
The canal will be useless to them, making California their best option.

In Panama, few people seemed to be thinking about that as Sunday’s inauguration approached.
Heads of state, diplomats, shipping executives, port operators and other dignitaries were preparing for the ceremony, when a Chinese cargo ship makes the first complete crossing of the renovated canal.
For the thousands of workers who overhauled the canal, the day will be bittersweet.
They helped restore the nation’s signature landmark.
But many of them will also be looking for new jobs.
“We’d all like to stay on here,” said 30-year-old Junior Omar Moreno, who was manning the Pacific-facing locks on a recent morning, just below the new, eight-story control tower.
“It’s a good job, and we’re all proud of having contributed to the project.”