How accurate are nautical charts? 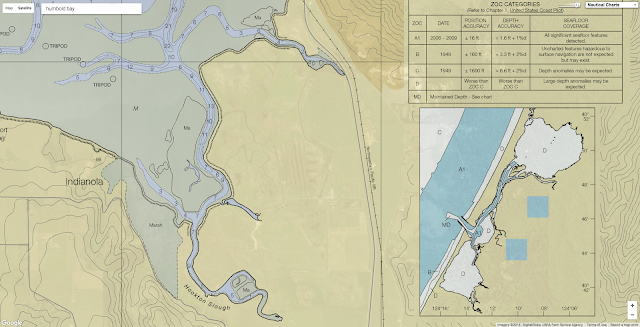 18622 Humboldt Bay
What’s so special about these charts?
They were the first NOAA charts that were kick-started with the Chart Automation Tool (CAT).
The CAT automates several chart finishing processes, allowing NOAA to prepare QC ready charts in as little as 3 days.

Charts will provide more information on “zone of confidence”

It is a major challenge – some might say an impossibility – to keep all thousand U.S. nautical charts up to date.
But exactly how out of date is the chart data?
Chart users will get a better idea now that Coast Survey is gradually rolling out a new chart feature called the zone of confidence, or “ZOC” box.
It will replace the source diagram that is currently on large-scale charts.
Source diagrams, and now the improved ZOC, help mariners assess hydrographic survey data and the associated level of risk to navigate in a particular area. 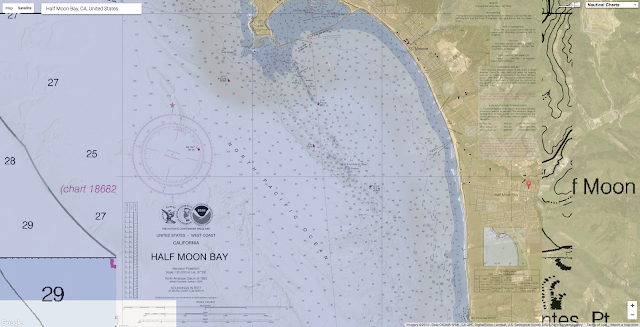 18622 Half Moon Bay (CA) in the GeoGarage platform

The first charts to show the new ZOC box are 18622, 18682, 18754, and 11328.
They were released on April 7.
Both source diagrams and ZOC diagrams consist of a graphic representation of the extents of hydrographic surveys within the chart and accompanying table of related survey quality categories. Where the old source diagrams were based on inexact and sometimes subjective parameters, however, the new ZOC classifications are derived more consistently, using a combination of survey date, position accuracy, depth accuracy, and sea floor coverage (the survey’s ability to detect objects on the seafloor).
To see the zones of confidence on charts, look for the chart markings (A1, A2, B, C, and D) on the chart itself.
Check the ZOC box (located on non-water portions of the chart) for the date of the data acquisition, the position accuracy, the depth accuracy, and characterization of the seafloor for each particular zone.

Why do users need a “zone of confidence?

The age and accuracy of data on nautical charts can vary.
Depth information on nautical charts, paper or digital, is based on data from the latest available hydrographic survey, which in many cases may be quite old.
In too many cases, the data is more than 150 years old. Sometimes, particularly in Alaska, the depth measurements are so old that they may have originated from Captain Cook in 1778.
Mariners need to know if data is old.
They need to understand the capabilities and the limitations of the chart.
In particular, the mariner should understand that nautical chart data, especially when it is displayed on navigation systems and mobile apps, possess inherent accuracy limitations.
Before the advent of GPS, the position accuracy of features on a paper chart was more than adequate to serve the mariner’s needs.
Twenty years ago, mariners were typically obtaining position fixes using radar ranges, visual bearings, or Loran C.
Generally, these positioning methods were an order of magnitude less accurate than the horizontal accuracy of the survey information portrayed on the chart.
Back then, Coast Survey cartographers were satisfied when we plotted a fix with three lines of position that resulted in an equilateral triangle whose sides were two millimeters in length at a chart scale of 1:20,000.
In real world coordinates, the triangle would have 40-meter sides.
Close enough!
Now, with GPS, charted locations that are off by 10 or 15 meters are not nearly close enough. Mariners now expect, just as they did 30 years ago, that the horizontal accuracy of their charts will be at least as accurate as the positioning system available to them.
Unfortunately, charts based on data acquired with old survey technologies will never meet that expectation. 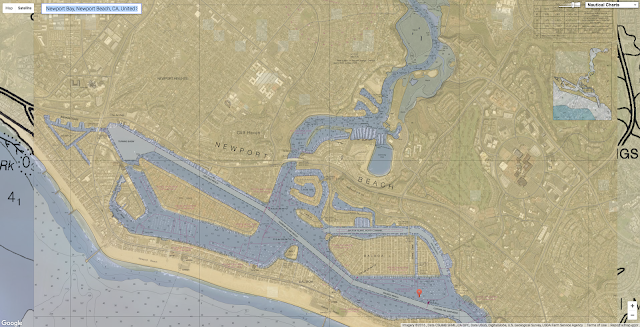 18754 Newport Bay in the GeoGarage platform

The overall accuracy of data portrayed on paper charts is a combination of the accuracy of the underlying source data and the accuracy of the chart compilation process.
Most nautical charts are made up of survey data collected by various sources over a long time.
A given chart might encompass one area that is based on a lead line and sextant hydrographic survey conducted in 1890, while another area of the same chart might have been surveyed in the year 2000 with a full-coverage shallow-water multibeam echo sounder.
In general, federal hydrographic surveys have used the highest standards, with the most accurate hydrographic survey instrumentation available at the time.
On a 1:20,000-scale chart, for example, the survey data was required to be accurate to 15 meters. Features whose positions originate in the local notice to mariners, reported by unknown source, are usually charted with qualifying notations like position approximate (PA) or position doubtful (PD). The charted positions of these features, if they do exist, may be in error by miles.
Similarly, the shoreline found on most NOAA charts is based on photogrammetric or plane table surveys that are more than 30 years old.

Another component of chart accuracy involves the chart compilation process.
Before NOAA’s suite of charts was scanned into raster format in 1994, all chart compilation was performed manually.
Cartographers drew projection lines by hand and plotted features relative to these lines.
They graphically reduced large-scale (high-detail) surveys or engineering drawings to chart scale. Very often, they referenced these drawings to state or local coordinate systems.
The data would then be converted to the horizontal datum of the chart, e.g., the North American 1927 (NAD27) or the North American Datum 1983 (NAD83).
In the late 1980s and early 1990s, NOAA converted all of its charts to NAD83, using averaging techniques and re-drawing all of the projection lines manually.
When NOAA scanned its charts and moved its cartographic production into a computer environment, cartographers noted variations between manually constructed projection lines and those that were computer-generated.
They adjusted all of the raster charts so that the manual projection lines conformed to the computer-generated projection.
Many electronic chart positional discrepancies that are observed today originate from the past graphical chart compilation techniques.
The manual application of survey data of varying scales to the fixed chart scale was a source of error that often introduced biases.
Unfortunately, on any given chart, the magnitude and the direction of these discrepancies will vary in different areas of the chart.
Therefore, no systematic adjustment can automatically improve chart accuracy. 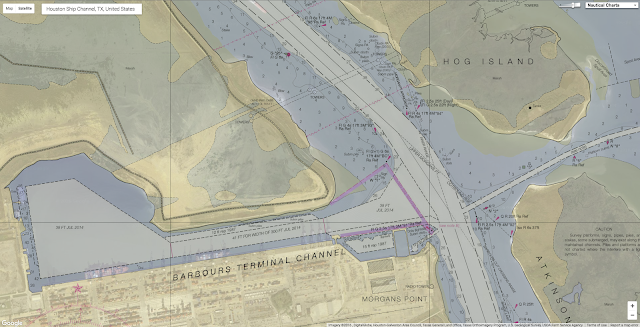 NOAA’s suite of over a thousand nautical charts covers 95,000 miles of U.S. coastline, and includes 3.4 million square nautical miles of U.S. jurisdiction within the Exclusive Economic Zone (which is an area that extends 200 nautical miles from shore.)
About half of the depth information found on NOAA charts is based on hydrographic surveys conducted before 1940.
Surveys conducted with lead lines or single-beam echo sounders sampled a small percentage of the ocean bottom.
Due to technological constraints, hydrographers were unable to see between the sounding lines. Depending on the water depth, these lines may have been spaced at 50, 100, 200, or 400 meters.
Today, as NOAA and its contractors re-survey areas and obtain full-bottom coverage, we routinely discover previously uncharted features (some that are dangers to navigation).
These features were either: 1) not detected on prior surveys; 2) man-made objects, like wrecks and obstructions, that have appeared on the ocean bottom since the prior survey; or 3) the result of natural changes that have occurred since the prior survey.

Coast Survey is also improving our chart production system.
As NOAA developed its charts over the centuries, cartographers relied on separate sets of data: one set for traditional paper charts, and another for the modern electronic navigational charts.
We are currently integrating a new charting system that will use one central database to produce all NOAA chart products.
The new chart system slims down the system while it beefs up performance, speeding new data and updates to all chart versions of the same charted areas and removing inconsistencies.
As always, NOAA asks chart users to let us know when you find an error on a NOAA chart. Just go to the discrepancy reporting system, give us your observation, and we will take it from there.