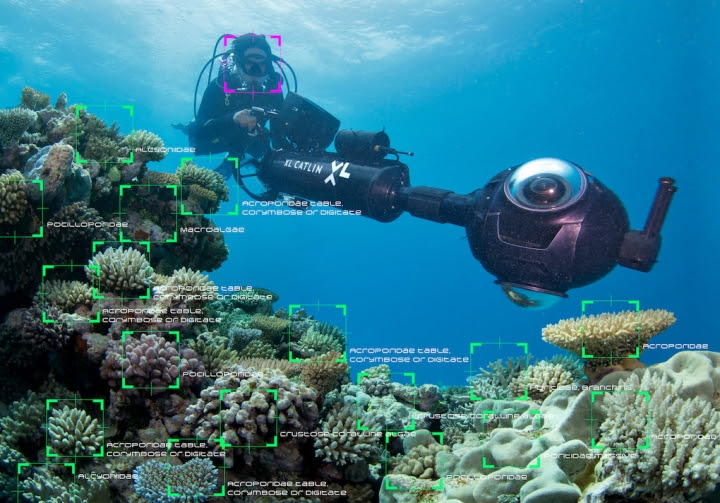 
Coral reefs are increasingly imperiled by global warming.
Rising temperatures and ocean acidification are destroying some of the world’s most stunning ecosystems.
That’s why scientists’ efforts to save them have been going into overdrive recently, working in labs and in the field to find out what makes some corals more resilient than others.
The latest tool in the fight to save reefs doesn’t require test tubes or flippers, though.
Instead, it requires microchips and computer coding that can analyze data orders of magnitude faster than the human eye.

The Catlin Global Reef Record is a first-of-its-kind global database and online standardized research tool relating to major coral reef ecosystems.
The Catlin Global Reef Record will enable scientists around the world to collaborate on understanding changes to coral reefs and related marine environments as a result of over-exploitation, pollution and climate change.
It is estimated that 500 million people globally depend on coral reefs for food and income and between one third and one half of corals around the world have been lost in the last 50 years.

Researchers with the XL Catlin Seaview Survey have been gathering a massive store of coral reef data over the past four years using Google Street View technology.
But it was almost too much of a good thing.
Their store of data was so large, it would take an expert up to three decades to sort through and catalog it.
Unfortunately, reefs don’t really have the luxury of waiting that long.
A global coral bleaching event is going into its third year.
It’s already affected 40 percent of the world’s coral reefs, including a widespread die-out in the Great Barrier Reef.
Rising ocean temperatures due to climate change are, in large part, to blame. Ocean acidification is already eating away at reefs as well.
Unless carbon pollution is reined in, many reefs could go extinct by mid-century.

American Samoa Before and After :
This is a video produced by Google showing coral bleaching before and after images from American Samoa which were uploaded into Google Street View in June 2015.
The images were taken by XL Catlin Seaview Survey.

The XL Catlin Seaview Survey has documented this bleaching as well as the reefs and species that have survived it.
Finding those survivors is incredibly important to scientists trying to preserve reefs, but they’re needles in a haystack of gigabytes of data.
“We started the project know we were going to gather a lot of data,” Richard Vevers, executive director of the XL Catlin Seaview Survey, said.
“We also knew early on we would have a problem analyzing images so we had to find a short cut.”
That shortcut has been to turn to computers and the concept of “deep learning” — basically training computer eyes to spot patterns and changes.
It’s a little like Facebook’s ability to recognize your friends in pictures from your last night out, but instead of beers with your buds, it's for corals and reef changes and saving species from going extinct.

Vevers and his cadre of reef scientists connected with computer scientists at the University of California, Berkeley’s Artificial Intelligence Research Center for the data analysis.
After training the computers to essentially be android coral reef scientists, they put them to task of analyzing the images.
At a clip of 90 images per minute, three graphics processing units were able to knock out the analysis in a matter of weeks with an identification success rate greater than 90 percent, or about on par with a trained expert.
On Wednesday, XL Catlin Seaview Survey released the new dataset to the public to aid in what Vevers said was a “shift in science from understanding the problem to looking for solutions.”
Those solutions could include targeted conservation efforts for vulnerable reefs and identifying the corals most resilient to climate change.
And while computers will aid scientists in identifying where the best places to preserve healthy reefs are, ultimately, the fate of corals rests in the world’s hands and is dependent on carbon pollution being reduced.