The footages of seizing the #British Oil tanker in strait of #Hormuz by #Iranian #IRGC. pic.twitter.com/MJDN6l5shH
— Barzan Sadiq (@BarzanSadiq) July 20, 2019

Also a war of images

From NY Times by By David D. Kirkpatrick and Stephen Castle

Britain on Saturday threatened Iran with “serious consequences” for seizing a British-owned oil tanker the previous evening as the government warned ships to avoid the crucial shipping lanes of the Strait of Hormuz.


The British government said in a statement after an emergency meeting that it had “advised U.K.
shipping to stay out of the area for an interim period.”

The crisis has caught Britain at a singularly vulnerable moment.
Prime Minister Theresa May is expected to resign on Wednesday.
A leadership contest within the governing Conservative Party to determine her successor has all but paralyzed the government.
And now the uncertainty about Britain’s internal direction is compounding the problem of forming a response to Iran’s seizure of the tanker.

The British defense minister, Penny Mordaunt, said in a television interview on Saturday that the ship had been intercepted in Omani, not Iranian, waters and called the seizure “a hostile act.” By Saturday afternoon, Britain had summoned the Iranian ambassador to register its protest, and a second emergency cabinet meeting was set to begin. 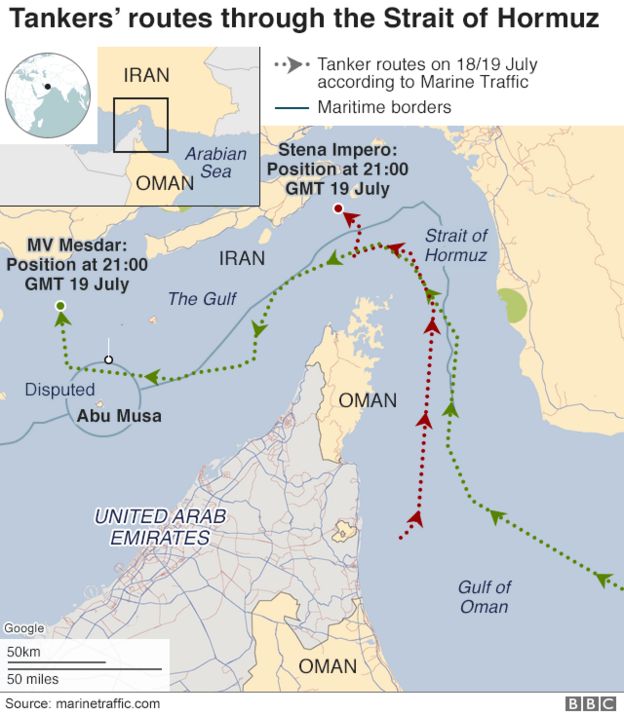 The capture of the tanker — two weeks after British forces impounded an Iranian tanker near Gibraltar — sharply escalates a crisis between Iran and the West after three months of rising tensions that last month brought the United States within minutes of a military strike against targets in Iran.
A fifth of the world’s crude oil supply is shipped from the Persian Gulf through the narrow Strait of Hormuz off the coast of Iran, and oil prices spiked sharply on Friday even before the British warning. 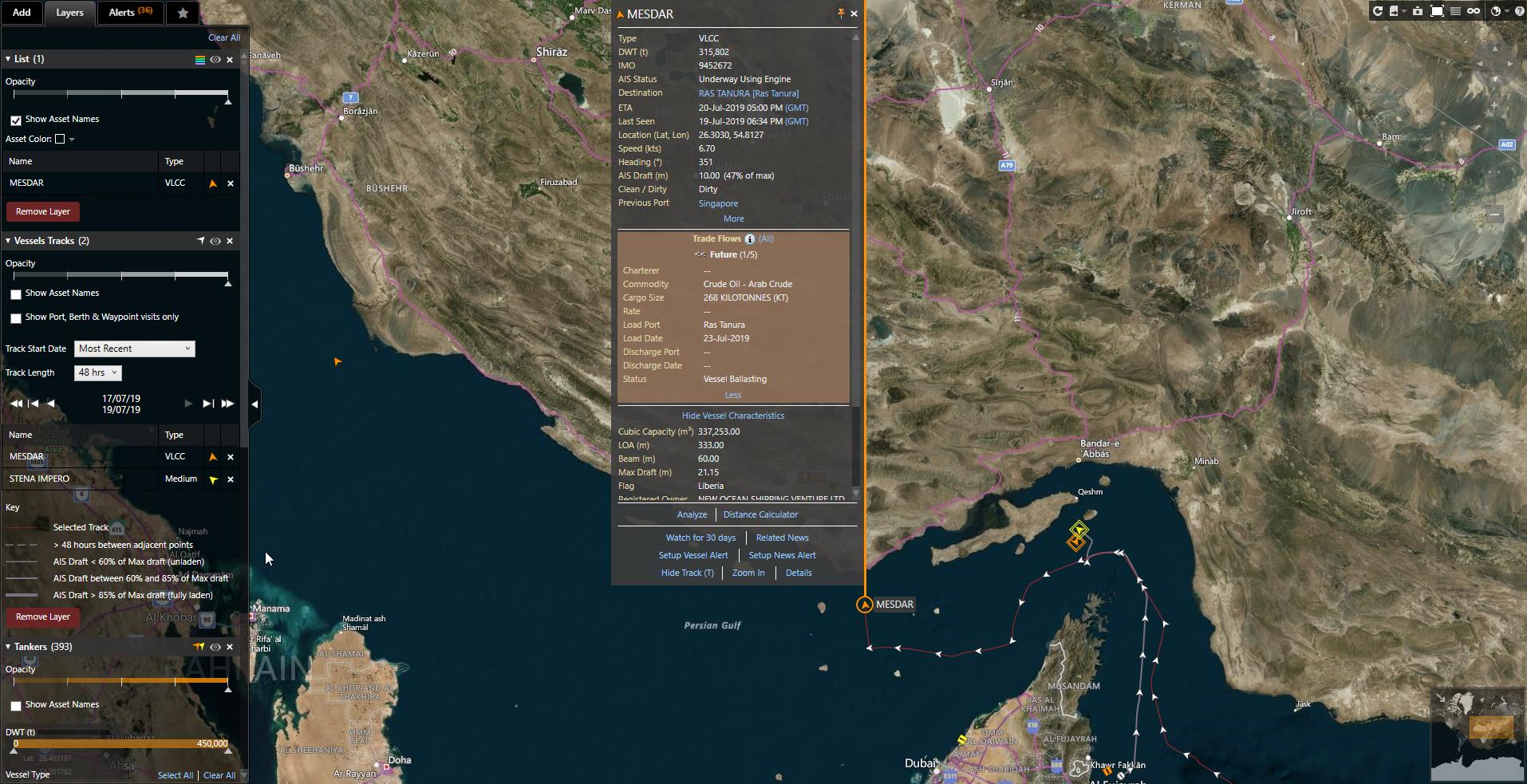 But the next moves in the showdown over the tanker are likely to turn on the outcome of the British leadership contest, and the favorite, Boris Johnson, a flamboyant former mayor of London and former foreign minister, is famously unpredictable. He has said during his campaign that he stands with the other European powers in their wish to avoid a confrontation with Iran.
But Mr. Johnson has also risen through his party railing against Europe and has sought closer ties to President Trump, who set the current cycle of confrontation in motion by attempting to squeeze Iran into renegotiating a 2015 nuclear accord with world powers.

That has increased speculation that the clash over the tanker may move Britain out of its current opposition to Mr. Trump over his feud with Iran.
Britain has so far stood with the other European powers seeking to defy the president and preserve the accord.

“There has to come a moment where the British government, and maybe France and Germany ask, ‘Is it really worth fighting Trump on all these fronts?’” said Robin Niblett, director of Chatham House, a London research institute.

Setting the stage for a prolonged standoff, Iranian news agencies reported on Saturday that all 23 crew members of the British-flagged tanker would be held onboard in Iran’s Bandar Abbas Port during a criminal investigation of the ship’s actions.

None of the crew members is British or American; their nationalities include Indian, Russian, Latvian and Filipino, the ship’s owner said in a statement.

A spokesman for Iran’s powerful Guardian Council, which oversees major foreign policy decisions, sought on Saturday to justify the seizure as “reciprocal action” after British forces had impounded the Iranian tanker near Gibraltar.

“The rule of reciprocal action is well known in international law,” the spokesman, Abbas Ali Kadkhodaei, said, according to the semiofficial Fars news agency.

But other Iranian authorities on Saturday added different new rationales for the seizure of the ship, saying for the first time that the vessel had been involved in an accident with an Iranian fishing boat and that the tanker had ignored distress calls.

The Islamic Revolutionary Guards Corps, which is in charge of Iranian naval activities in the Persian Gulf, had said on Friday that it had seized the ship for deviating from traffic patterns and polluting the waters.
The Revolutionary Guards had not mentioned a fishing boat. 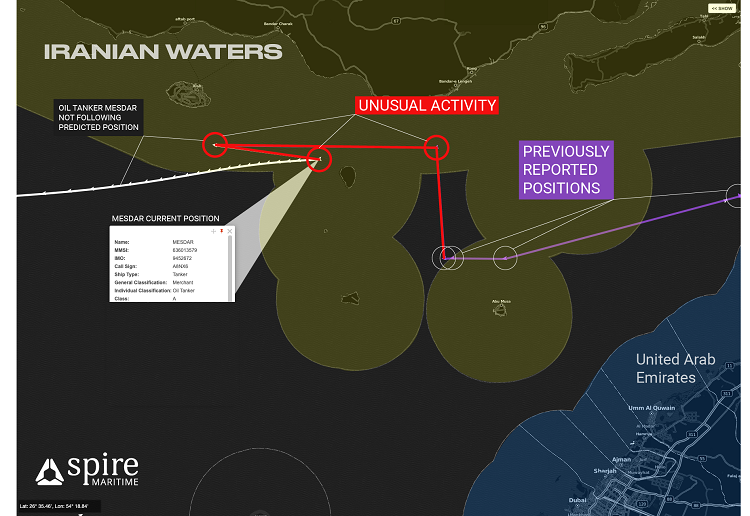 Stena Bulk, the owner of the ship, Stena Impero, said the tanker had been in “full compliance with all navigation and international regulations” when it was intercepted.

In Washington on Friday, Mr. Trump called Iran “nothing but trouble.” Mr. Trump told reporters on the South Lawn of the White House, “We’ll be working with the U.K.” Referring in vague terms to the close American alliance with Britain, he added, “We have no written agreement, but I think we have an agreement that is longstanding.”

United States Central Command, which oversees Middle East military operations, repeated in a statement late Friday that it was working on a “multinational effort” under the name Operation Sentinel to police the shipping routes.

The operation “will enable nations to provide escort to their flagged vessels while taking advantage of the cooperation of participating nations for coordination and enhanced maritime domain awareness and surveillance,” the statement said.

But it emphasized that Washington would not shoulder the burden alone: “While the United States has committed to supporting this initiative, contributions and leadership from regional and international partners will be required to succeed.”

France in a statement on Saturday called on Iran to respect “the principle of freedom of shipping in the Gulf.” Germany strongly condemned Iran’s actions as “unjustifiable.”
“Another regional escalation would be very dangerous” and “undermine all ongoing efforts to find a way out of the current crisis,” the German government warned in a statement.

The back-and-forth between Iran and the West has already included the imposition of sweeping new American economic sanctions.
Iran has responded with the calibrated resumption of an Iranian nuclear energy program that the West fears might lead to a nuclear bomb.

In a reminder that each minor collision risks the explosion of a more violent confrontation, Mr.
Trump last month ordered a missile strike in retaliation for the Iranian downing of the American drone.
He ultimately called the strike off only minutes before the launch.
Mr. Trump said the next day that he had concluded the loss of life from a missile strike would have been disproportionate to the shooting down of a drone.
But he later threatened the “obliteration” of parts of Iran if it targeted “anything American.”

At the core of the confrontation with the West is the Trump administration’s attempt to rip up and renegotiate the 2015 accord, which the United States and other world powers had reached with Iran to limit its nuclear program in exchange for relief from economic sanctions.

Having pulled the United States out of the deal last year, the Trump administration added comprehensive sanctions in May that were intended to block all of Iran’s oil exports, the lifeblood of its economy.
Iranian officials denounced the new penalties as “economic warfare.”

Iran has sought to push back against all the major powers, forcing them to feel some cost for their effective default on the promises 2015 accord as a result of Mr.
Trump’s sanctions.
That set the backdrop for a parallel clash with Britain that led to the seizure of the tanker.

Two weeks ago, the British military helped impound the Iranian tanker off Gibraltar on the suspicion that it was delivering oil to Syria in violation of European Union embargoes.

Iranian officials called the seizure of their ship an act of piracy and accused Washington of masterminding the capture as part of its pressure campaign.
Officers of the Revolutionary Guards threatened retaliation against a British ship.
Iranian boats sought unsuccessfully to stop one a few days later, but an accompanying British warship drove them away.

Jeremy Hunt, the British foreign secretary, on Saturday charged that Iran’s seizure had violated international law but said that Britain had followed proper legal procedures in stopping the Iranian tanker, Grace 1, near Gibraltar.

“Yesterday’s action in Gulf shows worrying signs Iran may be choosing a dangerous path of illegal and destabilising behavior after Gibraltar’s LEGAL detention of oil bound for Syria,” Mr.
Hunt wrote on Twitter Saturday morning.
“As I said yesterday our reaction will be considered but robust,” Mr. Hunt added.
“We have been trying to find a way to resolve Grace1 issue but WILL ensure the safety of our shipping.”

He added later that he had “expressed extreme disappointment” in a phone call with Iran’s foreign minister, Mohammad Javad Zarif.
Recounting a conversation they had a week earlier, Mr. Hunt said that Mr. Zarif had said he sought de-escalation but that “they have behaved in the opposite way.”
“This has 2 be about actions not words,” Mr. Hunt said on Twitter.

Mr. Hunt is challenging Mr. Johnson in the runoff within the Conservative Party to become Britain’s next prime minister.
If Mr. Hunt loses, his role overseeing the standoff with Iran might keep him in the job for the immediate term in the interest of continuity.
But the results would also put a question mark over his standing and staying power, further complicating the British response.

The fate of the Iranian tanker impounded near Gibraltar is in the hands of the courts there, and an early release of the ship to mollify the Iranians would “look very weak,” said Michael Stephens of the Royal United Services Institute, an independent research center.

“I don’t think we are in a position where we have the luxury of backing down,” he added.

That, in turn, adds to the pressure on the nuclear accord.
Britain has collaborated with the other European powers in seeking to preserve the deal, even joining efforts to set up an alternative trading platform that would allow Iran to evade the American sanctions.

If Britain joins the United States in re-imposing sanctions on Iran, that would all but snuff out any hope of saving the 2015 accord.

Tom Tugendhat, the chairman of the British parliamentary foreign affairs committee, wrote on Twitter that “the hiatus in power” in Britain had lasted too long.
“We are being tested by friends and enemies.
We need leadership,” he added.