The first small step to humanity’s future on the seas has been taken.
Are you ready to make the leap and live free on the sea?
In Episode 4, Chad and Nadia share what it’s like to live on the seastead and their hopes for the future.
see other episodes : Facing the storm / Raising the Spar / Lifting the stead

An American bitcoin investor and his Thai partner could face life in prison or even the death penalty for alleged violation of Thailand’s sovereignty by occupying a floating home off the country’s coast.

Chad Elwartowski and Supranee Thepdet (aka Nadia Summergirl) sought to be pioneers in the “seasteading” movement, which promotes living in international waters to be free of any nation’s laws.
But Thailand’s navy said Elwartowski and Thepdet posed a threat to the country’s national sovereignty, an offense punishable by life imprisonment or death. 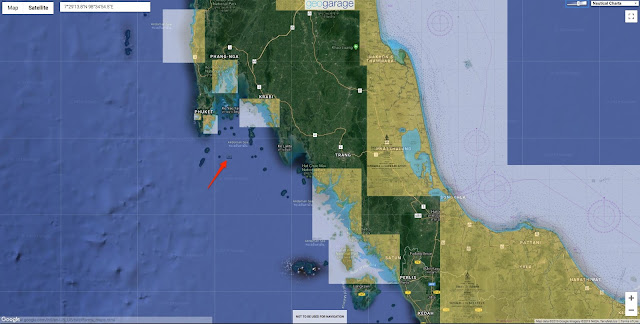 The cabin was situated within Thailand’s exclusive economic zone (EEZ), but not its territorial sea.
Under the United Nations Convention on the Law of the Sea (pdf), to which Thailand is a party, an EEZ extends 200 nautical miles from a nation’s coastline.
Within it, a state has exclusive rights to natural resources such as fish and oil but does not have full sovereignty.
It does have the latter within its territorial waters, which extend out 12 nautical miles from the shore.
Localization with the GeoGarage platform (Thaï nautical maps) 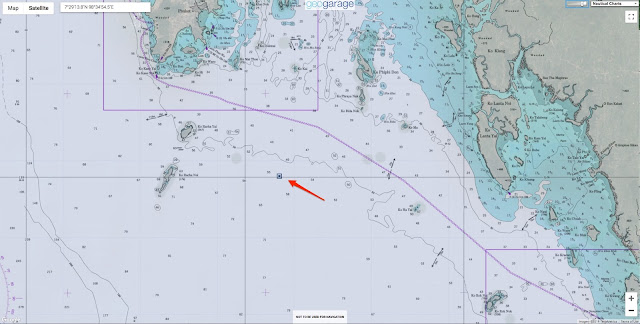 Thai authorities on April 13 raided the couple’s floating home in the Andaman Sea, about 12 nautical miles from shore. 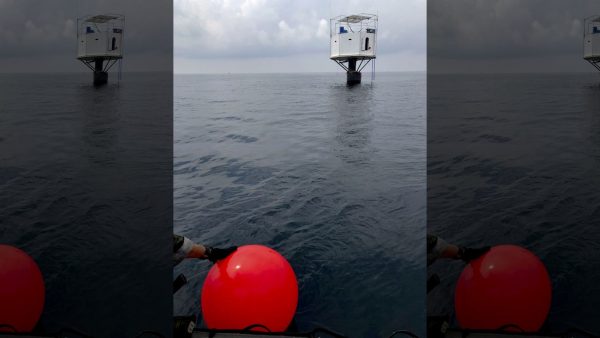 Thailand’s navy claims the couple endangered national sovereignty, an offense punishable by life imprisonment or death.
The couple was not at the home at the time of the raid on April 18, 2019. (Royal Thai Navy via AP)


Elwartowski and Thepdet were not at the home at the time of the raid and have gone into hiding.
In a Facebook post on Monday—since deleted—Elwartowski wrote, “Thailand wants us killed.”
“Hunting us down to our death is just plain stupid and highlights exactly the reason someone would be willing to go out in the middle of the ocean to get away from governments,” he wrote.
“We never had any ill intentions and I even state plainly several times that I would not want to be a citizen of any seastead nation that would have me.”

The couple wrote on their website that the floating home is anchored outside Thailand’s territorial waters, at least 12 nautical miles off the coast of Phuket.
“It’s designed to ignite an entire libertarian movement of freedom seekers gearing up to live in permanent dwellings at sea—outside of the jurisdiction of any government,” wrote Thepdet.

The claim is supported by an official statement released by Ocean Builders, the company who built the couple’s floating home, officially called XLII and billed as “the first seastead.”
“Our AIS beacon is still displaying our position 13 nautical miles from Thailand outside of Thailand’s territorial waters,” Ocean Builders wrote.
“It is claimed by the Thai navy through their media mouth pieces that the seastead is in a shipping lane,” Ocean Builders wrote.
“This makes it sound like there is heavy cargo traffic coming to Phuket. If anyone knows Phuket, they have one cargo port that gets maybe one or two cargo ships a week. They also admit that the seastead is in international waters, at least 12 nautical miles from land.” 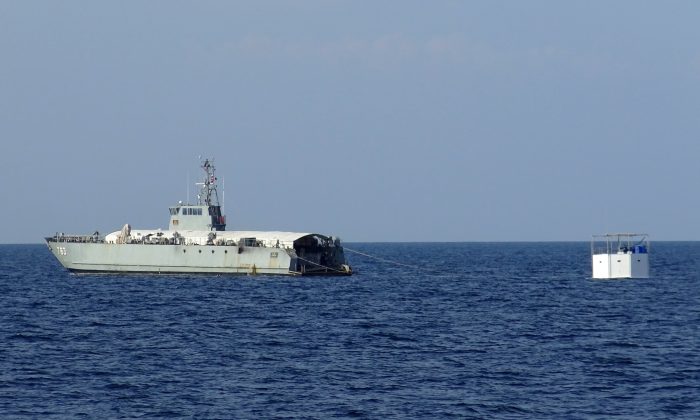 A Royal Thai navy ship drags a floating home, lived in by a U.S. man and his Thai partner, in the Andaman Sea, off Phuket Island in Thailand, on April 22, 2019.
(Stringer/Reuters)

But a Thai deputy naval commander insisted the project was a threat.
“This affects our national security and cannot be allowed,” Rear Adm. Wintharat Kotchaseni told Thai media on Tuesday, as cited by The Associated Press.
He said the floating house also posed a safety threat to navigation if it broke loose because the area is considered a shipping lane.

Thai police Col. Nikorn Somsuk told the South China Morning Post that the authorities were seeking clarification with the attorney general on how to proceed with the case since the outpost was technically in international waters.
“We have not met the couple yet. We have sent investigators to their home but they were not there,” he told The Post. “We don’t know what their thoughts are apart from the fact that it seems a bit extreme to want to be so isolated.”

He hinted the couple may not face the most serious punishment, telling the South China Morning Post, “As of now, there is no evidence that their actions pose a risk to Thai sovereignty.”

The couple has been charged with article 119 of the Thai Criminal Code, which prohibits any acts that cause a deterioration of Thailand’s independence.


Why seastead? Joe Quirk, co-author of the book "Seasteading, How Ocean Cities Will Change the World," has more than a couple of reasons.
Joe was one of dozens who attended the Seasteading Conference 2012 in San Francisco, which brought together dedicated adventure seekers and entrepreneurs looking to transform the ocean into the next frontier for humanity.
Every great change throughout history has begun with a group of individuals who dreamt up a desire, and then acted to make their vision a reality.
The number of reasons behind the desire to seastead are as numerous as the number of people in our community.
Why are you seasteading?

‘Excited About the Project’

“We were hoping to bring tourism to Phuket with an underwater restaurant, floating hotels, and medical research, tech jobs, etc. We had 3 wealthy entrepreneurs in the past week tell us they were coming to live in Phuket because they were excited about the project,” Elwartowski wrote on Facebook.

A promotional video from March showed the couple toasting champagne on the floating home.
“Ocean Builders is selling this ocean-front property at a fraction of the cost of any other place you would get oceanfront property,” Elwartowski says in the video, plugging the project as “something completely brand new.”

He added the home was the first of an additional 20 homes planned.
“May the seastead be a beacon to freedom lovers everywhere,” Elwartowski said in the video.

Meanwhile, Ocean Builders announced that due to the raid, the sale of its seastead homes “is to be postponed until we can get everything straightened out and figure out the best path forward for everyone.”

According to the company’s website, “seasteading is the concept of creating permanent dwellings at sea, called seasteads, outside the territory claimed by any government. The term is a combination of the words sea and homesteading.”