How red crabs on Christmas Island speak for the tropics 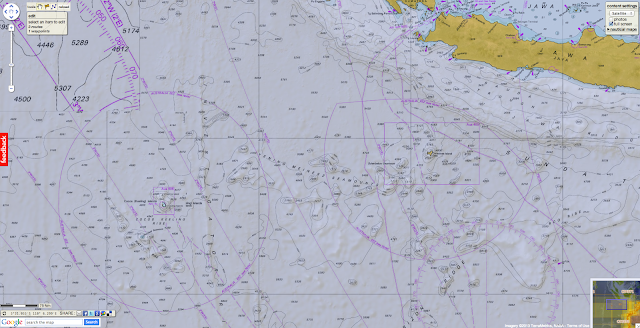 Christmas Island red crabs are native to the small Australian territories of Christmas Island and the Cocos (Keeling) Islands, which are in the Indian Ocean.
>>> geolocalization with the Marine GeoGarage <<<

Each year, the land-dwelling Christmas Island red crab takes an arduous and shockingly precise journey from its earthen burrow to the shores of the Indian Ocean where weeks of mating and egg laying await.

Each year, millions of Christmas Island red crabs make a two-week journey to the coast to mate.
The migration begins in November at the start of the rainy season, and female crabs must release their eggs into the ocean before the morning of the high tide that precedes the December new moon.
The researchers found that a late or light rainy season can delay or entirely cancel this meticulous process.

Native to the Australian territories of Christmas Island and the Cocos (Keeling) Islands, millions of the crabs start rolling across the island roads and landscape in crimson waves when the November rains begin.
After a two-week scuttle to the sea, the male crab sets up and defends a mating burrow for himself and a female of his kind, the place where she will incubate their clutch for another two weeks.
Before the morning of the high tide that precedes the December new moon, the females must emerge to release their millions of eggs into the ocean.
A month later, the next generation of crabs comes ashore.
But a lack of rain can delay or entirely cancel this meticulous process, according to research conducted through Princeton University that could help scientists understand the consequences of climate change for the millions of migratory animals in Earth's tropical zones.

The researchers report in the journal Global Change Biology that the crabs' reproductive cycle tracked closely with the amount and timing of precipitation.
Writ large, these findings suggest that erratic rainfall could be detrimental to animals that migrate with the dry-wet seasonal cycle that breaks up the tropical year, the researchers report.
If fluctuations in rainfall become more extreme and frequent with climate change, then scores of animals could be in trouble — not just the migrators themselves, but also the creatures reliant on them for food.

Lead author Allison Shaw, who conducted the work as a Princeton doctoral student in ecology and evolutionary biology, explained that what scientists understand about the possible impact of a warming planet on animal movement is dominated by studies of how creatures that migrate with the summer-to-winter seasonal shifts of Europe and North America will be affected by changes such as the severity and duration of summers and winters.
For tropical creatures such as the Christmas Island red crabs, or the wildebeests and gazelles of Africa, however, the regular quest for safety, food and reproduction is driven by wet and dry seasons.
Yet how the erratic rainfall expected to accompany an altered climate will affect these animals is not well understood, Shaw said.
"Potentially there's been a perspective bias in how migratory species are studied, and this particular species represents two perspectives that have not been well documented — species that are migrating because they have to breed in a certain area, and species that are migrating in response to rainfall," said Shaw, a postdoctoral researcher at the Australia National University who will start as a University of Minnesota assistant professor of ecology in 2014.
"Targeting those two types of migration patterns that have so far been understudied is really what we're hoping to accomplish with this paper, and to encourage more studies in those areas," Shaw said.

Migratory animals have a role in the ecosystems spanning the territory they traverse.
For instance, whale sharks migrate to Christmas Island to feast on the red crabs' larvae.
As the parental crabs journey to the coast and back, they feed on plants and saplings that keep the island from being overgrown.

Shaw and her co-author Kathryn Kelly, an oceanography professor at the University of Washington, obtained migration data for 36 years that fell between 1919 and 1939, and 1976 to 2011
They predicted the egg-release date for each year, and compared the later figures to actual rainfall measurements from 1973 to 2011.
Except in three years, the crabs did not launch their procreative journey if there had not been at least 22 millimeters (0.87 inches) of rainfall.
A light or late rainy season could push their journey forward or back months — in 1989, for instance, a November dry spell followed by heavy rain in late December kept the crabs in their burrows until early January.
During the especially dry 1997 season, the crabs never migrated or mated.
The culprit was a strong El Niño, the warm-water climate pattern that creates dry conditions in the Indian Ocean.
The occurrence of the El Niño is projected to become more common as the planet gets hotter.
"We know that 1997 was a very big El Niño event and we can predict changes in migration patterns by using climate models that suggest that El Niño frequencies will potentially increase in the future," Shaw said.
"So, years like this could potentially become more common. If the crabs' response is to not migrate in El Niño years, that's going to be a very big problem."
Climate change could be a special challenge to species such as Christmas Island red crabs or sea turtles that migrate to specific locations to reproduce, Shaw said.
These animals do not live and breed in the same ecosystem, so any obstacle between one location and the other threatens their survival as a species.
"If they don't migrate, they can't reproduce," Shaw said.
"That's true for a subset of migratory species that have to breed in a specialized area, but spend most of their adult lives in a different area. They rely on migration to bring them between the two areas that they need. On the other hand, species like many temperate birds migrate to avoid harsh winters, but if winters become less harsh they can still survive even if they don't migrate."

The researchers found that the crabs largely only migrate if there has been at least 22 millimeters (0.87 inches) of rainfall.
The crabs never migrated or mated during the especially dry 1997 season because of a strong El Niño, the warm-water climate pattern that creates dry conditions in the Indian Ocean.
The occurrence of the El Niño is projected to become more common as the planet gets hotter.

The movement of little red crabs does not only benefit the species itself, Shaw said.
Migratory animals have a role in the ecosystems spanning the territory they traverse.
For instance, whale sharks migrate to Christmas Island to feast on the red crabs' larvae.
As the parental crabs journey to the coast and back, they feed on plants and saplings that keep the island from being overgrown, Shaw said.
"Migratory species by definition are traveling either long distances or spanning across different ecosystems," Shaw said.
"The crabs migrate from terrestrial areas to drop their eggs in marine environments.
"Because they're spanning these ecosystems, they have the potential to impact not only marine environments and species such as the whale sharks, but also terrestrial species and forest dynamics," she said.
"If you took away migratory species you could potentially be affecting multiple ecosystems."

David Sims, who heads the behavioral ecology group at the Marine Biological Association in England, said that most climate-change studies relate to temperate species because the outcome of climate change has often been more clearly observed outside of the tropics.
"I suspect most studies have been on temperate species because the long-term datasets needed to support robust analysis are more available for species in these regions," said Sims, who is familiar with the research but had no role in it.
"In addition, some of the largest changes in sea temperatures seen globally have been recorded in temperate regions such as the North Sea, so biological signals have been clearer."
The work by Shaw and Kelly might help provide a basis for applying research on temperate species to their counterparts along the equator, Sims said.
"The paper exemplifies well that the migration timing of tropical species is perhaps more similar to the responses of temperate species than previously realized," Sims said.
"Generally it seems that ectothermic [cold-blooded] species' migrations [such as that of the red crabs] correlate with environmental temperature changes, however the picture for individual species can be complex."

Shaw, who received her Ph.D. from Princeton in 2012, began the study at the University while planning a research trip to Christmas Island.
Her research focuses on modeling migratory patterns and determining why animals migrate in the first place.
Her interest in the red crabs began in 2008 when, as a Princeton doctoral student funded by the National Geographic Society/Waitt Grants Program, Shaw studied how size, sex and other factors influence if a red crab migrates.
She used global climate data to time a second visit in 2009 with the crabs' migration, but was at first disappointed when climate alone did not seem to precisely predict crab movement.
After reading more about climate change and migration, Shaw realized that her finding that climate generally influenced migration via rainfall was valuable.
"In the process of trying to ask this question about timing we were able to link migration patterns to rainfall, and rainfall to El Niño and global climate patterns," Shaw said.
"I realized that, seen in a different light, the analysis we had done on the crabs was quite valuable — it demonstrated a connection between climate and migration through rainfall, which hadn't been done for many species."
The paper, "Linking El Niño, local rainfall and migration timing in a tropical migratory species," was published in the November 2013 edition of Global Change Biology.
This work was supported by grants from the National Science Foundation Graduate Research Fellowships program (grant number DGE-0646086), the National Geographic/Waitt Institute for Discovery, NASA (grant number 61-7449) and the University of Washington.