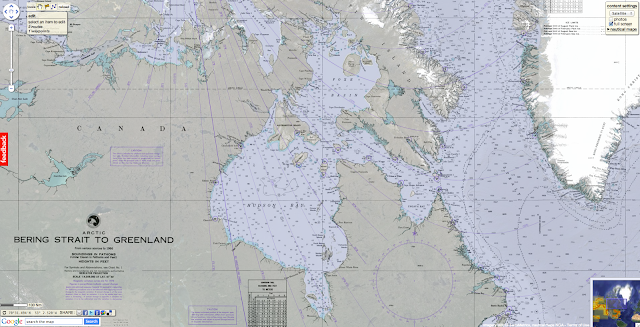 In exploring the lakes of the Hudson Bay Lowlands, five researchers have found one of the world's last refuges from global warming has been heating up dramatically since the mid-1990s
>>> geolocalization with the Marine GeoGarage <<<

The Arctic has experienced some of Earth's first and greatest effects of climate change, but the icy lowlands around Hudson Bay have remained remarkably resistant to warming—until recently.
A new study reports that, since the mid-1990s, aquatic ecosystems in one of the Arctic's last refugia have undergone dramatic climate-driven changes and appear to have reached an ecological tipping point.

While local temperatures had remained relatively steady before the last two decades, they've risen since then at rates that are extremely high even for the Arctic.
The increase has changed the mix of freshwater organisms that anchor local food chains in a way never before seen over centuries of historical record.
(Related: "Summer Arctic Sea Ice Recovers From 2012, But Trend 'Decidedly' Down.")

"The Arctic is often described as Earth's 'canary in the coal mine' because it's the first area to show change. Shifts also happen very quickly there," said John Smol, a paleolimnologist at Queen's University in Kingston, Ontario, whose new research on the area was released today.
Smol added that, although data show Arctic warming dating back to the 1800s, there were always a few refugia that seemed relatively resistant to change—including this area around Hudson Bay.
"There were good reasons for that," he said.
"Hudson Bay is the second largest inland sea in the world, and it is choked with ice that helped keep the area cool," he said.
"So it had to pass a kind of tipping point. Only since the mid-1990s has it warmed up enough that it started losing its ice."
Hudson Bay has warmed about three degrees Celsius since the 1990s, and change has accelerated, said Smol.
"We see some striking ecosystem shifts in these lakes."
Smol pointed to increased stratification in the lake by temperature layers and shifts in algae.

While the area's native peoples maintain traditional knowledge of past conditions and stress significant recent changes, there isn't any long-term historical record of climatological data in the region.
But the evidence for these changes and their unique historical context is locked in mud on the bottom of local lakes in what Smol calls "natural archives."
(Related: "As Arctic Melts, a Race to Test Oil Spill Cleanup Technology.")

"Lake sediments slowly accumulate, 24 hours a day and 365 days a year, layering and preserving an incredible amount of information in the mud," Smol said.
"So they are like a paleoclimatological history book if we learn to pull the information out of them."
Many organisms left microscopic fossils behind, especially algae.
Since different species survive under different conditions—like altered water chemistry or icy flows, compared with more open water—scientists can work out past conditions by studying such tiny fossils.
Sediment cores and the ancient algae they contain go back a thousand years in some cases and show that the Hudson Bay region's lakes experienced very little biological change over the centuries—until the past few decades.
After the mid-1990s, the aquatic biota in the sediment record show striking shifts in ecosystems that are very similar to those seen elsewhere across the Arctic in regions where air temperatures warmed and time periods of ice-free water increased.
"Essentially, this region warmed a couple of decades later than most of the rest of the Arctic, and the lake flora has experienced rapid shifts similar to previous changes in other lakes," said Konrad Hughen, a researcher at the Woods Hole Oceanographic Institution who was not affiliated with the study.
"One important observation they make is that the timing of these late changes coincides with local warming, not regionally increased nitrogen [nutrient] deposition. So, this supports the previous conclusions about changes in other lakes around the Arctic that they were caused by widespread warming and not nutrient changes."

On the other side of the globe, Antarctic sea ice has expanded so much it set a record—for the second year in a row.
Back-to-back iciest years since record keeping began in 1978 have left scientists searching for explanations—especially because the Southern Ocean waters below have continued to warm. (Related: "Antarctic Sea Ice Hits Record ... High?")
Physical changes on tap around Hudson Bay could mirror those seen earlier in the high Arctic, Smol said, including less lake ice, shallower or dried-up lakes and ponds, and the loss of productive wet peat lands.
Recent studies have suggested negative impacts on brook charr and other fish important to local peoples who must deal with the shifting landscape.
"There are real changes happening, and now we have paleoclimatological records," Smol said.
"This was one of the last holdouts in the Arctic, but now I feel we've lost it and we're entering uncharted territory." (Related: "Why Predicting Sea Ice Cover Is So Difficult.")

The research was published in Proceedings of the Royal Society B.