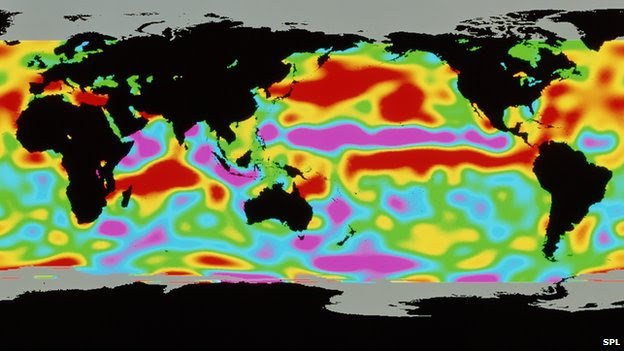 From BBC (by Matt McGrath)


Scientists say they are more certain than ever about the impact of global warming on a critical weather pattern.
The El Nino-Southern Oscillation (ENSO) occurs in the Pacific Ocean but plays an important part in the world's climate system.
Researchers have until now been unsure as to how rising temperatures would affect ENSO in the future.
But this new study suggests that droughts and floods driven by ENSO will be more intense.


The ENSO phenomenon plays a complicated role in the global weather system.
The El Nino part of the equation sees a warming of the eastern and tropical Pacific, while its cooler sister, La Nina, makes things chillier in these same regions.

Normal Condition
Normally, sea surface temperature is about 14°F higher in the Western Pacific than the waters off South America.
This is due to the trade winds blowing from east to west along the equator allowing the upwelling of cold, nutrient rich water from deeper levels off the northwest coast of South America.
Also, these same trade winds push water west which piles higher in the Western Pacific.
The average sea-level height is about 1½ feet higher at Indonesia than at Peru.
The trade winds, in piling up water in the Western Pacific, make a deep 450 feet (150 meter) warm layer in the west that pushes the thermocline down there, while it rises in the east.
The shallow 90 feet (30 meter) eastern thermocline allows the winds to pull up water from below, water that is generally much richer in nutrients than the surface layer.

El Niño conditions
However, when the air pressure patterns in the South Pacific reverse direction (the air pressure at Darwin, Australia is higher than at Tahiti), the trade winds decrease in strength (and can reverse direction).
The result is the normal flow of water away from South America decreases and ocean water piles up off South America. This pushes the thermocline deeper and a decrease in the upwelling.
With a deeper thermocline and decreased westward transport of water, the sea surface temperature increases to greater than normal in the Eastern Pacific.
This is the warm phase of ENSO, called El Niño.
The net result is a shift of the prevailing rain pattern from the normal Western Pacific to the Central Pacific.
The effect is the rainfall is more common in the Central Pacific while the Western Pacific becomes relatively dry.

La Niña conditions
There are occasions when the trade winds that blow west across the tropical Pacific are stronger than normal leading to increased upwelling off South America and hence the lower than normal sea surface temperatures.
The prevailing rain pattern also shifts farther west than normal.
These winds pile up warm surface water in the West Pacific.
This is the cool phase of ENSO called La Niña.
What is surprising is these changes in sea surface temperatures are not large, plus or minus 6°F (3°C) and generally much less.
Effects of ENSO in the Pacific (NOAA)

Impacts across the world

Like water in a bathtub, the warmer or cooler waters slosh back and forth across the Pacific Ocean. They are responsible for rainfall patterns across Australia and the equatorial region, but their effects are also felt much further away.
During the Northern Hemisphere winter, for example, you can get more intense rainfall over the southern part of the US in a warmer El Nino phase.
For years, scientists have been concerned about how this sensitive weather system might be changed by rising temperatures from global warming.

Now, in this new paper, published in the journal Nature, researchers give their most "robust" projections yet.
Using the latest generation of climate models, they found a consistent projection for the future of ENSO.
According to the lead author, Dr Scott Power from the Australian Bureau of Meteorology, global warming interferes with the way El Nino temperature patterns affect rainfall.
"This interference causes an intensification of El Nino-driven drying in the western Pacific and rainfall increases in the central and eastern equatorial Pacific," he said.

According to Dr Wenju Cai, a scientist at the Commonwealth Scientific and Industrial Research Organisation (CSIRO), who was not involved with the study, the paper is "significant".
"Up until now, there has been a lack of agreement among computer models as to how ENSO will change in the future," he explained.
"This paper is significant in that there is stronger agreement among different climate models in predicting the future impact.
"This study finds that both wet and dry anomalies will be greater in future El Nino years. This means that ENSO-induced droughts and floods will be more intense in the future."