Stemming the rise of a sea of noise 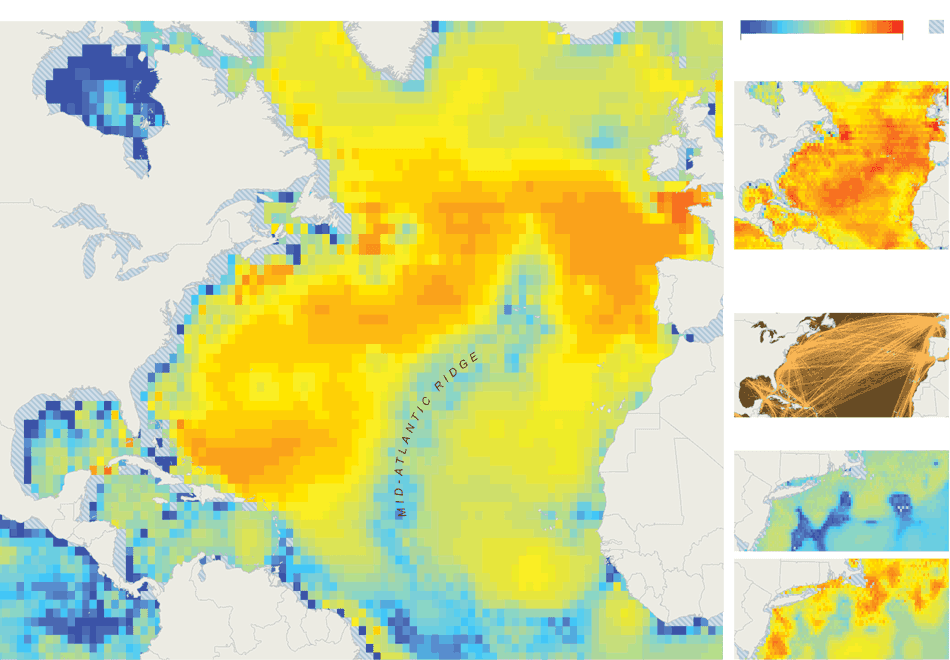 When a hurricane forced the Nautilus to dive in Jules Verne’s “Twenty Thousand Leagues Under the Sea,” Captain Nemo took the submarine down to a depth of 25 fathoms, or 150 feet.
There, to the amazement of the novel’s protagonist, Prof. Pierre Aronnax, no whisper of the howling turmoil could be heard.
“What quiet, what silence, what peace!” he exclaimed.
That was 1870.

Today — to the dismay of whale lovers and friends of marine mammals, if not divers and submarine captains — the ocean depths have become a noisy place.

The causes are human: the sonar blasts of military exercises, the booms from air guns used in oil and gas exploration, and the whine from fleets of commercial ships that relentlessly crisscross the global seas.
Nature has its own undersea noises.
But the new ones are loud and ubiquitous. 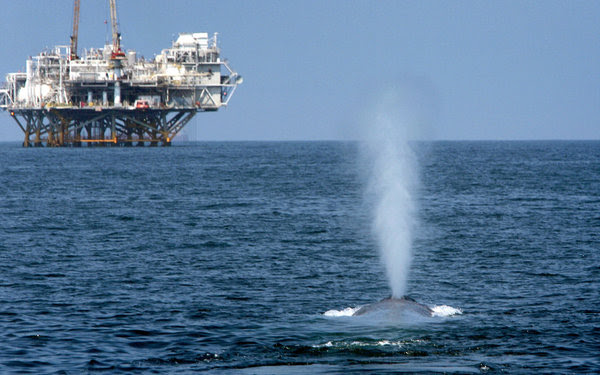 Marine experts say the rising clamor is particularly dangerous to whales, which depend on their acute hearing to locate food and one another.

To fight the din, the federal government is completing the first phase of what could become one of the world’s largest efforts to curb the noise pollution and return the sprawling ecosystem to a quieter state.

It is no small ambition: the sea covers more than 70 percent of the planet’s surface.
But scores of the ocean visualizations have now been made public.

The federal effort seeks to document human-made noises in the ocean and transform the results into the world’s first large sound maps.
The ocean visualizations use bright colors to symbolize the sounds radiating out through the oceanic depths, frequently over distances of hundreds of miles.
Several of the larger maps present the sound data in annual averages — demonstrating how ages in which humans made virtually no contribution to ocean noise are giving way to civilization’s roar.

The overall purpose is to better understand the cacophony’s nature and its impact on sea mammals as a way to build the case for reductions.

“It’s a first step,” Leila T. Hatch, a marine biologist and one of the project’s two directors, said of the sound maps. “No one’s ever done it on this scale.”

The National Oceanic and Atmospheric Administration began the effort in 2010 at the behest of Jane Lubchenco, a prominent marine biologist who is the first woman to head the agency. Dr. Hatch and her colleagues assembled a team of sound experts, including HLS Research, a consulting firm in La Jolla, Calif. This summer, they unveiled their results on the Web, as did a separate team of specialists that sought to map the whereabouts of populations of whales, dolphins and porpoises.

Michael Jasny, a senior policy analyst with the Natural Resources Defense Council, a private group in New York that has sued the Navy to reduce sounds that can harm marine mammals, praised the maps as “magnificent” and their depictions of sound pollution as “incredibly disturbing.”

“We’ve been blind to it,” Mr. Jasny said in an interview.
“The maps are enabling scientists, regulators and the public to visualize the problem. Once you see the pictures, the serious risk that ocean noise poses to the very fabric of marine life becomes impossible to ignore.”

Legal experts say the new findings are likely to accelerate efforts both domestically and internationally to deal with the complicated problem through laws, regulations, treaties and voluntary noise reductions.

The government already has some authority to regulate oceanic sound in United States waters through the Endangered Species Act and the Marine Mammal Protection Act, though exemptions to these laws exist for the military.

The International Maritime Organization, a United Nations body responsible for improving marine safety and reducing ship pollution, also has the authority to set acoustic standards.
In the past few years, encouraged by the United States, it began discussing how to achieve voluntary noise reductions.

Since many commercial vessels are registered abroad, and most shipping noises arise in international waters, the organization’s backing is seen as crucial for reductions to be substantial enough to have global repercussions.

“Right now we’re talking about nonbinding guidelines,” said Michael Bahtiarian, an adviser to the United States delegation to the maritime organization and a senior official at Noise Control Engineering, a company outside Boston that specializes in reducing ship noise and vibrations.
“At a minimum, the goal is to stop the increases.”

The oceanic roar originates because of the remarkable — and highly selective — way in which different kinds of waves propagate through seawater.
While sunlight can penetrate no more than a few hundred feet, sound waves can travel for hundreds of miles before diminishing to nothingness.

Sea mammals evolved sharp hearing to take advantage of sound’s reach and to compensate for poor visibility.
The heads of whales and dolphins are mazes of resonant chambers and acoustic lenses that give the animals not only extraordinary hearing but complex voices they use to communicate.

In recent decades, humans have added raucous clatter to the primal chorus.
Mr. Bahtiarian noted that the noise of a typical cargo vessel could rival that of a jet.
Even louder, he added, are air guns fired near the surface from ships used in oil and gas exploration.
Their waves radiate downward and penetrate deep into the seabed, helping oil companies locate hidden pockets of hydrocarbons.

Marine biologists have linked the human noises to reductions in mammalian vocalization, which suggests declines in foraging and breeding.

Worse, the Navy estimates that blasts from its sonars — used in training and to hunt enemy submarines — result in permanent hearing losses for hundreds of sea mammals every year and temporary losses for thousands.
All told, annually the injured animals number more than a quarter million.

The federal sound study examined all these noises but zeroed in on commercial shipping because it represented a continuous threat, in contrast to sporadic booms.
For North Atlantic shipping, the project drew up more than two dozen maps.
All their scales went from red (115 decibels at the top) to orange and yellow, and then to green and blue (40 decibels at the bottom).
The maps presented the results in terms of annual averages rather than peaks.

A decibel is a measure of noise, and peak levels underwater can be incredibly loud.
When monitored by a hydrophone at a distance of one meter (about three feet), a seismic gun produces 250 decibels, an oil tanker 200 decibels and a tugboat 170 decibels, according to Mr. Bahtiarian.

To draw up its annual maps, the sound project used computers to average out such peaks over time, as well as to slowly diminish the noises as they traveled over the ocean’s vast reaches.
The study also chose to model the low frequencies used by sea mammals for hearing and vocalization, and tracked how far the sounds penetrated.

Maps of the North Atlantic show mostly oranges in the upper waters, but many blues appear as the readings go downward as deep as one kilometer, or six-tenths of a mile.
At that depth, the sound maps clearly show the ability of the Mid-Atlantic Ridge — a mountain chain that runs down the ocean’s middle — to diminish the radiating noises by breaking up patterns of sound waves.

Dr. Hatch, of the sound study, said too many areas of the ocean surface (where sea mammals and whales spend most of their time) are orange in coloration, denoting high average levels.
“It’s like downtown Manhattan during the day, only not taking into account the ambulances and the sirens,” she said. “I’d be happier saying it was like a national park.”

Vessels for fishing and research, including new ships being built for N.O.A.A., are already being quieted around the world.
The trend derives not so much out of concern for sea mammals but from the realization by oceanographers that quiet ships let them do better science.

Marine engineers say the mechanics of ship quieting are relatively straightforward if applied in the design stage.
The biggest factor is the ship’s propeller, which has to be shaped exactly right to lessen cavitation.
The noise arises when the force of a propeller cutting through seawater results in millions of voids and bubbles, which then collapse violently.
Experts say quiet propellers have a benefit beyond helping sea mammals in that some kinds can reduce fuel consumption.

Other measures for quieting include adding layers of sound-absorbing tiles to the walls of noisy rooms as well as mounting engines, pumps, air compressors, and other types of reciprocating machinery on vibration isolators.
Mr. Bahtiarian of Noise Control Engineering, who has written extensively on the topic in professional journals and for expert committees, noted that a parallel to ship quieting had been under way in the airline industry for decades.
City officials and airport neighbors, as well as federal officials, have prodded the manufacturers of jet engines to find ways of reducing noise.

Experts note that the magnitude of the problem on land and sea is similar, in that the global fleets of commercial jets and ships both number in the tens of thousands.
But designing better ships to quiet the ocean, Mr. Bahtiarian said, will take longer.
“A ship’s lifetime is 30 or even 50 years,” he noted, “so it could be a lot longer” before improved designs start transforming the fleet.

Still, Mr. Bahtiarian added, the quieting trend seems inevitable given the new reports about sound pollution and rising awareness about the dangers to whales, dolphins and other sea mammals.
“The technology is there,” he said.
“It seems like it’s just a matter of time.”