In the ocean, it’s snowing microplastics 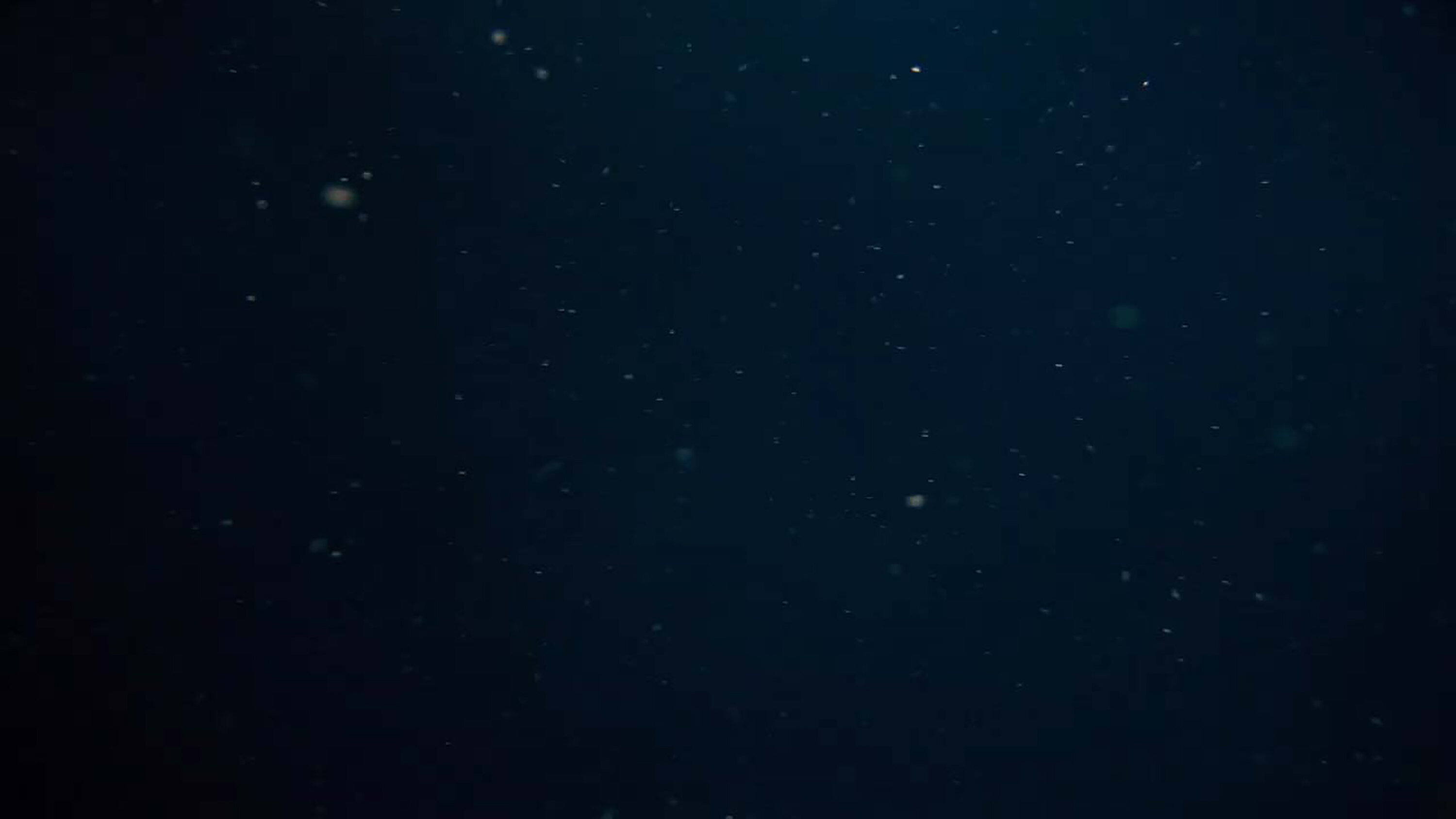 Tiny bits of plastic have infiltrated the deep sea’s main food source and could alter the ocean’s role in one of Earth’s ancient cooling processes, scientists say.
From NYTimes By Sabrina Imbler

The snow begins as motes, which aggregate into dense, flocculent flakes that gradually sink and drift past the mouths (and mouth-like apparatuses) of scavengers farther down.
But even marine snow that is devoured will most likely be snowfall once more; a squid’s guts are just a rest stop on this long passage to the deep.

Although the term may suggest wintry whites, marine snow is mostly brownish or grayish, comprising mostly dead things.
For eons, the debris has contained the same things — flecks from plant and animal carcasses, feces, mucus, dust, microbes, viruses — and transported the ocean’s carbon to be stored on the seafloor.
Increasingly, however, marine snowfall is being infiltrated by microplastics: fibers and fragments of polyamide, polyethylene and polyethylene terephthalate.
And this fauxfall appears to be altering our planet’s ancient cooling process.

Every year, tens of millions of tons of plastic enter Earth’s oceans.
Scientists initially assumed that the material was destined to float in garbage patches and gyres, but surface surveys have accounted for only about one percent of the ocean’s estimated plastic.
A recent model found that 99.8 percent of plastic that entered the ocean since 1950 had sunk below the first few hundred feet of the ocean.
Scientists have found 10,000 times more microplastics on the seafloor than in contaminated surface waters.

Marine snow, one of the primary pathways connecting the surface and the deep, appears to be helping the plastics sink.
And scientists have only begun to untangle how these materials interfere with deep-sea food webs and the ocean’s natural carbon cycles.

“It’s not just that marine snow transports plastics or aggregates with plastic,” Luisa Galgani, a researcher at Florida Atlantic University, said.
“It’s that they can help each other get to the deep ocean.” 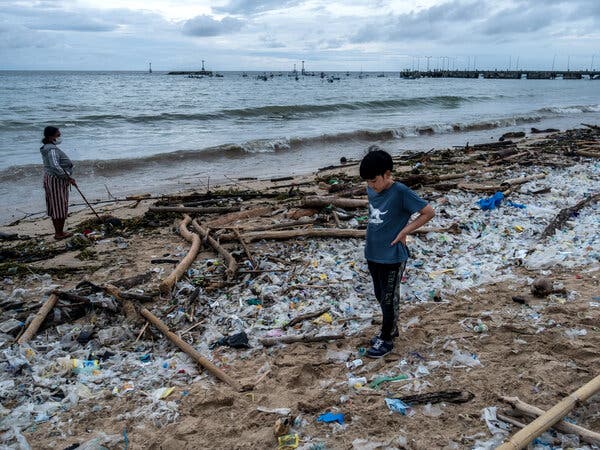 A sample of South Atlantic water containing plankton and microplastics.
Ocean plastics commonly develop a filmy “plastisphere” of distinct microbial communities.
Credit...Morgan Trimble/Alamy
Microplastics can host so many microbial hitchhikers that they counteract the natural buoyancy of the plastic, causing their raft to sink.
But if the biofilms then degrade on the way down, the plastic could float back up, potentially leading to a yo-yoing purgatory of microplastics in the water column.
Marine snow is anything but stable; as flakes free-fall into the abyss, they are constantly congealing and falling apart, rent by waves or predators.

“It’s not as simple as: Everything’s falling all the time,” said Adam Porter, a marine ecologist at the University of Exeter in England.
“It’s a black box in the middle of the ocean, because we can’t stay down there long enough to work out what’s going on.”

To explore how marine snow and plastics are distributed in the water column, Dr. Mincer has begun to sample deeper waters with a dishwasher-size pump full of filters that dangles on a wire from a research boat.
The filters are arranged from big mesh to small to filter out fish and plankton.
Running these pumps for 10 hours at a stretch has revealed nylon fibers and other microplastics distributed throughout the water column below the South Atlantic subtropical gyre.

But even with a research boat and its expensive and unwieldy equipment, an individual piece of marine snow is not easily retrieved from deep water in the actual ocean.
The pumps often disturb the snow and scatter fecal pellets.
And the flakes alone offer little insight into how fast some snows are sinking, which is vital to understanding how long the plastics linger, yo-yo or sink in the water column before settling on the seafloor.

“Is it decades?” Dr. Mincer asked.
“Is it hundreds of years? Then we can understand what we’re in here for, and what kind of problem this really is.” 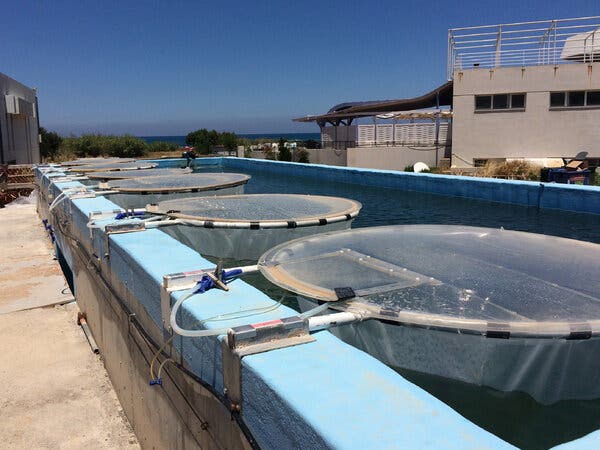 Experimental “mesocosms” created by the researcher Luisa Galgani and her team on the Greek island of Crete, to mimic and observe marine snow.
“In the mesocosm, you are manipulating a natural system,” she said.
Credit...Luisa Galgani, Chiara Esposito, Paraskevi Pitta
To answer these questions, and work within a budget, some scientists have made and manipulated their own marine snow in the lab.

In Exeter, Dr. Porter collected buckets of seawater from a nearby estuary and loaded the water into continuously rolling bottles.
He then sprinkled in microplastics, including polyethylene beads and polypropylene fibers.
The constant churning, and a squirt of sticky hyaluronic acid, encouraged particles to collide and stick together into snow.

“We obviously don’t have 300 meters of a tube to make it sink,” Dr. Porter said.
“By rolling it, what you’re doing is you’re creating a never-ending water column for the particles to fall through.” 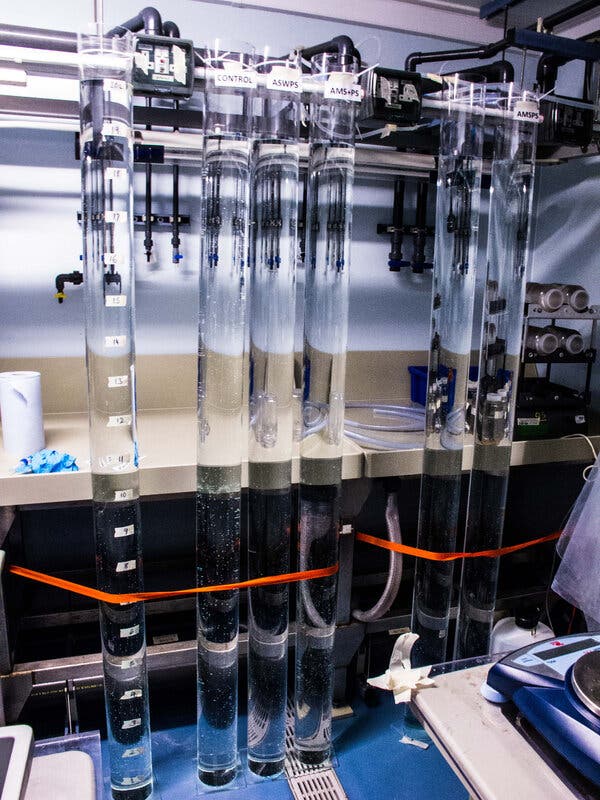 Tubes of marine snow in the lab of Adam Porter at the University of Exeter in England.
“It’s not as simple as: Everything’s falling all the time,” Dr. Porter said.
Credit...Adam Porter

Dr. Porter suggested that this potential change of the speed of the snow could have vast implications for how the ocean captures and stores carbon: Faster snowfalls could store more microplastics in the deep ocean, whereas slower snowfalls could make the plastic-laden particles more available to predators, potentially starving food webs deeper down.
“The plastics are a diet pill for these animals,” said Karin Kvale, a carbon cycle scientist at GNS Science in New Zealand.

In experiments in Crete, with funding from the European Union’s Horizon 2020 research program, Dr.
Galgani has tried mimicking marine snow on a larger scale.
She dropped six mesocosms — huge bags that each contained nearly 800 gallons of seawater and recreated natural water movement — in a large pool.
Under these conditions, marine snow formed.
“In the field, you mostly make observations,” Dr. Galgani said.
“You have so little space and a limited system. In the mesocosm, you are manipulating a natural system.”

Dr. Galgani mixed microplastics into three mesocosms in an attempt to “recreate a sea and maybe a future ocean where you can have a high concentration of plastic,” she said.
The mesocosms laden with microplastics produced not just more marine snow but also more organic carbon, as the plastics offered more surfaces for microbes to colonize.
All this could seed the deep ocean with even more carbon and alter the ocean’s biological pump, which helps regulate the climate.

“Of course, it’s a very, very big picture,” Dr. Galgani said.
“But we have some signals that it can have an effect. Of course, it depends on how much plastic there is.” 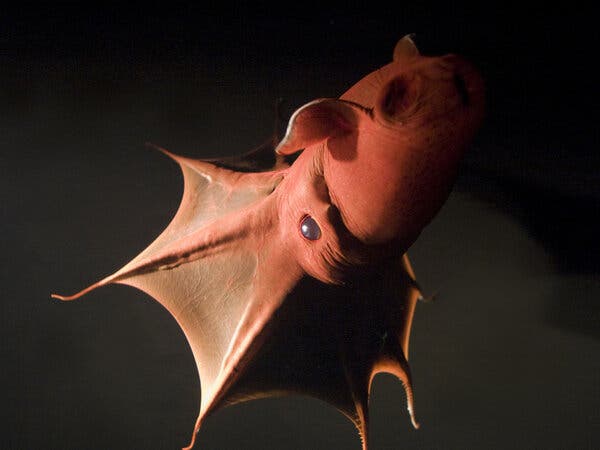 Vampire squids, which live in deep waters, were collected from a contaminated patch of the Atlantic Ocean and found to have alarmingly high levels of plastic in their stomachs.
Credit...Steve Downer/Science Source
To understand how microplastics might travel through deep-sea food webs, some scientists have turned to creatures for clues.

Every 24 hours, many species of marine organism embark on a synchronized migration up and down in the water column.
“They do the equivalent of a marathon every day and night,” Dr.Choy said.
Guilherme V.B.Ferreira, a researcher at the Rural Federal University of Pernambuco in Brazil, wondered: “Is it possible they are transporting the plastics up and down?”

Dr.Ferreira and Anne Justino, a doctoral student at the same university, collected vampire squids and midwater squids from a patch of the tropical Atlantic.
They found a plethora of plastics in both species: mostly fibers, but also fragments and beads.

This made sense for midwater squids, which migrate toward the surface at night to feed on fish and copepods that eat microplastics directly.
But vampire squids, which live in deeper waters with fewer microplastics, had even higher levels of plastic, as well as foam, in their stomachs.
The researchers hypothesize that the vampire squids’ primary diet of marine snow, especially meatier fecal pellets, may be funneling plastics into their bellies.

“It’s very concerning,” Ms.Justino said.Dr.Ferreira said: “They are one of the most vulnerable species for this anthropogenic influence.”

Ms.Justino has excavated fibers and beads from the digestive tracts of lanternfish, hatchetfish and other fish that migrate up and down in the mesopelagic, 650 to 3,300 feet down.
Some microbial communities that settle on microplastics can bioluminesce, drawing in fish like a lure, said Dr.Mincer.

In the Monterey Bay Canyon, Dr.Choy wanted to understand if certain species of filter feeders were ingesting microplastics and transporting them into food webs in deeper water.
“Marine snow is one of the major things that connects food webs across the ocean,” she said. 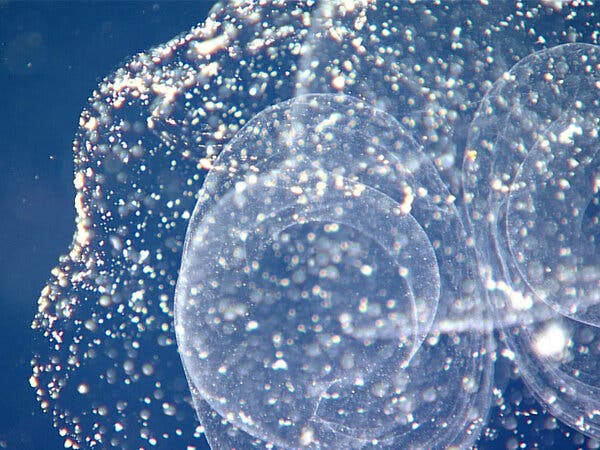 The large, mucusy house of a deep-sea larvacean.
When the larvaceans move out, their microplastic-laden houses sink into the deep.
Credit...NOAA Ocean Exploration
Dr. Choy zeroed in on the giant larvacean Bathochordaeus stygius.
The larvacean resembles a tiny tadpole and lives inside a palatial bubble of mucus that can reach up to a meter long.
“It’s worse than the grossest booger you’ve ever seen,” Dr. Choy said.
When their snot-houses become clogged from feeding, the larvaceans move out and the heavy bubbles sink.
Dr. Choy found that these palaces of mucus are crowded with microplastics, which are funneled to the deep along with all their carbon.
Giant larvaceans are found across the world’s oceans, but Dr. Choy emphasized that her work was focused on the Monterey Bay Canyon, which belongs to a network of marine protected areas and is not representative of other, more polluted seas.
“It’s one deep bay on one coast of one country,” Dr. Choy said.
“Scale up and think about how vast the ocean is, especially the deep water.”
Individual flakes of marine snow are small, but they add up.
A model created by Dr. Kvale estimated that in 2010, the world’s oceans produced 340 quadrillion aggregates of marine snow, which could transport as many as 463,000 tons of microplastics to the seafloor each year.
Scientists are still exploring exactly how this plastic snow is sinking, but they do know for sure, Dr.
Porter said, that “everything eventually sinks in the ocean.”
Vampire squids will live and die and eventually become marine snow.
But the microplastics that pass through them will remain, eventually settling on the seafloor in a stratigraphic layer that will mark our time on the planet long after humans are gone.
Links :
Posted by geogarage at 1:03 AM