The US Navy has created its first ever underwater drone squadron

From The Drive by Joseph Trevithick


The service expects to have fully operational units specifically for unmanned undersea missions by 2020.

The U.S. Navy has created its first ever dedicated underwater drone unit, Unmanned Undersea Vehicle Squadron One, or UUVRON 1, splitting it off from a secretive submarine unit in the process.
The decision highlights the steadily growing importance of unmanned craft within the service, which hopes to have dedicated operational unmanned undersea elements by the end of the decade, and across the U.S. military in general.

The Navy formally activated UUVRON 1 at a ceremony at the Naval Undersea Warfare Center in Keyport, Washington.
At the same time, the new organization replaced a smaller detachment that had been part of Submarine Development Squadron Five (DEVRON 5).
This unit still contains a variety of unique elements, including the USS Jimmy Carter spy sub, which recently returned from a shadowy, but apparently successful mission, as well as the Detachment Undersea Research and Development, which has been associated with those covert activities in the past.

“Today we are transitioning our UUV detachment into the first UUV squadron,” U.S.
Navy Captain Robert Gaucher, the outgoing head of DEVRON 5 said during the event.
“Why is this historical? It's because in standing up UUVRON 1, it shows our Navy's commitment to the future of unmanned systems and undersea combat.”

The previous Detachment Unmanned Undersea Vehicles was already a relatively young unit.
It only received its first underwater drone, a torpedo shaped vehicle known as a Large Training Vehicle 38, in August 2014. 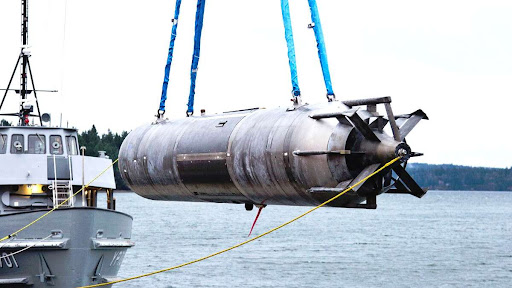 “This is certainly a key milestone,” U.S. Navy Lieutenant Brian Nuss, then the officer in charge of the detachment, said at the time.
“The future large-diameter vehicles will come in 2020 and in order for the detachment to fully prepare for the delivery of those vehicles we have to start with the tactics, training and procedures now to make it a successful program in the future.”

The implication here would be that, at least for a period, the Navy planned for UUVRON 1 to reach its full operational capability at some point in 2020.
It is possible that the service may be able to get the squadron fully up and running sooner, depending on how the state of the training pipeline to staff the necessary slots and what additional equipment it needs to acquire.

Another possibility is that UUVRON 1 will continue to focus on research and development and test evaluation, while the Navy works to establish operational unmanned undersea units.
It could be those organizations that the service expects to be ready to go by 2020.

Whatever the case, the capability is important and it’s a long time coming.
By 2020, the Navy will have spent two decades working on achieving the broad goals outlined in its unmanned undersea vehicle master plans. 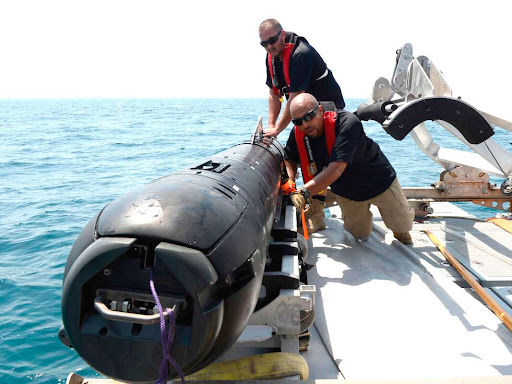 The service published the first of these white papers in 2000 and issued a new version in 2004.
Seven years later, Seapower Magazine reported there was another updated document, but that it was classified.
“We actually have action plans on all the missions we are trying to achieve,” U.S. Navy Rear Admiral Matthew Klunder, then the director of intelligence, surveillance and reconnaissance capabilities within the Navy’s Information Dominance unit, told Seapower about the new plan.
It “covers every spectrum,” from a military missions, such as mine hunting and surveillance, to humanitarian assistance and research roles.

It’s very likely that some of all of the missions in the 2011 roadmap were the same or similar to the nearly a dozen roles outlined in the 2004 document, which is publicly available.
Some of these were intelligence gathering, time critical strike, anti-mine warfare, anti-submarine warfare, communication relaying, and force protection against enemy special operations forces and combat divers and terrorists.
In addition, the Navy said it could be possible that a final unmanned undersea vehicle design could be modular, able to carry a number of payloads, including expendable weapons or remote sensors, depending on the needs of the mission. 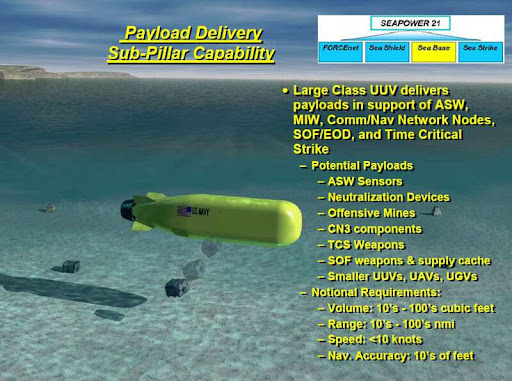 A graphic discussing possible underwater drone payloads from the US Navy's 2004 roadmap.

In a speech on Feb. 3, 2016, and in line with the so-called “Third Offset” strategy to stay technologically ahead of potential enemies, then Secretary of Defense Secretary Ashton Carter said the U.S. military as a whole would be investing $600 million in a variety of unmanned undersea systems.
It’s “a new capability you’ll be seeing a lot more of” and would be part of larger plans for “making our ships and aircraft work together in ways that they haven’t before but technology makes possible,” he told sailors during the event in San Diego, California.

This suggested a significant increase over the Navy’s budgeting at the time.
In the fiscal year 2016 budget proposal, the service asked for just shy of $5 million for various undersea drone projects, less than five percent of the annual expenditure Carter was suggesting.

At present, the majority of the Navy’s existing underwater drones fall into one of two categories, either being focused on mine hunting or employed in oceanographic mapping and research roles.
In a bizarre episode in December 2016, members of China’s People’s Liberation Army Navy (PLAN) snatched one of the latter vehicles, commonly known as gliders, out of the water in the South China Sea, before unceremoniously returning it days later.


Underwater glider research is currently underway in the physics department at the naval postgraduate in Monterey Ca.
Dr. Kevin Smith is a specialist in underwater acoustics and sonar systems.
He and his team are currently focused on autonomous underwater gliders and developing systems capable of detecting parameters in the ocean and listening for various sources of sound.

The benefits in both of these cases are relatively clear cut.
Gliders can help gather information about the ocean and sea floor faster and cheaper than sailing a large research vessel along the same routes.
It is possible that they may be able to get into areas that would be too shallow or narrow for a larger ship, as well.
They are far more persistent than a manned vessel as well, allowing for collection of data over a far larger timeframe.

When it comes to mines, on land or at sea, using a remote sensor of some kind to identify an object help keeps personnel away from danger.
A drone can move in very close to an object to examine it with relatively little risk and possibly disarm it without having to send out a specialized team.
All of this helps commanders maneuver safely through potentially contested and congested waterways.
Naval mines, including improvised ones that non-state actors are crafting, are a serious threat to both commercial shipping and naval vessels. 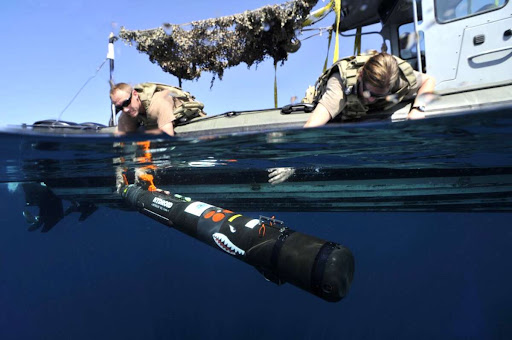 Not surprisingly, UUVRON 1 is slated to receive the first experimental LDUUV.
There are also future plans for extra large systems that could operate as either a remote controlled or autonomous mini-submarine or even have the ability to be optionally manned if need be.
In 2015, a team of Huntington Ingalls Underwater Solutions Group, Bluefin Robotics, and Battelle demonstrated on such vehicle Proteus.
The next year, Boeing showed off the huge Echo Voyager, claiming it could operation underwater for up to six months.

There's no real definitive idea of what these vehicles might look like in the end, those most of the notional concepts are shaped like little subs.
In 2014, though, the U.S. Navy showed off a underwater drone that looked and moved like a shark.

As of earlier in 2017, the Office of Naval Research was working on an unmanned flying craft that could hit the water and then turn into a subsurface vehicle, though purely as a proof of concept.
A number of private companies are also working on similar convertible water craft that are both manned and unmanned. 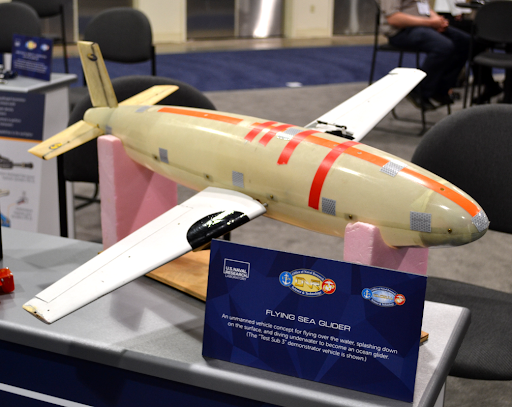 
Whatever it looks like, the Navy’s initial goal for the final Snakehead is a design that can conduct a variety of intelligence, surveillance, and reconnaissance functions.
This could include gathering intelligence on enemy ships or facilities ashore, patrolling waterways for items of interest, or gathering information about a body of water, beach, or other landing side ahead of an attack naval or amphibious operation.

Again, the benefit of a using a drone for these functions it that it offers a lower cost and reduced risk option, especially when attempting to gather information about heavily defended or otherwise restricted areas.
With regards to unmanned undersea vehicles, it also reduces the burden on larger submarines, allowing them to focus on higher priority missions that requirement their more expansive intelligence gathering and weapon systems.

The option to use a unmanned vehicle for these jobs will likely only become more important in the coming years, as well.
Though we at The War Zone more often talk about concepts such as “anti-access and area denial” in terms of integrated air defense networks, many of the U.S. military’s potential opponents are exploring similar arrangements at sea.

In May 2017, the People's Liberation Army Navy (PLAN) said it was beginning construction of an expansive sensor net in the South China Sea for “environmental” purposes.
Of course, these nodes could just as easily end up configured to keep watch for submarines and in a conflict, it would be especially useful to be able to find the exact locations of the nodes and attempt to size up their capabilities without risking detection in a manned boat in the process.


The Navy takes a trip under the sea to test its newly developed Common Control System (CCS) with a submersible unmanned vehicle at the Naval Undersea Warfare Center Keyport in Puget Sound, Washington.
Learn how data collected from this series of successful underwater missions will help operators eliminate redundant efforts and reduce cost when operating unmanned vehicles in sea, land or air.

Further versions of Snakehead could carry actual weapons or electronic warfare payloads, to disable underwater sensors and mines or attack other undersea vessels, surface ships, or targets on land, depending on the final configuration.
Though not mentioned specifically, it is possible that multiple LDUUVs could operate as a single swarm to confuse, distract, or overwhelm enemy defenses, or operate in combination with small underwater drones for that purpose.
Networked together and connected to manned submarines, surface ships, or even aircraft, one or more of these unmanned underwater craft could just extend the situational awareness for the whole group along a broad front.

“I can think of so many missions that unmanned systems can help out,” U.S. Navy Rear Admiral Robert Girrier, then Director of Unmanned Warfare Systems within the Navy’s top Unmanned Systems Office, said during a talk at the Center for Strategic and International Studies in February 2016.
Citing a desire for unmanned systems to be more of an integral part of operations in general, U.S. Navy Rear Admiral Mike Manazir, then Deputy Chief of Naval Operations for Warfare Systems, shut down the office, also known as N99, in January 2017.

Exactly what sort of systems and tactics will work or not is likely to be UUVRON 1’s primary concern regardless of whether it is considered an operational or trials unit.
If the Navy sticks to its existing plans, we should start seeing some clues about what conclusions they’ve arrived at in the next few years.