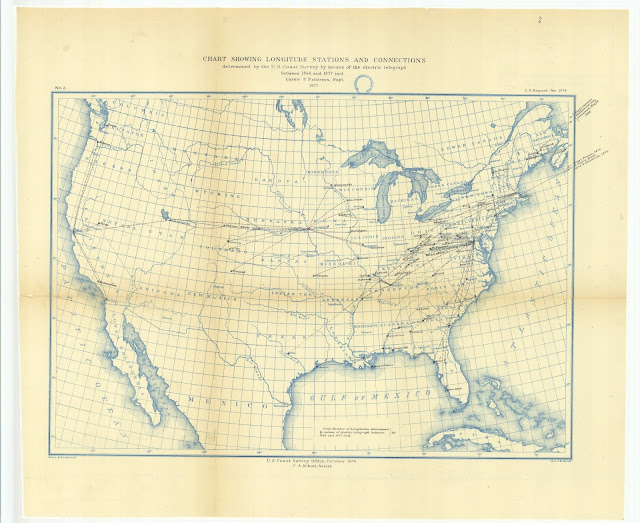 On this day in 1844, the first news dispatch telegraph was sent from Washington D.C. to Baltimore. Coast Survey shortly after adapted this technology to provide more accurate longitude measurements.
The development of wireless telegraph time signals in the early 20th century, used in combination with marine chronometers, put a final end to the use of lunar distance tables.
This chart shows the connections established over the next few decades.
Year : 1878 / publisher : US Coast Survey


From Politico by Andrew Glass

On May 25th, 1844, Samuel Morse first successfully transmitted word of a House vote from the U.S. Capitol to a newspaper via telegraph.
The initial dispatch on Morse’s invention ushered in a new era of up-to-the-minute congressional reporting.
The day before, Morse (1791-1872) opened the world’s first telegraph line, sending a message to his partner in Baltimore from the old Supreme Court chamber in the Capitol.
Annie Ellsworth, the young daughter of Morse’s friend, had chosen the words of the message — “What hath God wrought?” — from the biblical Book of Numbers.
Using Morse code — a system that assigned a set of dots and dashes to each letter of the English alphabet — the inventor tapped out word to the Baltimore Patriot that the House had voted to reject a proposal that it sit as a Committee of the Whole to debate the formation of a territorial government in Oregon.
Morse subsequently began selling reports on congressional business to the Baltimore American for a penny a word.
News outlets outside Washington, which heretofore had relied on days-old accounts prepared by “letter writers” in the congressional galleries, marveled at their newfound access to near-instant communication.
“Space is annihilated,” gushed the Niles Weekly Register, a Baltimore magazine.
“By the time the result of the vote of Congress is announced by the speaker in the Capitol, it is known at the Pratt Street Depot in the city of Baltimore!”

Through private funding, Morse soon extended telegraph service to Philadelphia and New York, acquiring more news clients.
Meanwhile, small telegraph companies started to connect many cities east of the Mississippi.
The practice of dispatching trains by telegraph began in 1851, the same year Western Union was founded.
Western Union built its first transcontinental telegraph line in 1861, mostly along railroad rights of way.
By 1866, a telegraph line had been laid across the Atlantic Ocean bed from the United States to Europe.
Subsequent improvements included the development of good insulation for telegraph wires.
The man behind this innovation was Ezra Cornell (1807-74), one of the founders of the university in New York state that bears his name.
Another improvement, by Thomas Alva Edison (1847-1931) in 1874, was the Quadruplex system, which allowed for four messages to be transmitted simultaneously using the same wire.
Although the telegraph has fallen out of widespread use in the 21st century — replaced by telephones, fax machines and the internet — it laid the groundwork for the communications revolution that led to these innovations.