Turkey has begun a defacto blockade of Russian naval vessels, preventing transit through the Dardanelles and the Strait of Bosporus, between the Black Sea and Mediterranean.
According to the AIS tracking system for the movement of maritime vessels, only Turkish vessels are moving along the Bosphorus, and in the Dardanelles there is no movement of any shipping at all.
At the same time, both from the Black Sea, and from the Mediterranean Sea, there is a small cluster of ships under the Russian flag, just sitting and waiting.
- courtesy of MarineTraffic -

From The Daily Caller

Turkey slammed the door on Russian sea travel Sunday, effectively shutting off Moscow’s access to the Black Sea and raising serious concerns among experts about escalating tensions in the region.
The recent blockade is preventing Russian naval vessels from traveling in the Black Sea to Syria.
The Russian Black Sea fleet has been a key component to Russian operations in the war-torn country, primarily operating out of the Syrian port of Tartus.
Without access to the Turkish Straits, Russian attempts to increase force projection in Syria or resupply the units in the country will be extremely limited.
“This better be a joke — because if not, WW3 is about to start,” quipped John Schindler, former NSA operative and national security columnist at the Observer.

'Yauza', a logistics ship of the Russian Navy passes through the Dardanelles
in front of a Turkish submarine on Nov. 30
(see video)

Schindler’s concern is certainly warranted.
The conflict between Russia and Turkey adds fuel to the raging fire that is Syria.
As a NATO member, Turkey is party to Article 5 of the NATO convention which considers an attack on any of the NATO allies an attack on them all, including the United States.
NATO has shown support for Turkey throughout the incident and the issue will certainly be brought up as Turkish President Ahmet Davutoglu visits NATO General Secretary Jens Stoltenberg today.


The blockade is the most recent counter in the standoff between the Turkish and Russian governments that was sparked by the downing of a Russian Su-24 bomber by Turkish forces last week.
In response, Russian President Vladimir Putin announced Saturday that Russia would begin sanctions against certain Turkish exports as well as a halt to charter flights between the two countries. Additionally, Russia armed its fighter aircraft with air-to-air missiles for the first time Monday, giving them an offensive capability against any future aggression by Turkish aircraft.
“The egos of Putin and Erdogan may spin any future incident beyond control,” Boris Zilberman, a Russia expert at the Foundation for Defense of Democracies, a D.C.-based think tank, told Business Insider. 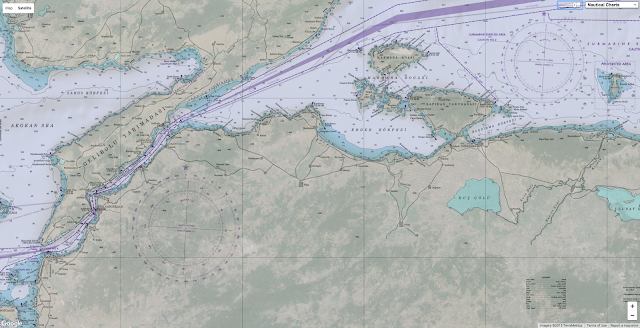 Dardanelles Straight with the GeoGarage platform (NGA chart)
It is a 1936 agreement that gives Turkey control over the Bosporus Straits and the Dardanellesand regulates the transit of naval warships.
The Convention gives Turkey full control over the Straits and guarantees the free passage of civilian vessels in peacetime.
It restricts the passage of naval ships not belonging to Black Sea states.
The terms of the convention have been the source of controversy over the years, most notably concerning the Soviet Union's military access to the Mediterranean Sea.

As the only direct Russian access point to the Mediterranean, the effects of the Turkish blockade pose both economic and military concerns for Russia.
Turkey is Russia’s second largest trade partner, while the Turkish Straits (the Bosporus and Dardanelles) are a primary shipping lane for Russian oil exports.
Any potential deployment of Russian ground forces to Syria would be significantly hampered by the blockade, along with the resupply of the current Russian forces based in Syria.
The blockade is not the first instance of conflict between Russia and Turkey over access to the Straits. In the early years after World War II, Turkey was pressured by the then Soviet Union to allow unfettered Soviet access to the Straits.
Tensions between the two countries eventually led to Turkey joining NATO in 1952, thus giving the country protection from the United States.
The access dispute has never been formally settled.