Shift in MH370 search points to revision of assumptions 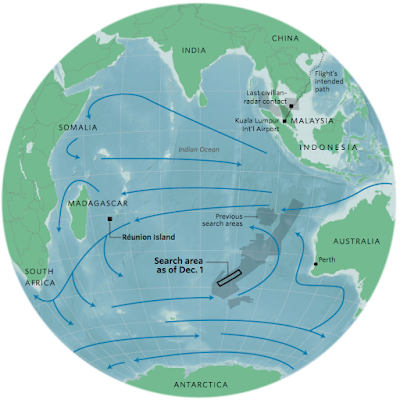 
From WSJ by Andy Pasztor

The decision to revise the search area yet again for the wreckage of Malaysian Airlines Flight 370 reflects a reassessment of some basic assumptions directing the effort for the past year.

By shifting search locations, Australian authorities seemingly have concluded the Boeing Co. 777 carrying 239 people most likely followed a straight rather than a curved course during the last few hours before it mysteriously disappeared March 8, 2014, according to independent analysts who have been regularly updated on the investigation.

The new assessment also differs from earlier ones by noting that one of the plane’s two engines likely continued to run some 10 minutes longer than previously believed, which could change earlier assumptions about the plane’s speed and other variables.
The updated theory also assumes the jet reached the water in a tighter twisting dive than an international team of experts initially thought.

But even as Australian authorities released detailed, technical explanations for the shifts, some independent experts who advocated many of the same changes expressed growing skepticism that remnants of the jet would be found anytime soon.
They increasingly worry that search equipment limitations, combined with rugged underwater topography, may result in teams overlooking parts of the plane even if they are looking in the right areas.
“It’s still a difficult task, and it’s easy to miss things” that may be lying at depths of 6,000 feet or more, according to Tim Farrar, a satellite-industry consultant who participated in the independent analysis.
“I wouldn’t say there is a high probability of finding it even by next June.”

Searchers have been combing the Indian Ocean since last year

The Australian Transport Safety Bureau is now focused on high-priority search areas that essentially coincide with those outlined more than a year ago by the nongovernmental group of experts, including Mr. Farrar.

Flight 370 veered sharply off course while on a scheduled flight from Kuala Lumpur to Beijing. The plane was picked up briefly on local radar screens before experts are convinced it disappeared over the southern Indian Ocean. 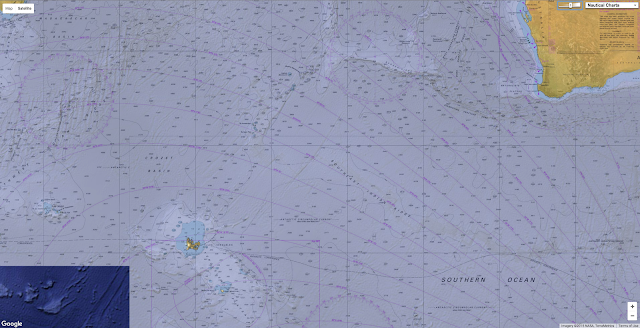 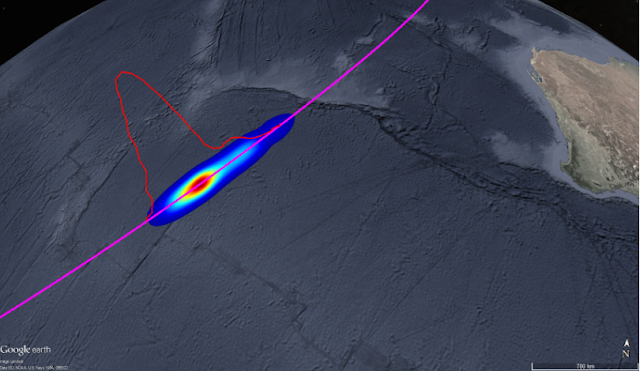 Map showing MH370 search area.
Based on the most recent expert analysis, the purple box (length : 700 km) is the area of highest priority and within that area is a heat map showing the area of greatest likelihood in red.
ATSB

Michael Exner, a satellite-industry entrepreneur who has spearheaded the independent review, agreed with the decision to adjust the search area, but said he took issue with some of the reasoning behind the analytical models that led to the decision.
“There really is no new data, and there are no revelations,” he said.

Assumptions about speed, altitude and fuel consumption underpin calculations of the most promising search areas, with material released by the ATSB suggesting that those parameters remain largely unchanged for most of the flight.

Rather, Australian defense experts have used sophisticated, computer-driven probability tools to sketch out a presumed flight more in line with past simulator sessions of the plane’s potential flight path, Mr. Exner added.

The refined trajectories are less dependent on precisely matching periodic satellite-communications data, according to Messrs. Exner and Farrar.

The shift adds some 8,000 square miles of ocean floor to the search zone—an area roughly the size of the state of Vermont—and casts doubt on areas previously scoured by a fleet of ships as part of an expensive underwater search mission that has spanned more than 13 months.

Note: Debris may come from different side of plane than pictured.

The only debris found from the missing aircraft was a small wing part known as a flaperon that in July was found washed ashore on the Indian Ocean island of Réunion.
Experts believe the wing part was carried by strong ocean currents thousands of kilometers west from the search zone off the coast of Western Australia. French authorities are still analyzing the flaperon.

Moves to refocus the search have been under way for months, with Australian officials regularly updating Mr. Exner’s team on evolving analyses.

courtesy of The Telegraph

To cover all possible scenarios, the revised search area also reflects a refinement of how far the aircraft could have glided under active pilot control after both engines ran out of fuel.
That distance likely would have been about 120 miles, according to the report released Thursday.

But at another point, the document includes the most definitive official statement by crash investigators so far that they are convinced nobody was manipulating aircraft controls during the final phases of the flight.
“There is no evidence to suggest that the aircraft was under controlled flight,” according to the ATSB.

In a move that could expedite the hunt for wreckage, Australian experts reduced the width of highest-priority search zones by more than 10 miles on the grounds that simulator sessions indicated that was the most accurate parameter to use.