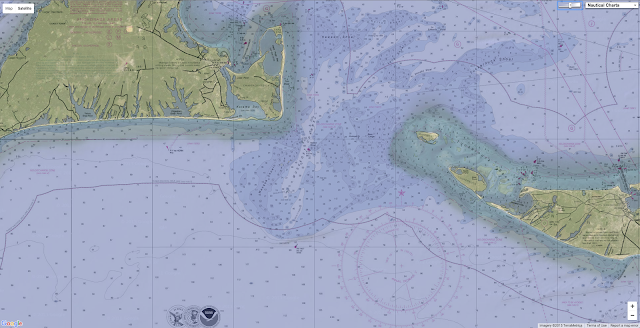 Mutton shoal in the GeoGarage

From NOAA by Ensign Kaitlyn Seberger

Nautical charts are an important tool in navigating safely in coastal waters, and Coast Survey’s mission is to keep these charts up to date.
However, maintaining accurate charts can be a challenge in locations where sandy shoals may shift seasonally and present a danger to navigation.
These areas differ from the current nautical charts, and bottom contours change so rapidly that it may seem an impossible task to keep up using the traditional survey methods.
Office of Coast Survey and NOAA Ship Thomas Jefferson are seeking a solution to this ongoing problem and may have an answer with satellite-derived bathymetry.

Multi-spectral satellite imagery of Mutton Shoal in Nantucket Sound, overlaid on the chart.

Green color bands are attenuated by the water faster than blue bands and help to infer relative depths of the water (blue areas being deeper than green).
These images are then transformed into a color range scale applicable to the color scale used when surveying with a multibeam echo sounder.
With the color range applied, reds on the image represent an area that may be shoal whereas blues and greens represent deeper water.

Satellite-derived bathymetry of Mutton Shoal with a color range scale that is correlated with the color scale used for multibeam processing.

Since the images are based on attenuation of color bands, depth can only be inferred, so survey equipment (such as vertical beam and multibeam sonars) is necessary to acquire true depth.

This fall, NOAA Ship Thomas Jefferson investigated the use of satellite-derived bathymetry imagery as a new survey tool.
Survey technicians will calibrate the application of this imagery through bathymetry studies for Nantucket Sound and Chincoteague Island.
NOAA Lt. Anthony Klemm, who is leading the studies, chose these project areas because they both had relatively clear shallow water and were in a highly changeable area.
At these locations, he chose specific shoals for exploration based on vessel traffic density.

In October, Thomas Jefferson spent two days in Nantucket Sound researching shifting shoals using the satellite-derived imagery overlain on the most recent chart.
Ensign Marybeth Head developed line plans to acquire data over the potential location of shoals as seen with the satellite images, as well as their charted locations.
Survey launches acquired multibeam data in water deeper than six feet, and Z-Boats were sent in to acquire vertical beam data in areas too shoal for the launches to safely operate.

Satellite-derived bathymetry of Mutton Shoal with multibeam data from the investigation overlaid. This picture demonstrates how accurate the location of the shifted shoal was compared to the SDB imagery.

During routine conductivity, temperature, and depth casts for sound speed velocity, Ensign Head and Ensign Kaitlyn Seberger used a Secchi disk to determine the attenuation coefficient at each cast location for later comparisons.

The satellite imagery was a vital tool in project planning, as well as determining safe navigation of the ship and the survey launches.
Below is a picture of the chart location where Thomas Jefferson intended to anchor.
The adjacent image is the satellite-derived bathymetry imagery indicating the anchorage would have been within a shoal area and unsafe for anchoring. 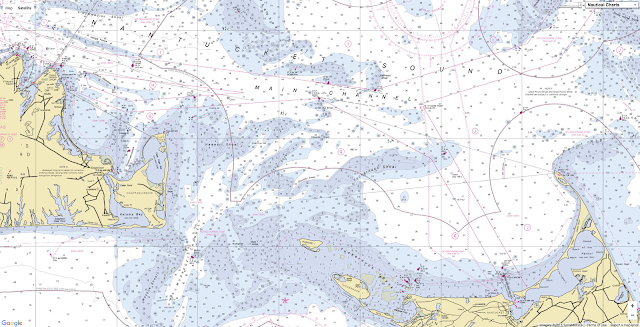 Long Shoal in the GeoGarage

Side-by-side picture of the chart and SDB imagery for the intended anchorage location in Nantucket Sound.
SDB imagery indicated a shoal that covered half of the anchorage safety circle.
A Z-boat verified the indicated shoal was almost 30 ft shoaler than charted and without this useful imagery, the ship and launches could have run aground.

Ensign Head determined safe passage routes for the survey launches, using the satellite-derived bathymetry imagery overlaid on a chart of the area, as the charted soundings were not reliable.
For example, a safe passage route between the study areas and the ship was located between two shoals that had shifted considerably from the chart of the area.
Sections of the passage are currently charted at 20 feet or more of water, but the fathometer on the launch displayed depths of less than 10 feet.

Boat sheet for the launches indicating a potential safe passage route
from the project area to the ship.

After processing the multibeam data, Ensign Head determined that more than half of the charted shoals in the project area had shifted and the red zones depicted in the satellite-derived bathymetry imagery were significantly shoaler than charted depths for the surrounding area.
Results from the investigation showed that the satellite-derived bathymetry for Nantucket Sound was exceptionally accurate and aided in the identification of current navigational dangers.

However, more research is needed regarding the use of satellite-derived bathymetry as a contemporary survey method.
Limitations on use of the imagery can include variables such as cloud cover, turbidity, Chlorophyll a, and other water quality properties that may affect attenuation.
Despite these challenges, satellite-derived bathymetry is a new tool that could support survey efforts by reducing the amount of time and area necessary to survey and by increasing the effectiveness of NOAA’s efforts to efficiently provide safe navigation to the local mariner.

Posted by geogarage at 5:38 PM