Living Esperanza from Gaston Lacombe
At Argentina's Esperanza base, in Antarctica, men and women share their lives with awesome landscapes, challenging weather conditions, and hundreds of thousands of penguins.
Beyond Antarctica's wildlife and glaciers, "Living Esperanza" explores the human dimension of life on this forbidding continent, from the deep philosophical thoughts that come from isolation, to mundane considerations such as food and housing.

From DailyMail by Mark Prigg

Thought everything was all white in Antarctica?
Photographer shows off stunning images of icy continent coloured by pink penguin poop and massive red and green blooms of algae
It is traditionally seen as a vast, white expanse of nothingness.
However, a Washington photographer who spent two month living in a remote base in Antarctica has revealed that in fact, the area can be surprisingly colourful.
Gaston Lacombe captured these incredible images showing the bright pinks, greens and reds of the area - caused by everything from penguin poo to massive blooms of algae. 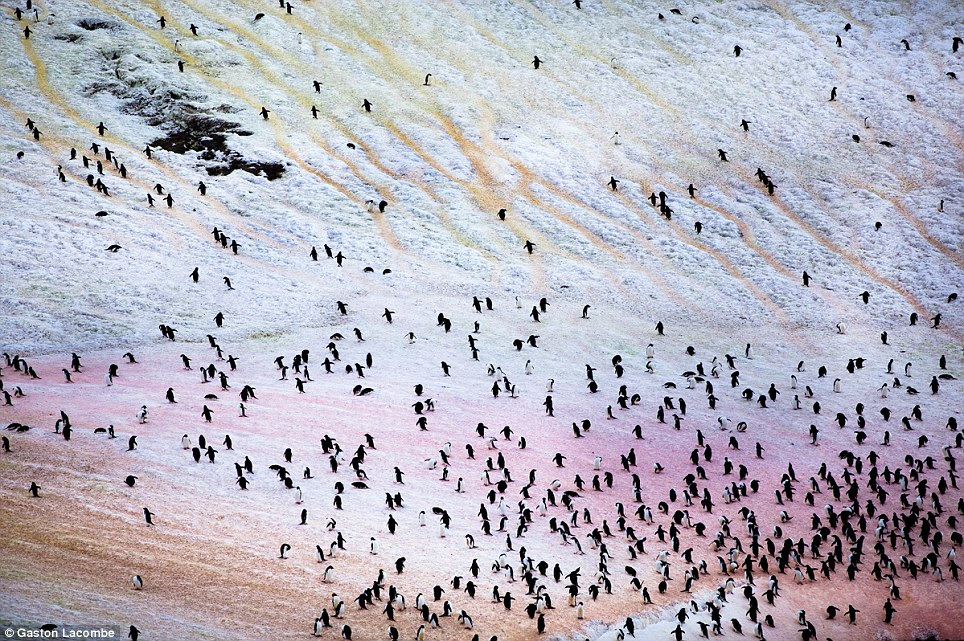 Adelie penguins transiting to and from the sea shore colour the surface of the snow with whatever substance they drag with their feet.
The pink color is from penguin poo, since they eat mostly krill, a small type of shrimp.

Gaston told MailOnline he was invited to the remote base by the Government of Argentina as its artist in residence.
A Canadian photographer now based in Washington, D.C., spent two months at Esperanza Base, a permanent research station on Antarctica’s Trinity Peninsula. 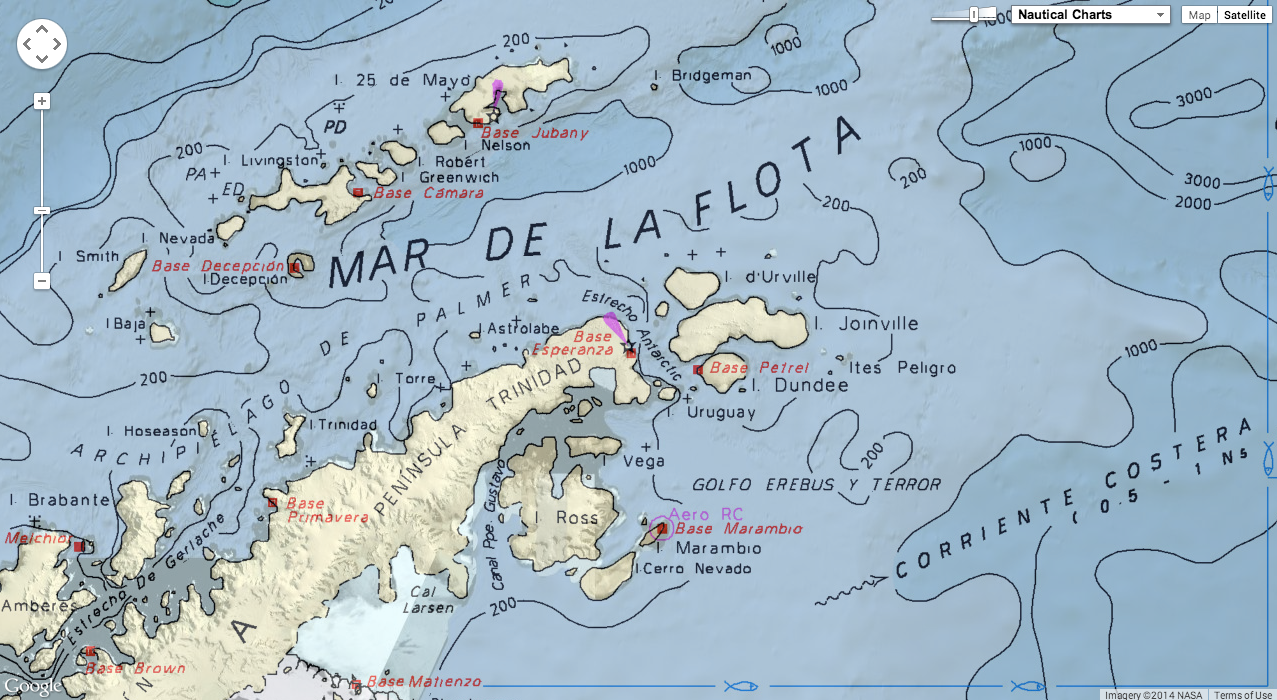 Esperanza Base with the Marine GeoGarage (SHN chart) 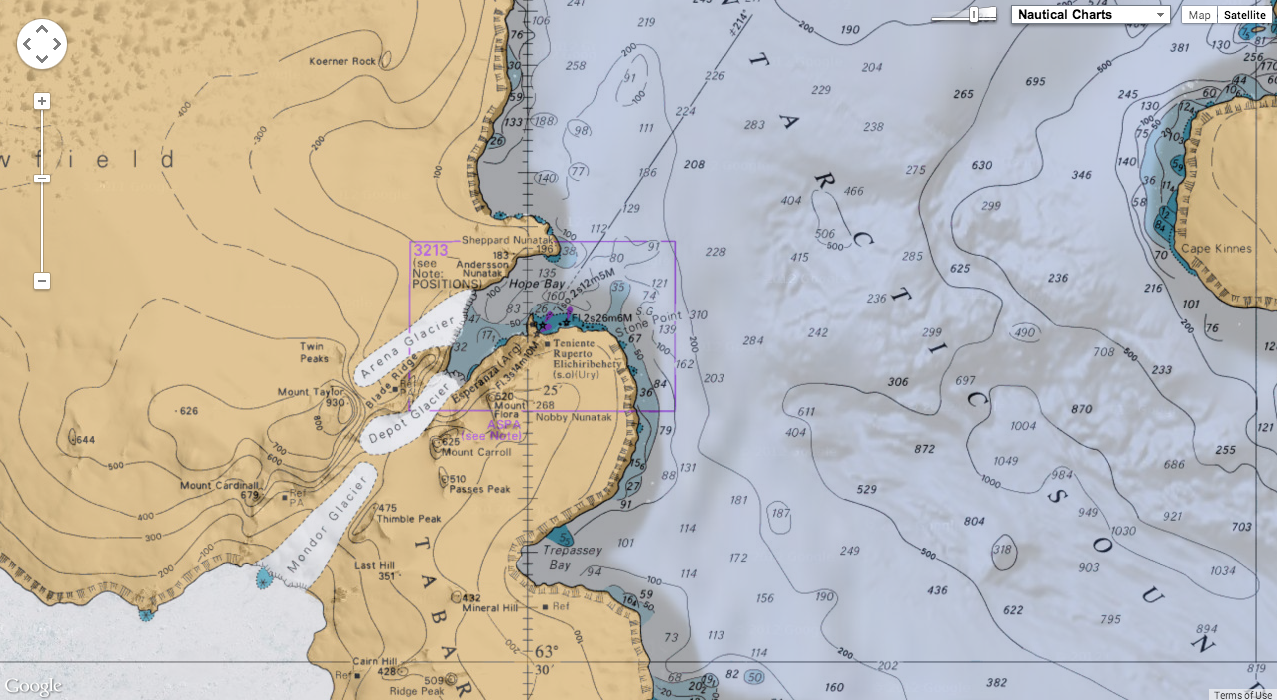 Esperanza Base with the Marine GeoGarage (UKHO chart)
'I'd done a lot of preparation to deal with a lot of white, empty bleak expanses,' he said. And when he first arrived, he admits his views didn't change.
'When I got there, the colours were at first hard to see.
'It took a few weeks before I saw beyond the icebergs and the ocean and look for new ways to see the area. Adelie penguins crossed a brightly colored patch of ice.
The color on the snow comes from dirt getting blown on (brown, black), from microscopic algae living in the snow (red, green), and from penguin poo (pink).


'These colours are very fleeting  - they can be there for just a few hours, conditions change very rapidly.
'It can be white in the morning, but algae blooms can makes the glacier red - or wind bring dirt onto the ice, making them brown and orange,' he explained.
The main colouring agents were soil and dirt.
'There were areas around the base that thawed, and the mud was taken onto the ice.'
Algae also caused major changes.
'Algae that lives inside the snow and ice blooms when the sun comes out,' he said. 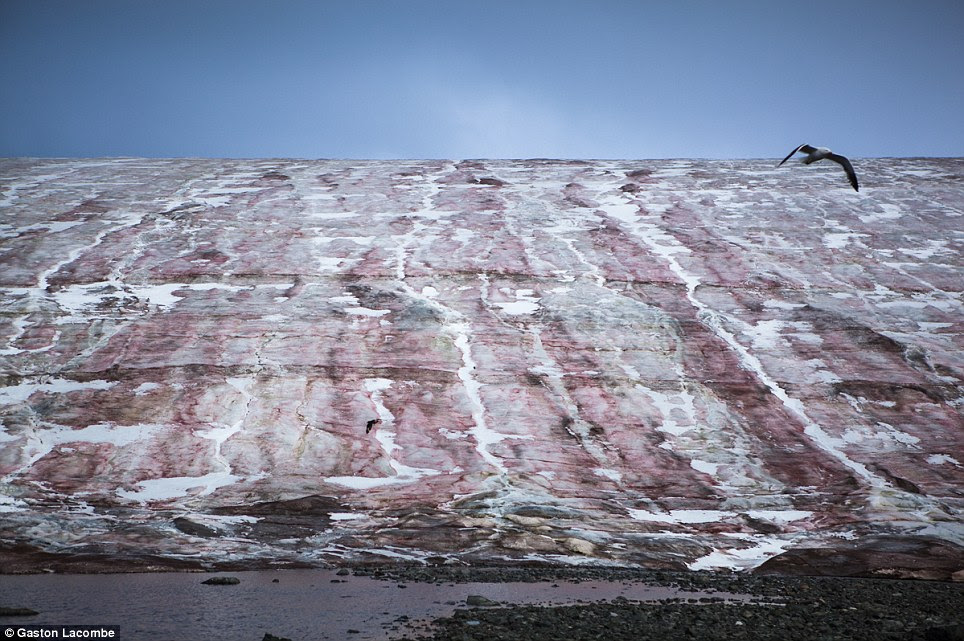 The surface of the Buenos Aires Glacier, next to the Esperanza Base, turns red i stripes from the bloom of a microscopic algae (Chlamydomonas nivalis). 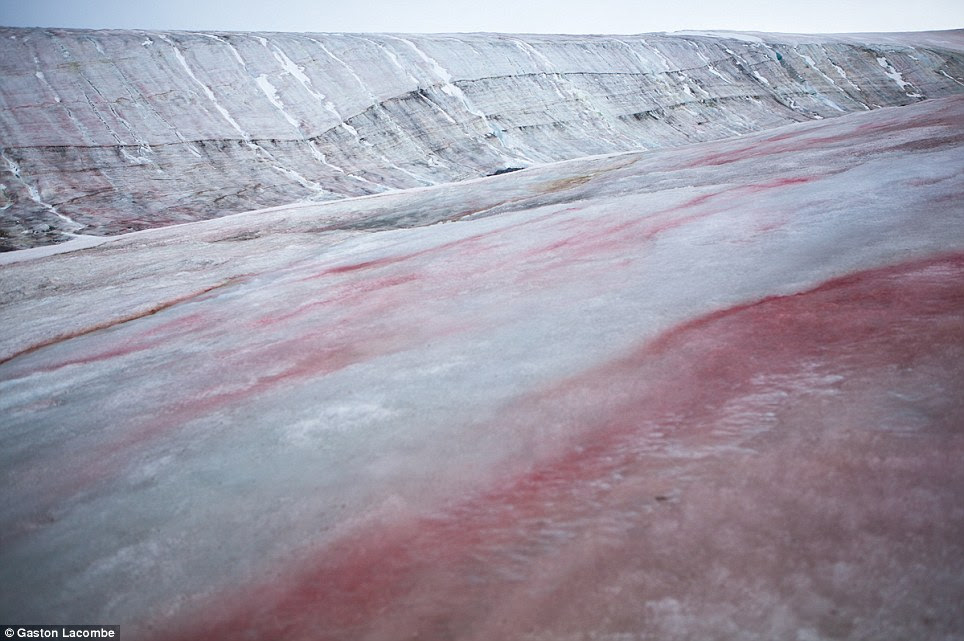 Algae bloom colors the surface of the ice around the Esperanza Base
When the microscopic algae Chlamydomonas nivalis is touched, its color amplifies as more of these minuscule organisms are compressed together.
'It's microscopic but there are so many green and red snow appears.'
The third colouring agent is the penguins.
'Most of it comes from their poo, they eat a lot of krill, so their poo is pink. That really surprised me,' he said.
'There were about 230,000 adelie penguins, they carry it on their feet - there are almost pink highways on the ice.
'I was very surprised when I started spotting these colours - a glacier near the base turned red in the space of an hour.
'The people here were military personnel, there to do a job - and they joked it was penguin poop, and I didn't believe them. 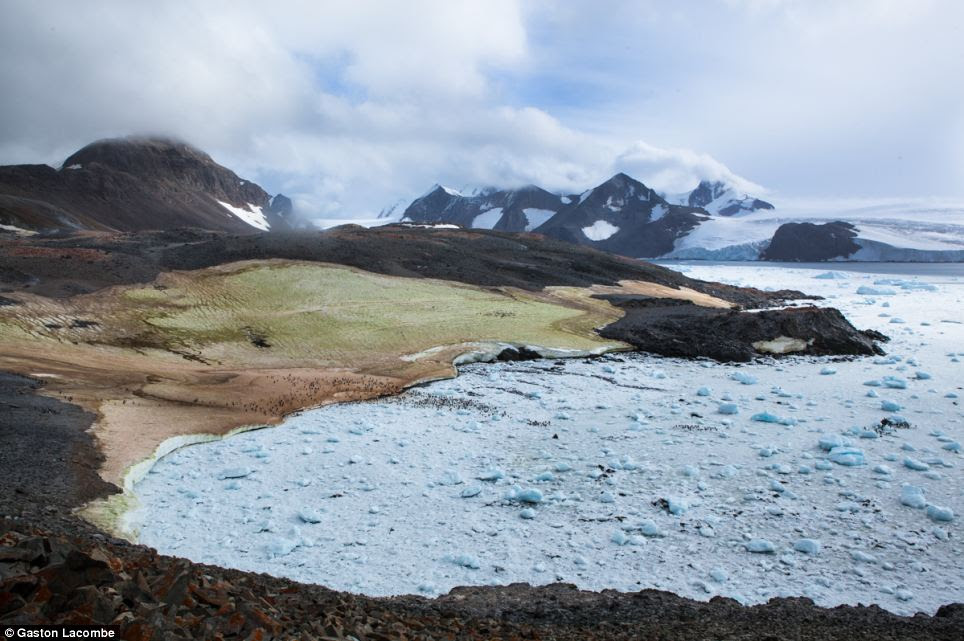 A wide view of the area behind the Esperanza base.
On this warmer day (upper 30s F), green algae was blooming on the surface on this ice patch, next to the pink of penguin poo also coloring the surface.
The sea was covered with blue ice blocks recently calved from the surrounding glaciers because of the summer heat. 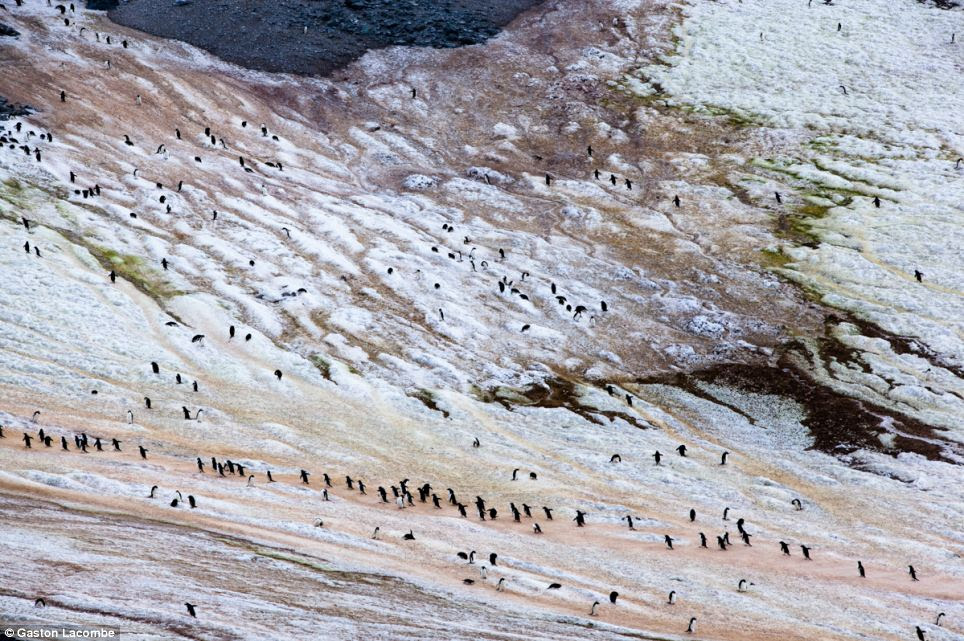 The surface of the snow and ice now near the Esperanza base is colored by microscopic algae, dirt and the shuffling of penguins. 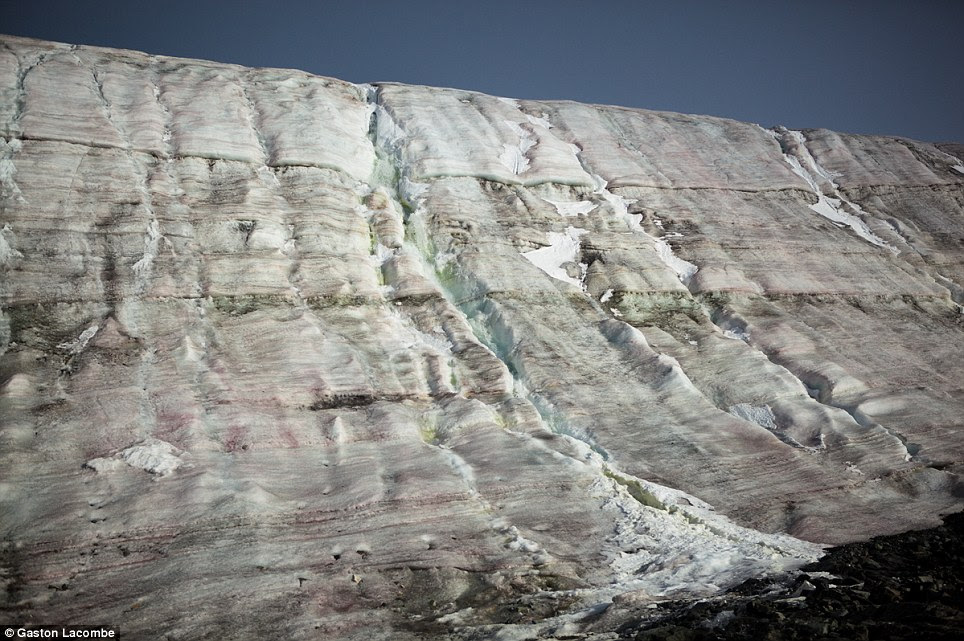 The edge of the Buenos Aired Glacier, near the Esperanza Base where photgrapher Gaston Lacombe lived. He said he first noticed the subtle colours of the area in this region. 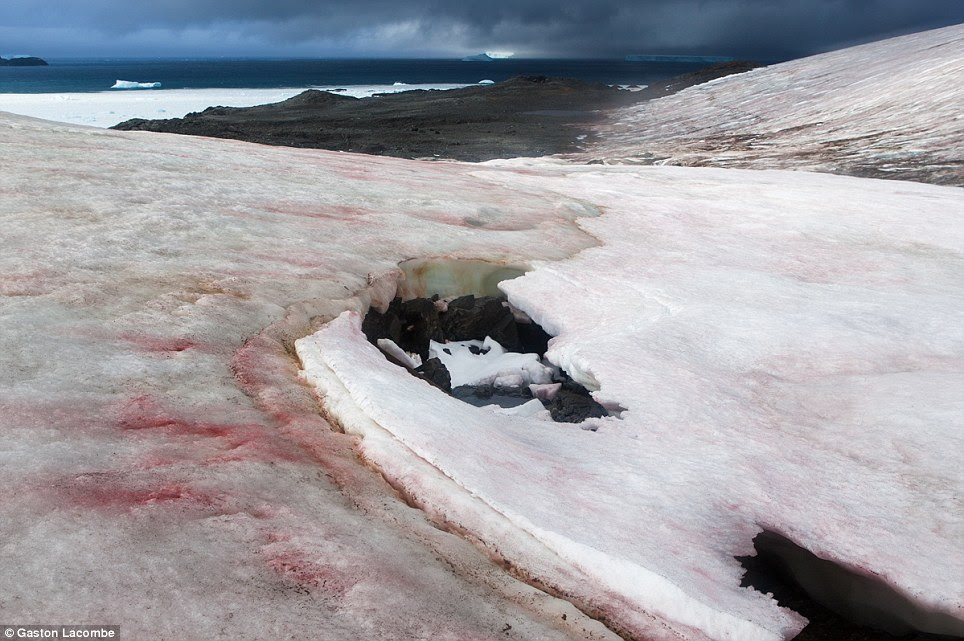 Algae bloom colours the surface of the ice around the Esperanza Base.
Taken over a two-month visit to the continent, the white is painted by brushes of algae, penguin poo and krill.
He told us how this hue magic happens. 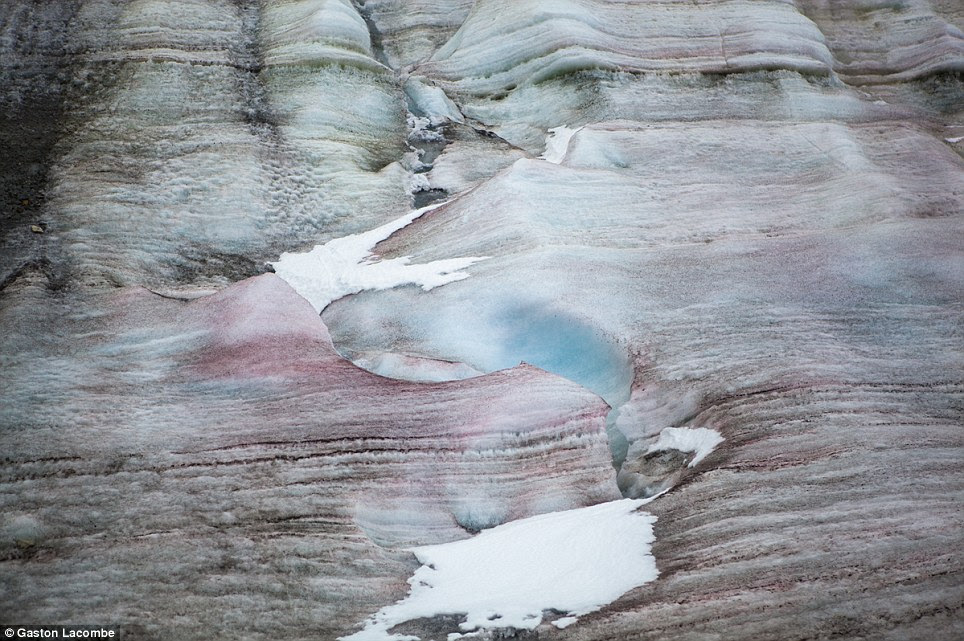 A detail of the edge of the Buenos Aires Glacier, near the Esperanza Base, colored with all kinds of subtle colors. 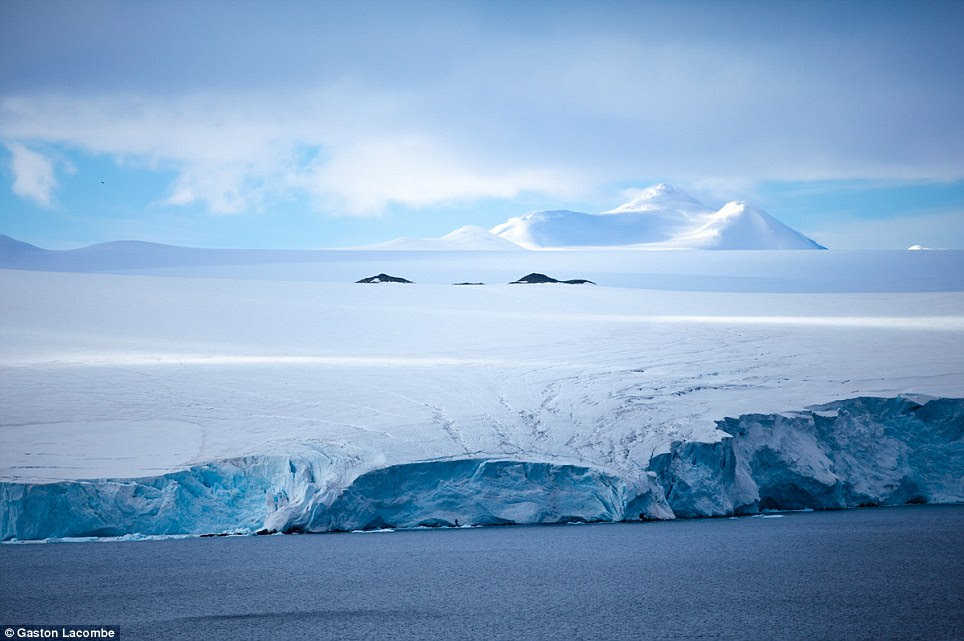 A stereotypical view of Antarctica as a white and barren landscape.
Posted by Peio at 1:45 AM