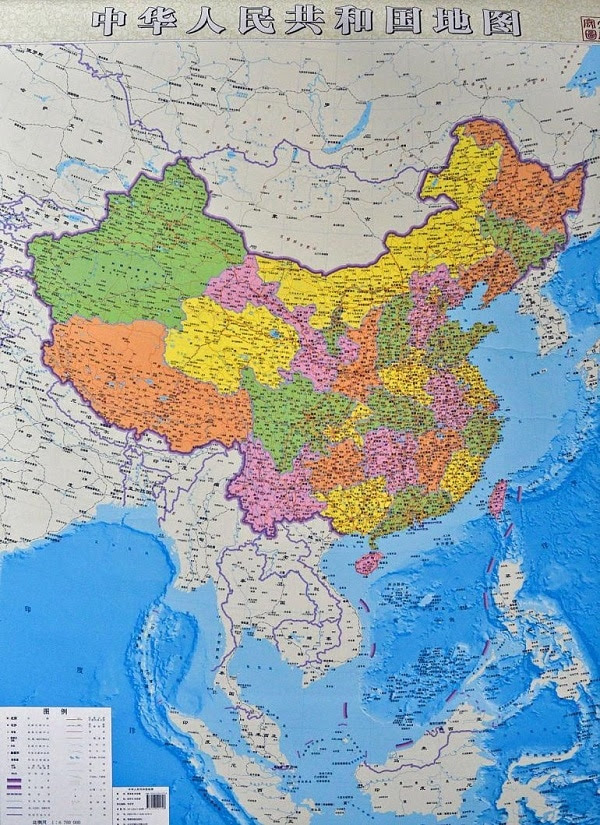 Could this map of China start a war?
Chinese authorities unveiled this week a new map showing the totality of Beijing's territorial claims.
It supplants an earlier map, which had a cutaway box displaying China's declared claims over the South China Sea.
The map, made by mapmakers affiliated with Hunan Map Press and the Hubei Bureau of Surveying, Mapping and Geo-Information, stretches from the northern tip of China to the southern tip of Borneo.
It’s the first map of China from an official organization to be stretched vertically to include all of the islands it claims in the South China Sea, the state-run Xinhua news agency said.
The maritime claims of China in the South China Sea has no “geographical coordinates” and is “moveable” unlike the previous boundary agreement between Indonesia and the Philippines.

China has published a new map of the entire country including the islands in the South China Sea (West Philippine Sea) in order to “better show” its territorial claim over the region.

The government-run Xinhua news agency of China published photos of the map made by Hunan Map Publishing House and said in the caption “Islands in South China Sea share the same scale with mainland and are better shown than traditional maps.”

The map shows China’s claim over the South China Sea by marking ten dash lines around the region just off the coasts of Vietnam, Malaysia, Brunei, and the Philippines’ islands of Palawan and Luzon.
China’s claim over the region, believed to be rich in oil and natural gas and a vital shipping route, has been challenged by the Philippines before the International Tribunal on the Law of the Sea (Itlos).
Several reclamation activities on reefs in the Spratly Islands are being conducted by China as shown by a series of aerial photographs of Mabini reef (Johnson South Reef) released by the Department of Foreign Affairs (DFA).

The reclamation is regarded as China’s way of furthering its “expansionist agenda” in the region, DFA secretary Albert del Rosario said in previous media interviews.
Supreme Court Associate Justice Antonio Carpio debunked China’s historical claims in public lectures saying that “There is not a single ancient map, whether made by Chinese or foreigners, showing that the Spratlys and Scarborough Shoal were ever part of Chinese territory.”
“China’s so-called historical facts to justify its nine-dash line are glaringly inconsistent with actual historical facts, based on China’s own historical maps, constitutions and official pronouncements,” Carpio said.
China remains in control of large parts of the South China Sea and Chinese maritime security vessels have repeatedly used water cannons to drive away Filipino fishermen from Scarborough Shoal and from areas in the Spratly Islands. 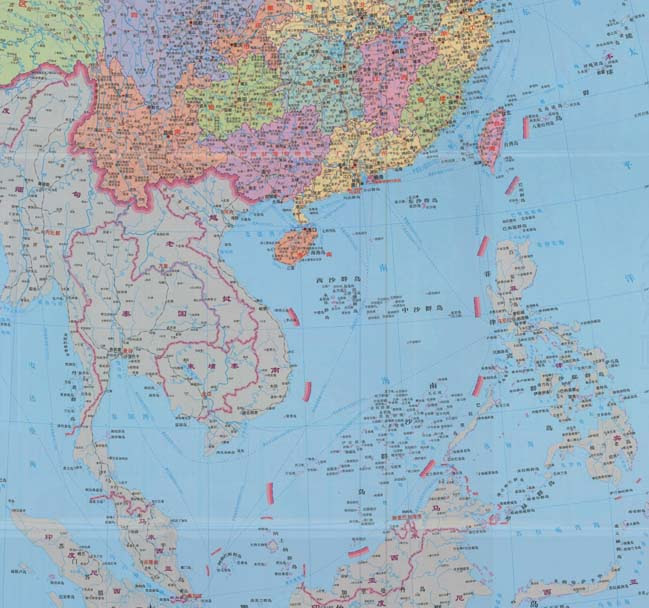 
The maritime claims of China in the South China Sea has no “geographical coordinates” and is “moveable” unlike the previous boundary agreement between Indonesia and the Philippines.
“China has never clarified its nine-dash line claims. What does it mean? Is it a claim to the waters or a claim to the land features?” Department of Foreign Affairs (DFA) spokesman Charles Jose said in a press conference Thursday when asked about the difference between China’s new map and the Indonesia-Philippines maritime boundary delimitation agreement.
“The nine-dash line is moveable; there are no geographical coordinates,” he said.
The Delimitation of the Exclusive Economic Zone (EEZ) Boundary agreement between the Philippines and Indonesia was signed last May 24, 2014 and indicates eight geographic coordinates in the Celebes Sea and Mindanao Sea to clearly mark the boundaries of both countries.

A map was jointly published by Indonesia and Philippines clearly indicating in straight lines the boundary of the EEZ of both countries.
It was also signed by both countries.
The agreement, which took two decades of negotiations between both countries, was regarded as a “model” for settling maritime border disputes by Indonesian President Susilo Bambang Yudhoyono.
China’s new map, which shows ten dash lines in a curved U-shape in the South China Sea and no geographic points, is regarded by Malacañang as just a “drawing” and that it does not have any bearing.
“No country in the world recognizes the nine-dash line claim of China,” Jose said.
The claim has also been previously challenged by Philippines before the International Tribunal on the Law of the Sea (Itlos) by filing an arbitration case. China has refused to participate in the proceedings and insists on bilateral talks citing their “indisputable sovereignty.”
China claims nearly the entire South China Sea including large portions of the Philippines 200 nautical mile EEZ citing “historical facts”.