Image of the week : the London array, the world’s largest wind farm just planted off of the mouth of the River Thames 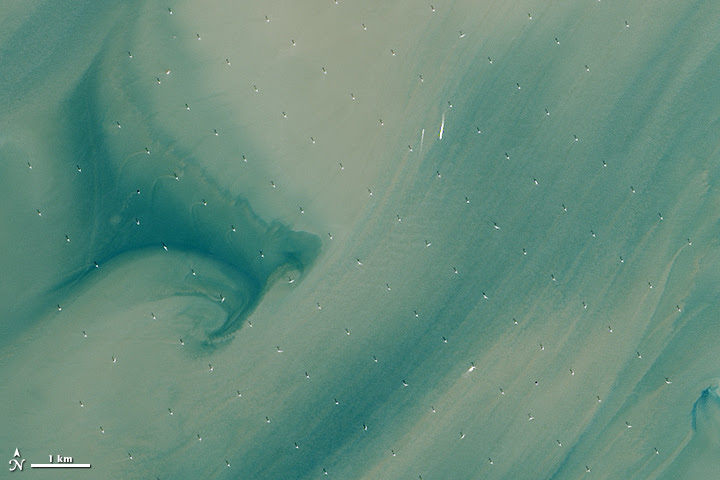 Twenty kilometers (12 miles) from England’s Kent and Essex coasts, the world’s largest offshore wind farm has started harvesting the breezes over the sea.
Located in the Thames Estuary, where the River Thames meets the North Sea, the London Array has a maximum generating power of 630 megawatts (MW), enough to supply as many as 500,000 homes. 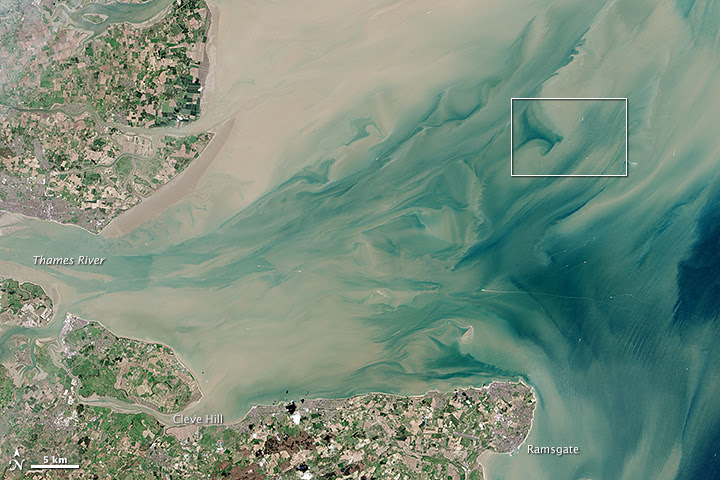 The wind farm became fully operational on April 8, 2013.
Twenty days later, the Operational Land Imager (OLI) on the Landsat 8 satellite captured this image of the area.
The second image is a closeup of the area marked by the white box in the top image.
White points in the second image are the wind turbines; a few boat wakes are also visible.
The sea is discolored by light tan sediment—spring runoff washed out by the Thames.

To date, the London Array includes 175 wind turbines aligned to the prevailing southwest wind and spread out across 100 square kilometers (40 square miles).
Each turbine stands 650 to 1,200 meters apart (2,100 to 3,900 feet) and 147 meters (482 feet) tall.
Each is connected by cables buried in the seafloor, and power is transmitted to two substations offshore and to an onshore station at Cleve Hill.
With construction operations working out of Ramsgate, the Array is eventually supposed to grow to 245 square kilometers (95 square miles).
The wind farm sits on two natural sandbanks, with water as deep as 25 meters (80 feet).
The site was chosen because of its proximity to onshore electric power infrastructure and because it stays out of the main shipping lanes through the area.

Promoters of the London Array project assert that it will reduce annual carbon dioxide emissions by 900,000 tons, equal to the emissions of 300,000 automobiles.
Critics of the project and its second phase are concerned that the wind farm will decimate the population of red-throated divers and other bird species.