'All Is Lost' movie: Robert Redford is our man

A man sails the Indian Ocean alone on his 37-foot yacht, 1700 nautical miles from the Sumatra Straits.
He is awoken one morning by a crash: a metal container off a cargo ship has struck his boat, perforating and flooding it, disabling all communication.
The man fights resourcefully to repair the damage and battle the elements: blistering sun, a violent storm.
After eight debilitating days, with only a half-day’s worth of rations left and virtually no hope for rescue, it seems that all is lost.
J.C. Chandor’s All Is Lost strips the conventional action movie to its essentials.
One confined setting.
Virtually no dialogue.
And a man with only the sailing skills and self-determination to make a go of survival.
His boat is called the Virginia Jean, but he is the man with no name, no knowable past, no loved ones nor enemies back home to give his quest familiar emotional moorings.
In a way, Chandor set himself and his audience the same restrictions as his protagonist.
They would discover who the man is by what he can do.
And by who plays him: Robert Redford. 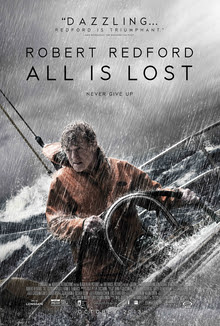 All is lost : never give up

All Is Lost, which had its world premiere at Cannes before opening in U.S. theaters this October, stocks its 105 minutes with enough seafaring challenges and adventure to keep mainstream audiences fascinated, fraught and rooting for the person identified in the closing credits as “Our Man.”
Yet it is also an arguably unique exercise in storytelling: both a work of cinematic innovation and a thrilling demonstration of the ancient maxim that action is character.

Other films about a man alone on the water look positively profligate by comparison.
Spencer Tracy played a Cuban fisherman in the 1958 The Old Man and the Sea, but he was on land with others at the beginning and the end.
In 1963, Japanese director Kon Ichikawa retold the true story of a man who sailed from Osaka to San Francisco in Alone on the Pacific; there, flashbacks provided clues to his reasons for attempting this feat.
Most recently, Ang Lee’s Life of Pi famously put a teenage boy on a raft in the Pacific, after 40 minutes of exposition about his family and the tiger who would accompany him.

All Is Lost dispenses with land, friends, flashbacks and tigers.
Our Man doesn’t talk to himself, let alone to a volleyball.
He has his own company; that must be enough.
And because he is played by Redford, it is more than enough.