Is it love? Why some ocean animals (sort of) mate for life 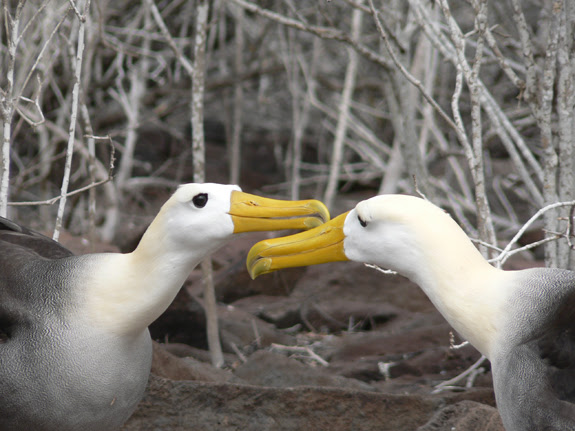 Two waved albatrosses, the only tropical albatross species, courting one another on the Galapagos Islands.
Photo by Flickr User James Preston

We often hear stories of animal love—tales of rare monogamy in the animal kingdom where life-long love is implied. But there is a distinction between romantic love and an efficient mating system. Here’s a look at some ocean animals to see what is really going on.

Albatross relationships seem especially relatable to humans.
These long-lived and highly-endangered birds will court each other through ritual dances for years. Albatrosses are slow to reach sexual maturity, and some species even delay breeding for several years to learn specific mating rituals and to pick the perfect partner.
The courtship behavior slows down once the pair bonds (an all too familiar aspect of human relationships).
Once a pair is comfortable and breeding commences, they will return to each other and the same spot each year; for most albatross species, the bond lasts their entire life.

So is it love?
The biological reality is that albatrosses only lay a single egg a year.
With both parents fully invested in chick survival, their genetic heritage is most likely to survive.
It may seem like love, but with those low reproduction rates no parents can afford to be deadbeats. 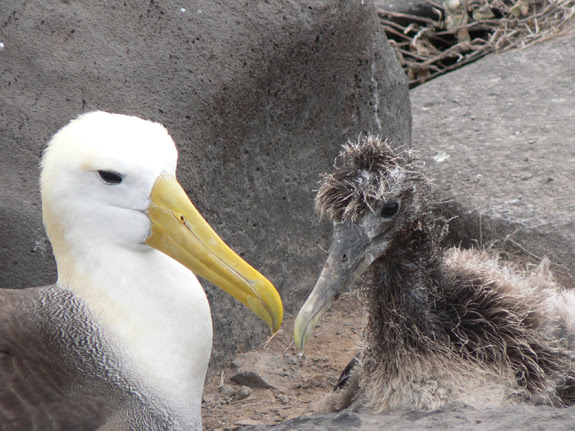 A waved albatross looks after its chick on the Galapagos Islands.
Photo by Flickr user James Preston

Seahorses Bond to Improve the Odds of Birth

If albatross relationships are reminiscent of fairytale romance, seahorses might be considered the swingers of the sea.
Many seahorse species will bond with a mate, but that bond often lasts only through a single breeding season or until a more attractive female comes along.
But, monogamy in this case is useful since it can be hard to find fellow seahorses due to poor swimming skills and low densities.

There is evidence that the longer that partners are together, the more successful at breeding they become and the two are able to produce more offspring per brood.
One species of seahorse does appear to stick with a single mate for life: the Australian Hippocampus whitei.
Practice makes perfect! 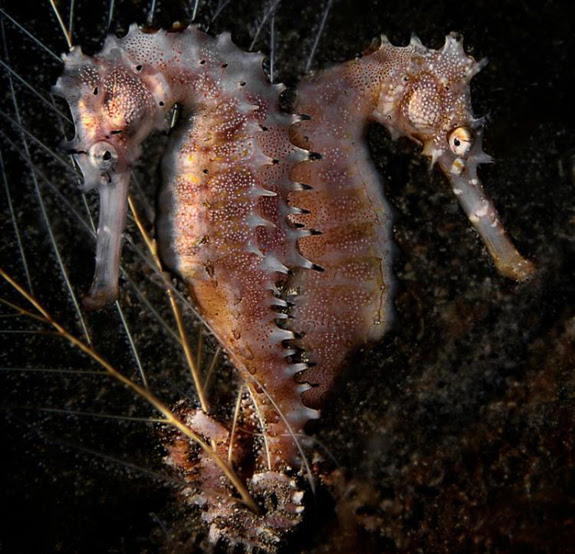 Typically in pairs, French angelfish (Pomacanthus paru) help each other defend their territory against other fish.
The couples have been observed spending extended periods of time together, exhibiting more of a monogamous social structure.
Genetic monogamy (i.e. testing fertilized eggs to confirm they come from a single father) hasn’t been confirmed, but there have been observations of pairs traveling to the water’s surface to release their eggs and sperm together.
Monogamy is not that common in fishes, and it is mostly found in tropical and subtropical waters. Care needed from two parents, joint defense of territories, and difficulties in finding a mate all can play a role. 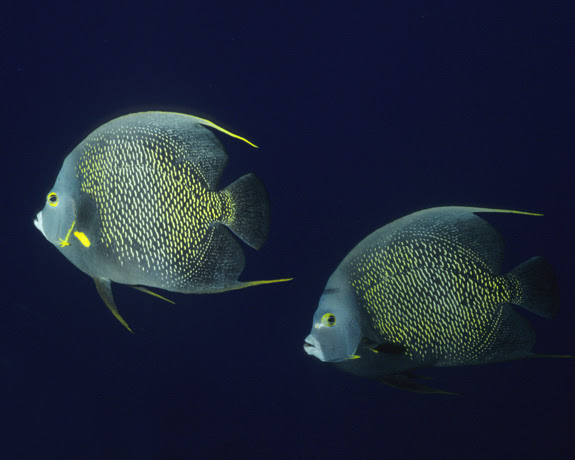 A pair of French angelfish off the coast of Brazil.
Photo by Barry Peters

A Permanent Glass Home for Shrimp

These intriguing glass sponges, called Venus’s flower-baskets (Eupectella aspergillum), are made of flexible silica that can better transmit light than our man-made fiber-optic cables.
And many of these beautiful deep-sea sponges are also home to a monogamous pair of shrimp.

Several species of shrimp find refuge in these sponges, but due to the limited space found within the fine-mesh silica, only two adult shrimp can fit inside—and they are stuck there for life.
The two spend their days cleaning the sponge and eating whatever bits of food manage to flow through.
After they breed, their small offspring can squeeze through the holes in the mesh to escape, but eventually they will settle into a new home with their own imprisoned mate. 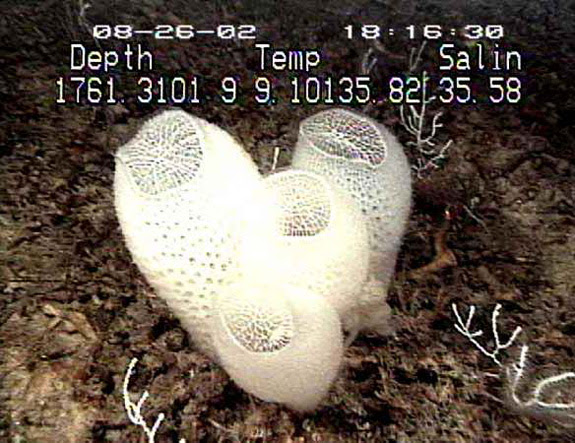 The silica home of a male and female shrimp – the deep-sea sponge Venus’s flower-basket.
Photo via NOAA

The gift of this sponge, taken from the deep with the two dead shrimp still trapped inside, is considered good luck for couples marrying in Japan.
It seems as though young human couples are not the only ones to share tight living spaces.
Posted by Peio at 1:07 AM