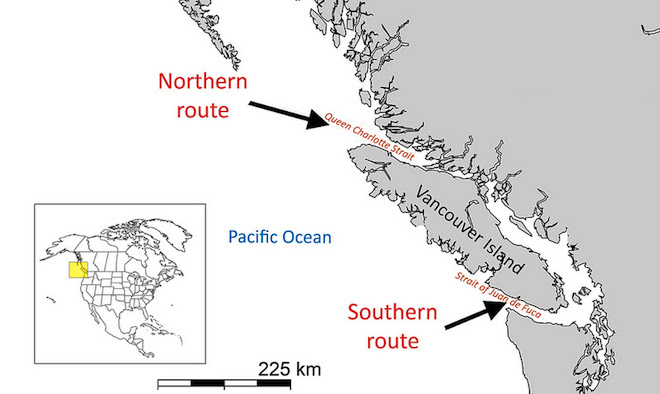 After years at sea, sockeye salmon returning to their freshwater homes may be guided by an early memory of the Earth’s magnetic field, encoded at the site where natal streams empty into the Pacific Ocean, according to a study published today in Current Biology.

“Lots of folks have been wondering for decades how salmon and other animals, like sea turtles or seals and whales, go out in the ocean for a couple of years and then return with remarkable accuracy back to their home,” said study coauthor Nathan Putman, a marine biologist at Oregon State University.
“The magnetic field is an important part of the [salmon's] migratory decision." 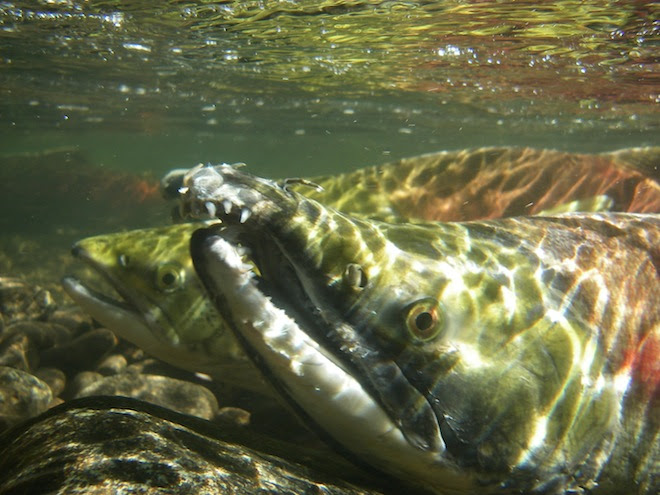 To study salmon navigation, Putman and his colleagues took advantage of a serendipitous natural experiment.
Near the mouth of British Columbia’s Fraser River is 460-kilometer-long Vancouver Island. Salmon returning from sea and aiming for the river face a choice: swim north around the island, or go around to the south.
Putman pored over 56 years of data from federal fishery scientists who tracked salmon in both waterways, then matched that up with measurements of the Earth’s geomagnetic field, which shifts predictably in strength and orientation over time.
He found that fish tended to choose the path where the field strength was more similar to that of the river mouth when they’d left, two years before.


“The magnetic field at each route predicts the proportion coming in,” Putman said.
He speculates that reaching saltwater triggers the fish to remember the magnetic field at the river’s mouth when they first head to sea — and then seek that same field on the return journey.

Scientists hope the finding will help solve the mystery of how salmon find their way home from thousands of miles away, across an ocean with no lanes or landmarks. It’s already accepted that in the final stages of the journey to their breeding grounds, salmon use odors to guide them back to the stream or inlet where they hatched.
But how the fish find their target river is still a mystery, although scientists have suspected for a while that magnetic cues play a role.
Last summer, a team reported that rotating magnetite crystals in a fish nose responded to magnetic field orientation, providing a possible biological mechanism for this sensory capability. 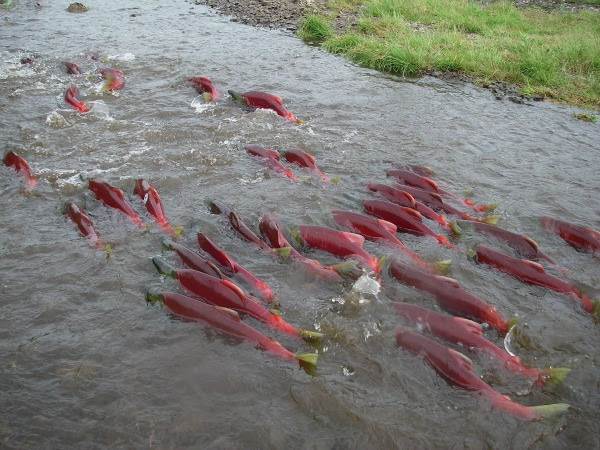 “In general, we know much less about how salmon complete the ocean part of their migration compared to fresh water,” said quantitative ecologist Chloe Bracis, a graduate student at the University of Washington who also studies geomagnetic salmon navigation.
“The authors cleverly take advantage of spatial differences in a salmon migration route to provide the first solid evidence that salmon use geomagnetic cues to direct their oceanic migration.”

But even if those experiments bolster the case that salmon use geomagnetic cues, these cues can’t be the whole story.
The new study also revealed that sea surface temperature is an important guide for the fish — but even the interaction of water temperature and magnetic cues can’t explain all of the fishes’ knack for navigation.
Temperature, olfaction and magnetoreception, while clearly important, may be just some of the tools salmon use to find their way home.
“They might use … a sun compass or other cues,” Bracis said.
“Geomagnetic cues could guide them to the vicinity of the river, then they would need to switch to other local cues to navigate the rest of the way to the river mouth or through the estuary.”