Researchers at Durham University have drawn up new maps to show the competing claims of Argentina and the UK for resources in the South Atlantic and Southern Oceans.

The publication of the maps follows the discovery of oil south of the Falkland Islands by a British company, Rockhopper Exploration, and a series of historical arguments about sovereignty and the rights to resources in the South Atlantic.

Argentina and Britain went to war over sovereignty of the Falklands (also known as Islas Malvinas in Spanish) in 1982, and despite the former's surrender, the South American state has maintained its territorial claims to the islands.

In December 2009, Argentina passed a law declaring its sovereignty of the islands and other British overseas territories in the region.

The Durham map was compiled using data from a variety of sources, including the submissions of the two states to the United Nations Commission on the Limits of the Continental Shelf. Specialist mapping software (Caris LOTS) was used to construct the jurisdictional limits depicted on the map.

The decision by Durham University to comprehensively map the claims in the area highlights the complicated issues that remain following the British defeat of the Argentineans almost 30 years ago. The information is the first ever comparative map of resource claims in the region.

The Durham map shows:
Director of Research at Durham University's International Boundaries Research Unit (IBRU), Martin Pratt said: "The map is designed to show the extent of the competing claims between the UK and Argentina and highlights the complications that exist in determining the claims for resources in the South Atlantic and Southern Oceans. 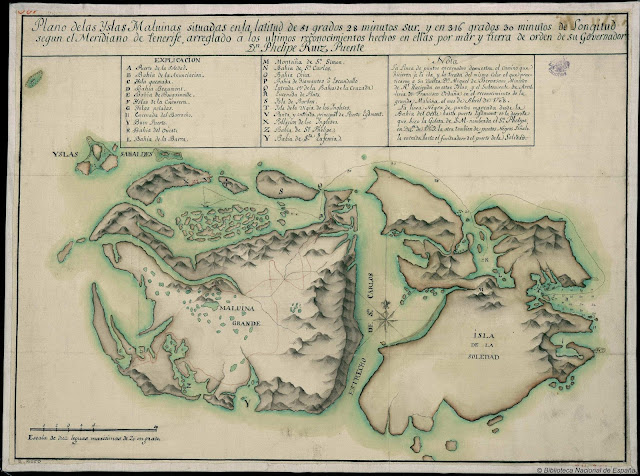 An early Spanish map of the Falkland Islands (1769)

"The islands generate rights over the resources of more than 2.5 million square kilometres of sea and seabed in the South Atlantic Ocean alone, and both countries have recently defined the areas over which they claim sovereign rights. IBRU's maps highlight the nature of those claims and identify the areas in which the claims overlap.

With the search for oil in this area continuing to intensify, the potential for conflict over the sovereignty of the waters between Argentina and the UK remains high.
Some oil companies estimate a potential 3.5 billion barrels of oil and nine trillion cubic feet of natural gas exist under the South Atlantic waiting to be extracted. A study by the British Geological Society suggested that up to 60 billion barrels of oil could lie beneath the seas to the north of the Falklands -- a similar-sized deposit to that in the North Sea.
Martin Pratt said: "The discovery of oil in the North Falkland Basin is likely to exacerbate tensions between the UK and Argentina concerning sovereignty over the Falkland Islands, South Georgia and the South Sandwich Islands.

"Although sovereignty over the islands remains the key issue, determining maritime jurisdiction around the islands -- and off disputed territory in Antarctica -- will be a complex and challenging task."

In February 2010, British warships were on standby in response to rising tensions in the area over British firms exploring for oil. Argentina demanded a halt to the drilling which it deemed was illegal and imposed a permit restriction on ships approaching the islands.
Links :