The way the world catches fish defies all economic logic

From Quartz by Gwynn Guilford

It’s often said that there are plenty more fish in the sea.
For most of human history, that was true.
From ancient Minoans to postwar industrial trawl fleets, mankind found wealth from harvesting more and more of the sea’s seemingly endless abundance of creatures.
The more fishermen tried, the more their catches grew, such that, between 1950 and the mid-1990s, global fish landings more than quintupled.

And then, suddenly, that stopped.
Since then, the world has hauled up roughly the same volume of fish out of the ocean each year—about 85 million tonnes, on average.
It’s not hard to guess the culprit: overfishing.
Similarly well-known is that overfishing is a problem of biology: we’re hauling up too many fish, leaving too few adult ones behind to repopulate. 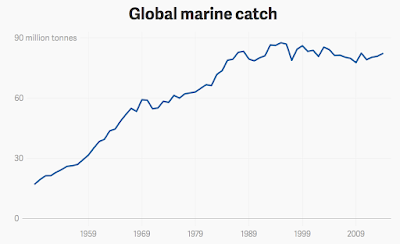 But if fewer and fewer fish are left behind to replace themselves, why have we caught around the same volume of them each year for the last two decades?
The answer, explored in an important new World Bank study, reveals a little-understood dimension of why overfishing is so destructive.
It’s not just biologically unsustainable; our global marine fisheries are also uneconomic.
That’s because we’re pouring more and more effort into fishing, and still getting the same result.

Nowadays, more people are using more boats, more fuel, and more technology to catch sea creatures than ever before in human history.
The global fleet doubled in the last four decades, according to UN FAO data, and the ranks of fishermen has more than tripled.
At the same time, heavy technology investment—in things like more powerful engines, fancier fishing gear and spiffy fish-location devices—likely boosted fishing efficiency of fishing capital and labor, according to 2017 World Bank report, The Sunken Billions Revisited.

Taken together, global fishing effort has surged at least fourfold in the last 40 years, while the level of catches has not even doubled, says Charlotte de Fontaubert, senior fisheries specialist at the World Bank.
“If we have to fish four times as much in order to catch twice as much fish, the only way to explain that differential between the increase in catching and [the catch levels] is that stocks have declined,” says de Fontaubert, who co-authored The Sunken Billions Revisited.

This is a problem of productivity, the measure of how much value a person creates per hour.
When productivity grows, it means we’re making more with less.
Global marine fisheries are doing something approaching the opposite: making the same with more.
But how has such an unproductive industry been chugging along for so long?

In its fuller picture of the global marine balance sheet, the new World Bank report tallies up not just assets of fisheries, but also costs and subsidies.
The global fishing industry landed $164 billion worth of marine fish in 2014.
However, taking into account labor, capital, and fuel costs and subsidies, global fisheries produced a net loss of $44 billion, according to the World Bank.

By encouraging more fishing than is economical, government subsidies crash the supply of fish all the more, says Glenn-Marie Lange, economist at the World Bank and one of the report’s authors.
“There are too many vessels out there that are not only financially unprofitable but fishing way beyond what can be regenerated by the natural population,” says Lange.

Of course, that’s not true for every country.
Out of 139 countries evaluated, 64 generated profits from their fisheries, even after accounting for subsidies.
But the fisheries of 75 countries aren’t actually generating wealth.

There’s a word for these fisheries: zombies, unprofitable enterprises kept on life support by government subsidies.
One problem with zombies is that they waste resources that could be directed toward productive uses—for example, retraining fishermen to work in other industries.
Another problem is that, freed from suffering the punishing effects of economic logic, they can keep prices low.
That can drive sustainably operating fishermen out of business.

For seafood lovers—at least, the ones who don’t eat exclusively sustainably caught fish—there is a perverse upside to the zombie status quo.
Sushi sure is cheap when it’s bought and paid for by taxpayers.