Eighty to 90 percent of the heat from global warming is going into Earth's oceans.

The world is getting warmer every year, thanks to climate change — but where exactly most of that heat is going may be a surprise.

As a stunning early spring blooms across the United States, just weeks after scientists declared 2016 the hottest year on record, it’s easy to forget that all the extra warmth in the air accounts for only a fraction of the heat produced by greenhouse gas emissions.
In fact, more than 90 percent of it gets stored in the ocean.
And now, scientists think they’ve calculated just how much the ocean has warmed in the past few decades. 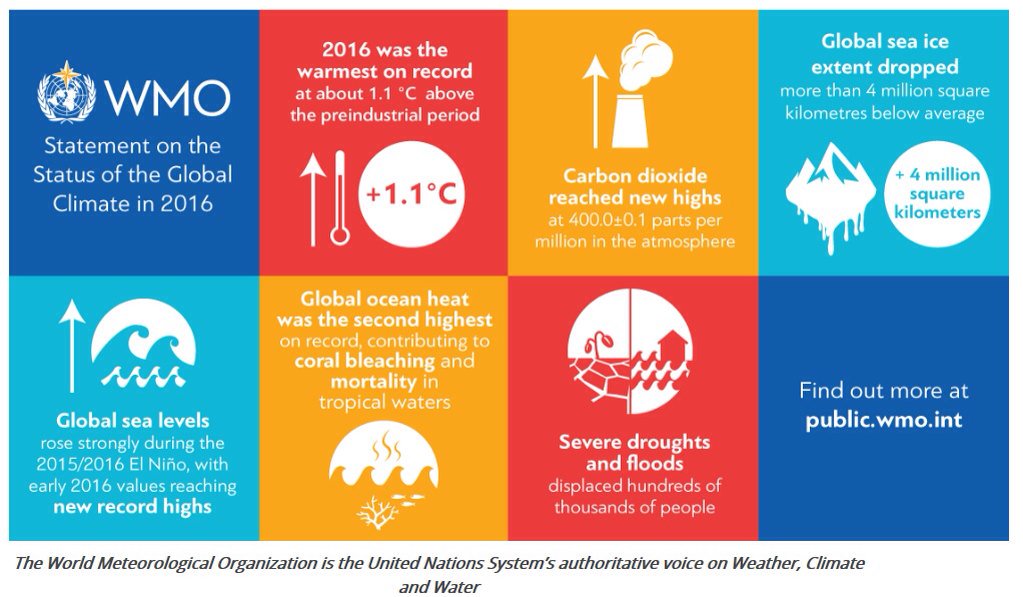 A new study, out Friday in the journal Science Advances, suggests that since 1960, a staggering 337 zetajoules of energy — that’s 337 followed by 21 zeros — has been added to the ocean in the form of heat.
And most of it has occurred since 1980.
“The ocean is the memory of all of the past climate change,” said study co-author Kevin Trenberth, a senior scientist at the National Center for Atmospheric Research.
The new value is a number that significantly exceeds previous estimates, Trenberth noted.
Compared with ocean warming estimates produced by the Intergovernmental Panel on Climate Change, the new values are about 13 percent greater.
This is the result of a new methodology for estimating ocean warming, involving a series of steps “that really make this paper different than previous ones,” Trenberth told The Washington Post.

In previous decades, there have been a lot of challenges associated with monitoring temperature changes in the ocean.
Before the year 2000 or so, most monitoring instruments had to be deployed from ships.
This mean that scientists only had the most reliable data for parts of the world that lie along major shipping routes.
In the past 15 years, though, scientists have developed the “Argo” network, a system of free-drifting devices that are designed to periodically adjust their buoyancy, so they can sink several thousand meters into the sea, collect measurements, and then rise back up to the surface.
There are now about 3,500 of these devices deployed throughout the world’s oceans, leading to a much better dispersal of observations.

Argo is the largest ocean research project in the world and aims to report the climatic status of the world oceans in real-time every 10 days and report the data for use by anyone, anywhere on the planet.
The global array is now in place and is reporting as planned.
Accomplishing this required the cooperation of 24 nations deploying ocean-going robots in support of the global array.
Today the Argo array is gathering more data each year from the Southern Ocean than has been acquired by the sum of all previous research in that ocean.
The data are being used for seasonal climate forecasting, ocean exploration, fisheries management and innumerable other purposes.
It can be accessed in real time by anyone who has a connection to the internet.

The new study, which was led by Lijing Cheng of the Chinese Academy of Sciences and included other scientists from that institution, from the National Center for Atmospheric Research, and from the National Oceanic and Atmospheric Administration, employs a new methodology for using both the recent Argo measurements and past observations from ships to produce a continuous series of estimates from 1960 to 2015.
The scientists incorporated an updated database of pre-Argo measurements that have been corrected for certain biases, as well as information from climate models, and extended existing observations of ocean conditions taken at specific locations to larger areas of the sea.
They then conducted a comparison of recent Argo data with measurements created using their new methodology and found that the method produces true-to-life results.


Earth scientist Alex Gardner reveals a world of rapid change as seen through the eyes of a NASA glaciologist.
Glaciers and ice sheets hold massive amounts of freshwater locked up as ice.
These stores of freshwater feed water supplies that support millions of people around the world, raise global sea levels, and can even change the rate of Earth’s rotation.
It is now nearly certain that as Earth’s atmosphere and oceans warm over the coming centuries, glaciers and ice sheets will continue to retreat and sea levels will continue to rise.
The big question now is at what rate and by how much?

The results suggest that the ocean has been sucking up more heat than previous research has indicated.
In fact, according to Trenberth, the new estimates help explain observations of global sea-level rise that scientists have had difficulty accounting for until now.
A certain percentage of sea-level rise can be attributed to the expansion of ocean water, caused by rising water temperatures, while the rest comes from melting glaciers.
Scientists have good estimates of how much melting ice is going into the ocean, but they’ve come up a bit short in the past in trying to reconcile the rest of the planet’s observed sea-level rise with their estimates of how much the ocean has warmed in recent decades.
“This actually fills in the gap,” Trenberth said.
The study also suggests that the extra heat is not being stored evenly throughout the oceans.
The Atlantic and Southern oceans, in particular, are the biggest new heat reservoirs, the results indicate, storing about 59 percent of the heat despite accounting for less than half of all the ocean area in the world.


How can we better prepare for tropic storms or drought?
Jochem Marotzke investigates the oscillations of the atlantic currents, responsible for these extreme climatic conditions.
He can precisely predict them within a few years.

The researchers think the reason has to do with a major ocean current system known as “overturning circulation.”
This system is kind of like a giant ocean conveyor belt that runs warm water from the equator toward the poles, where it cools, sinks to the bottom of the oceans and flows back in the other direction.
The system helps transport both heat around the world, and the overturning process is pronounced in both the Atlantic and Southern ocean waters.
While the paper’s staggering new results reaffirm the importance of the ocean as a climate change buffer — without it, much of that heat would remain in the atmosphere or the earth’s land masses — it’s certainly not without consequences.
Rising ocean temperatures are believed to be a major cause of the mass coral bleaching that’s occurred all over the world over the past several years, in conjunction with an unusually strong El Niño beginning in 2015.

It’s still unclear how other organisms might be affected, but many marine animals thrive best within specific temperature ranges.
Many marine biologists believe that continued warming, along with other climate-related changes such as ocean acidification, may force certain species to migrate to cooler or deeper areas in the future.
Trenberth added that increasing heat moving into the surface of the ocean could also lead to “dead spots” in the ocean — places where layers of warm water get stuck on top of layers of cooler water.
When this stratification happens, it can become more difficult for the waters to mix and churn as they normally would, a process that helps stir up nutrients and oxygen that are vital to marine organisms.

All this is to say that climate change affects far more than just our air temperature — and the new study documents its clear progression in places thousands of meters below the surface of the sea.
The results also come at a sensitive point for ocean and climate research, just a week after The Washington Post revealed a proposal from the Trump administration that calls for significant budget cuts for the National Oceanic and Atmospheric Administration, including a 26 percent cut for its Office of Oceanic and Atmospheric Research.
It’s the primary research arm of NOAA, Trenberth pointed out, and such drastic cuts to the program could mean even basic observations programs like Argo may no longer continue.
“As a result, the information will not even be there,” Trenberth said “That would be tragic.”