Scientists have discovered evidence of a massive ancient undersea landslide next to Australia's Great Barrier Reef.

The Queensland Basin is a north-south trending extensional basin located off the north Queensland coast between Cape York and Townsville.
It lies largely beneath the bathymetric feature known as the Queensland Trough, seaward of the Great Barrier Reef. 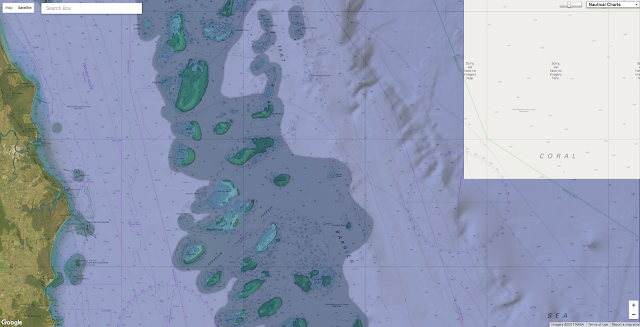 The Queensland Basin is about 1100 km long, and 50 to 150 km wide.
The basin is poorly defined in some areas due to lack of data, particularly in its southern part, between the Queensland coast and the Marion Plateau.
(AHS nautical chart with the GeoGarage platform)

The Gloria Knolls Slide is at least 300,000 years old and 32 cubic km in volume, or 30 times the size of Uluru.
The landslide could also have triggered a large tsunami, said the international team behind the find.
The scientists said debris from the landslide, found as deep as 1,350m (4,430ft) below the sea, also provided clues about hidden marine life.
The team made the discovery while conducting three-dimensional mapping of ancient reefs in the Queensland Trough, a vast basin adjoining the Great Barrier Reef.

Fly-through of the largest-ever undersea landslide found along the entire margin/slope bordering the Great Barrier Reef, in far north Queensland.
The scientists – including from the University of Sydney, James Cook University and the University of Granada – went on to model a potential tsunami for a sudden under-sea mass failure on this scale, yielding a wave elevation of about 27m.
It is believed that the impact of any resultant wave would be softened significantly by the presence of the relatively modern, 9000-year-old formation we call the Great Barrier Reef, but this remains to be assessed systematically.
More seabed mapping and sampling is also needed to locate, characterize and determine the timing at which the landslides occurred.

Dr Robin Beaman, from Australia's James Cook University, said the researchers located a cluster of hills, or knolls, more than 1,100m beneath the surface.
"What we discovered was the smoking gun," he told the BBC.
"It was quite clear that those knolls were the remains of a very large undersea landslide that had occurred some time ago."
That time was at least 300,000 years ago, he said, because coral fossils collected from the knolls went back that far, and the landslide would have predated them.
He described it as "catastrophic collapse" because the knolls - as long as 3.6km (2.2 miles) - were found 30km from their original location.
Other evidence of the landslide would have been buried over time, he said.

The knolls are more than 1,100m beneath the surface
(James Cook University)
Was there a tsunami?

The research, published in the journal Marine Geology, said the landslide had the potential to cause a large tsunami.
Although modelling had put its elevation as high as 27m, the impact of a tsunami would have been significantly offset by the presence of coral reefs.
"The Great Barrier Reef acts like a giant porous breakwater to reduce the energy [of ocean swell]," said Dr Beaman.
"If it was in existence at the time of this landslide, it would have done a similar job."
He said future risk to the Queensland coast appeared unlikely because it was a "a very old event", but it was a worthy topic for future research.

The researchers found deep marine life including cold-water corals, molluscs and barnacles were thriving on the knolls.
The corals, unlike their shallow reef counterparts, could survive in 4C temperatures with no sunlight, Dr Beaman said.
He said possibilities for future research were exciting.
"That really is the next frontier," he said.
"We probably have a bit of an idea of what's living up to 200m or 300m [deep], but beyond that, very few people have done much work in this area."
The research was a collaboration between James Cook University, University of Sydney, University of Granada, University of Edinburg