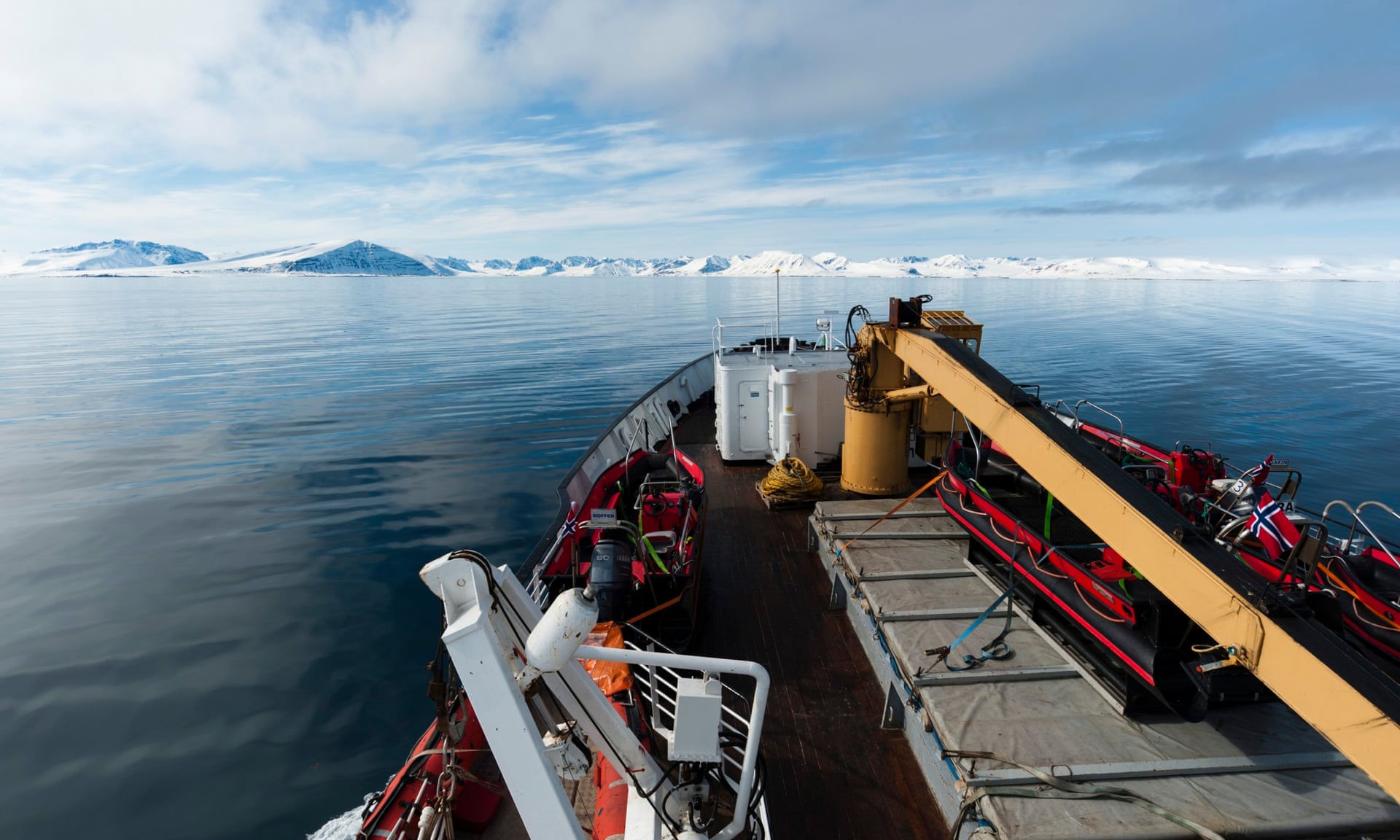 Russia, Europe and the shipping industry have been waiting
for a major ice-free shipping lane to open through the Arctic.
Photograph: Sergio Pitamitz/Robert Harding World Imagery/Corbis

Ordinary merchant ships will not be able to take an ice-free shortcut from China to Europe until at least 2040, report predicts

It will be decades before big cargo ships link China and northern Europe by taking a shortcut through the Arctic Ocean, a report predicts.
Climate change, retreating summer ice and the prospect of shorter journey times and 40% lower fuel costs has led Russia, European governments and some industries to expect a major ice-free shipping lane to open above Russia, allowing regular, year-long trade between the Atlantic and Pacific oceans within a few years.

But, says the Arctic Institute in a new paper, low bunker fuel prices, a short sailing season and continuing treacherous ice conditions in the Arctic even in summer months means it could be 2040 at the earliest before it is commercially viable for ordinary merchant ships to pass through what is known as the northern sea route.
Until then it will remain cheaper to send trade between Europe and the east via the Suez canal, it says. 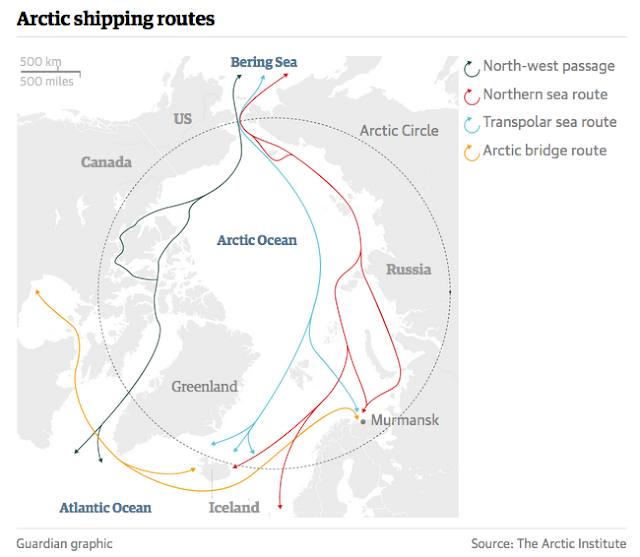 The conclusions of the report were backed this month by the powerful Danish Shipowners’ Association, which includes 40 major shipping companies such as Maersk, the world’s largest. Denmark has the eighth largest fleet in the world and would stand to gain the most in Europe if the northern sea route opened.
“We have gone from hyper-optimism to total realism. The world economy was developed on the basis of a high oil price. The northern sea route seemed viable [a few years ago] but now it’s not the case. The route has vast potential but it will take a long time to open up,” said Anne H. Steffensen, director of the association at a meeting of Arctic country ministers and industry in Tromsø.

Russia has tried to open up the Arctic to international traffic by offering icebreaker service and better port facilities.
But cargo in transit along the northern sea route dropped from 1.3m tonnes in 2013 to 300,000 tonnes in 2014.
Last year only 100,000 tonnes was transported between Asia and Europe on the route.
However, there was a big rise in the number of vessels going to and from Russian Arctic ports.

The Arctic Institute report, which compares the costs of building ice-reinforced ships suitable for the northern sea route, to existing costs of using the Suez canal, includes fuel prices, wait times, lengths of journey, canal fees and different sea conditions.
It concludes that trade is unlikely to open up the northern route for decades.

It expects the Arctic sea ice to be too thick and treacherous for many years, requiring expensive ice breakers and strengthened hulls.
“The Arctic navigation season is currently too short and ice conditions are too unpredictable for liner shipping to be feasible. Arctic liner shipping will only become a viable alternative to the contemporary shipping lanes if global warming continues to melt the ice cover along the North-west passage and the Northern sea route.
“It is highly unlikely that large-scale containerised cargo transports will appear in the near future. The question then arises: when, if ever, will the ice conditions allow for continuous and economically feasible container transport along the route?”

The greatest potential for the use of ice-reinforced container ships was found if the speed of global warming increased and the price of fuel is high.
But even in this scenario, the cost per container was about 10% higher than going via the Suez canal route.
Scientists have predicted that ordinary vessels would be able travel easily along the northern sea route, and moderately ice-strengthened ships should be able to pass over the pole itself by 2050.
Russian authorities still sees a bright future for shipping along its northern shoreline, but not as a busy international shipping route.
“It is 100% sure that the northern sea route will be no alternative to the Suez Canal,” Russia’s deputy minister of transport, Viktor Olersky, told the Arctic Circle 2015 assembly.

Holland America Line, cruise liner for penguins (but in Antarctica)

Unusually high temperatures in January led to January seeing the lowest recorded extent of sea ice in the satellite record.
The ice extent averaged 13.53 million square kilometres (5.2 million square miles), which is 1.04 million sq km (402,000 sq m) below the 1981 to 2010 average, according to the US government’s National Snow and Ice Data Centre.