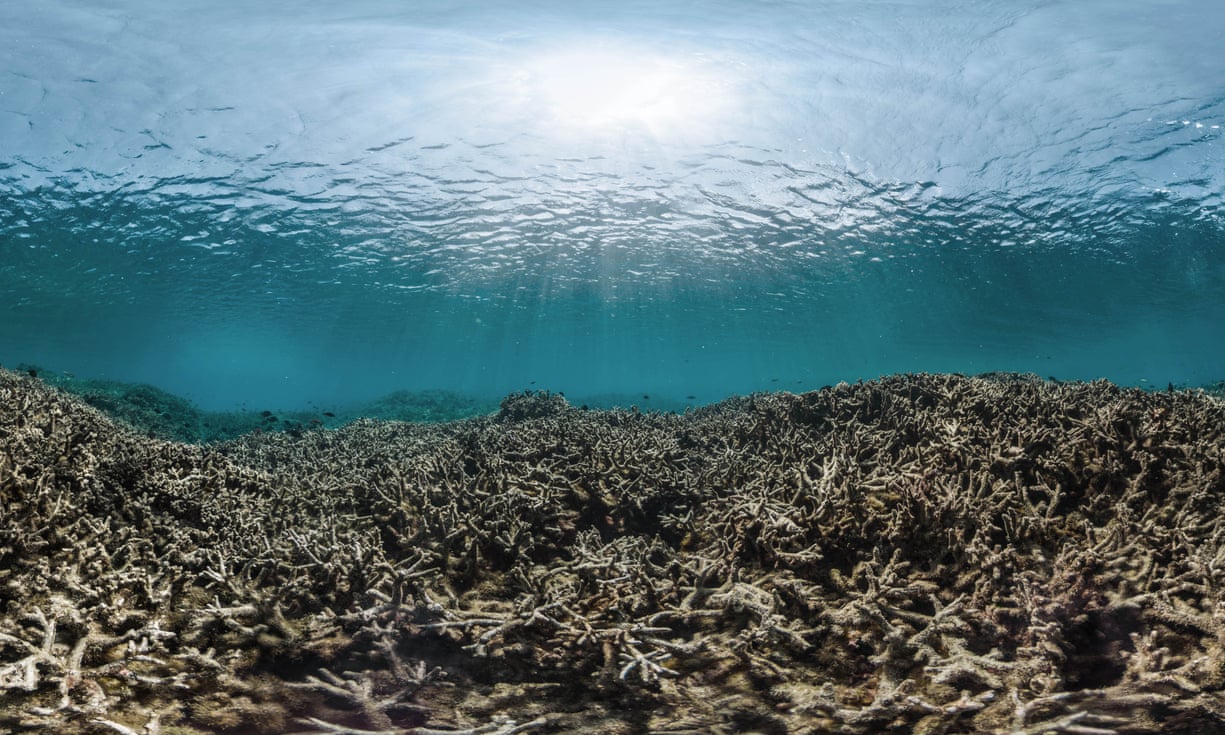 By the end of this year 38% of the world’s reefs will have been affected.
About 5% will have died.
Photograph: XL Catlin Seaview Survey/Macrae/PA

Important ecosystems could be massively damaged by 2050 unless greenhouse gas emissions and localized pollution is drastically reduced, researchers say

The food chains of the world’s oceans are at risk of collapse due to the release of greenhouse gases, overfishing and localized pollution, a stark new analysis shows.

A study of 632 published experiments of the world’s oceans, from tropical to arctic waters, spanning coral reefs and the open seas, found that climate change is whittling away the diversity and abundance of marine species.


Thousands of sharks visit a sea mount - Blue Planet: A Natural History of the Oceans
In the Pacific, a tiny island 300 miles away from the shore hides a giant mountain beneath the waves that forms a home for thousands of planton feeding fish.
These fish attract tuna, and the tuna attract thousands of sharks.
Watch this video to learn more about this fascinating food chain,
and hear some weird but true facts about the visiting Hamerhead sharks

The paper, published in the Proceedings of the National Academy of Sciences, found there was “limited scope” for animals to deal with warming waters and acidification, with very few species escaping the negative impact of increasing carbon dioxide dissolution in the oceans.

The world’s oceans absorb about a third of all the carbon dioxide emitted by the burning of fossil fuels.
The ocean has warmed by about 1C since pre-industrial times, and the water increased to be 30% more acidic.

The acidification of the ocean, where the pH of water drops as it absorbs carbon dioxide, will make it hard for creatures such as coral, oysters and mussels to form the shells and structures that sustain them.
Meanwhile, warming waters are changing the behaviour and habitat range of fish.

The overarching analysis of these changes, led by the University of Adelaide, found that the amount of plankton will increase with warming water but this abundance of food will not translate to improved results higher up the food chain.
“There is more food for small herbivores, such as fish, sea snails and shrimps, but because the warming has driven up metabolism rates the growth rate of these animals is decreasing,” said associate professor Ivan Nagelkerken of Adelaide University. “
As there is less prey available, that means fewer opportunities for carnivores.
There’s a cascading effect up the food chain.
“Overall, we found there’s a decrease in species diversity and abundance irrespective of what ecosystem we are looking at. These are broad scale impacts, made worse when you combine the effect of warming with acidification.
“We are seeing an increase in hypoxia, which decreases the oxygen content in water, and also added stressors such as overfishing and direct pollution. These added pressures are taking away the opportunity for species to adapt to climate change.”


As record ocean temperatures cause widespread coral bleaching across Hawaii, NOAA scientists confirm the same stressful conditions are expanding to the Caribbean and may last into the new year, prompting the declaration of the third global coral bleaching event ever on record.
Waters are warming in the Caribbean, threatening coral in Puerto Rico and the U.S. Virgin Islands, NOAA scientists said.
Coral bleaching began in the Florida Keys and South Florida in August, but now scientists expect bleaching conditions there to diminish.
This bleaching event, which began in the north Pacific in summer 2014 and expanded to the south Pacific and Indian oceans in 2015, is hitting U.S. coral reefs disproportionately hard.
NOAA estimates that by the end of 2015, almost 95 percent of U.S. coral reefs will have been exposed to ocean conditions that can cause corals to bleach.
The biggest risk right now is to the Hawaiian Islands, where bleaching is intensifying and is expected to continue for at least another month.
Areas at risk in the Caribbean in coming weeks include Haiti, the Dominican Republic and Puerto Rico, and from the U.S. Virgin Islands south into the Leeward and Windward islands.
The next concern is the further impact of the strong El Niño, which climate models indicates will cause bleaching in the Indian and southeastern Pacific Oceans after the new year.
This may cause bleaching to spread globally again in 2016.

The research adds to recent warnings over the state of the oceans, with the world experiencing the third global bleaching of coral reefs.
Since 2014, a massive underwater heatwave, driven by climate change, has caused corals to lose their brilliance and die in every ocean.
By the end of this year 38% of the world’s reefs will have been affected.
About 5% will have died.


Coral reefs are suffering a severe underwater heatwave this year - resulting in the third global bleaching event seen in oceans around the world.

Coral reefs make up just 0.1% of the ocean’s floor but nurture 25% of the world’s marine species. There are concerns that ecosystems such as Australia’s Great Barrier Reef, which has lost half its coral cover over the past 30 years, could be massively diminished by 2050 unless greenhouse gas emissions are slashed and localized pollution is curbed.

Meanwhile, warming of the oceans is causing water to thermally expand, fueling sea level rises caused by melting land ice.
Research released in the US on Monday found that Antarctic ice is melting so fast that the whole continent could be at risk by 2100, with severe consequences for coastal communities.

Problems in the ocean’s food chains will be a direct concern for hundreds of millions of people who rely upon seafood for sustenance, medicines and income.
The loss of coral reefs could also worsen coastal erosion due to their role in protecting shorelines from storms and cyclones.

“These effects are happening now and will only be exacerbated in the next 50 to 100 years,” Nagelkerken said.
“We are already seeing strange things such as the invasion of tropical species into temperate waters off south-eastern Australia. But if we reduce additional stressors such as overfishing and pollution, we can give species a better chance to adapt to climate change.”