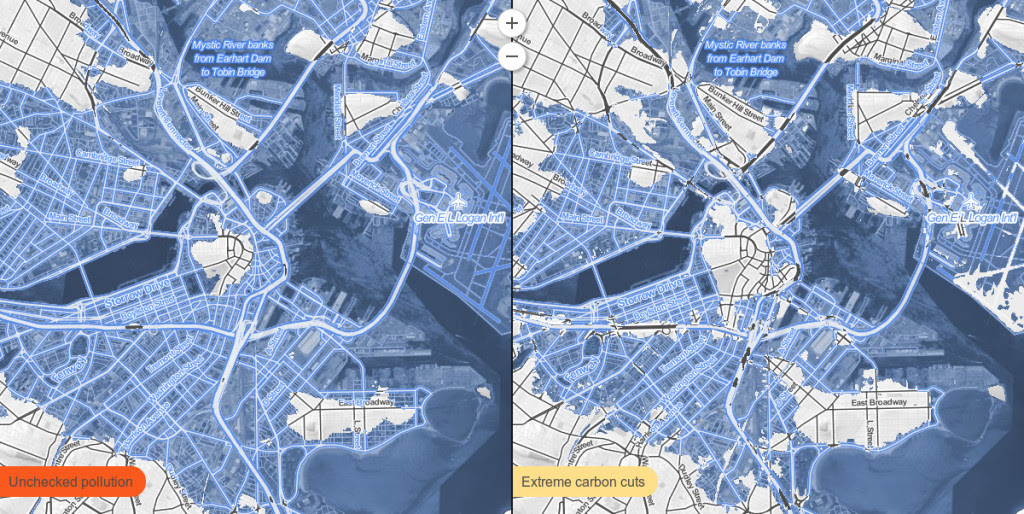 New interactive map shows how rising seas will swallow US cities
Where the streets have no name.

There’s a good chance that the most often-heard global warming joke in the US is some version of the following: [Point to an empty lot somewhere far from the ocean] “In 100 years, this is going to be beach front property!”
Not funny, but kind of true.

Rising tides are already lapping away at shorelines from Bellingham to Biscayne Bay.
And with atmospheric carbon dioxide levels steadily rising, many of the country’s coastal cities and towns will someday be under water.

That’s even if the December Paris climate talks lead to significant global emissions cuts.
A new map from Climate Central shows how the water will flow into hundreds of US cities under the best and worst global warming scenarios.
It uses data from an accompanying study, published today in the Proceedings of the National Academy of Sciences, that links CO2 to sea level rise to the topographic contours of the coastal US.

A lot of this inundation is already on the books.
Called locked in rise, it comes from energy banked in atmospheric CO2.
Carbon molecules will eventually release that energy as heat, which will raise the global mean temperature.
Seasons will cycle, years will pass, and weather patterns will fluctuate.
And after some time—could be decades, could be centuries—the atmosphere will settle its thermodynamic debt, and a bunch of ice will melt.

It’s not just the volume of added ice that makes the oceans rise.
The Antarctic and Greenland ice sheets are so massive that they exert gravitational pull on the ocean.
“So sea level is higher right next to those places because of that pull,” Ben Strauss, co-author author of the study, and climate scientist at Climate Central
(Disclosure: I was a Climate Central data visualization intern for a few months in 2013).
Warmer water is also less dense.
Higher and higher those waters will climb.

But how far depends on how much carbon humans continue to emit.
“For a long time I’ve wanted to be able to show a map that very clearly contrasts the future under high carbon emissions or low carbon emissions,” says Strauss.


Developed in partnership with COMET Program/MetEd, "Geospatial Infrastructure for Coastal Communities" is aimed at community planners, emergency managers, and other coastal zone decision-makers.
This video will explain how using geospatial information already available through NOAA, combined with strategic local investments in infrastructure can provide communities with the data needed to confidently plan for future sea-level changes.

Not an easy task.
The research began by linking a historical data set showing how temperature affects peak sea level rise with another data set showing the relationship between carbon emissions and temperature.
After millions of computer experiments, they had some usable ratios of between carbon emissions to sea level rise.
“One of the most astonishing things to me was finding that burning one gallon of gasoline translates to adding 400 gallons of water volume to the ocean in the long run,” he says.

Coastal topography maps accurate down to a few inches showed where the water would rise.
“Local, state, and federal agencies have been flying lidar missions over coastal areas for 15 years now,” says Strauss.
Finally they added the 2010 census, and used the historic high tide lines to measure which pixels (each representing about 15 feet per side on the ground) would be drowned in the inundated future.

Or at least, some version of the future.
They projected their data using four future emissions scenarios, ranging from extreme carbon cuts to emissions-heavy business as usual.


Here’s the result (You can pan around to other cities):

For example, when the global atmospheric CO2 level reaches 930 gigatons, Boston will be due for about 9 feet of sea level rise.
That’s enough water to cover 25 percent of the city during high tide.
In the extreme cuts scenario, atmospheric CO2 never reaches that level.
Under business as usual fossil emissions however, a quarter of Boston is locked into a future under water by 2045.

Existential nihilists however, can relax: Nobody’s doomed yet.
Future Americans are going to deal with the flooded basements and foregone civilization.
“Those generations could know lower Manhattan as a place to visit, or as a place to go diving for ruins,” says Strauss.

The study, in other words, isn’t about how much see level rise happens this century, but whether this century’s emissions bank enough carbon for total ice melt down—or some less drastic version.
“Our analysis really looks at a 2000 year envelope,” says Strauss.

Why the long horizon?
“It turns out it’s a lot easier to project how much the sea level will rise than how quickly the sea level will rise,” says Strauss.
Blame geology for the uncertainty.
“We do not know much about the bedrock on which the ice lies,” says Anders Levermann, study co-author and climate scientist at the Potsdam Institute for Climate Impact Research in Germany.
Under the ice, Greenland and Antarctica are uncharted territories.
In order to calculate the rate at which those massive ice sheets slough off, Levermann says he would need to know more about the texture of the underlying rock.

Linking CO2 to sea level rise isn’t exactly novel, but it’s not often you get to look at how the emissions decisions our species make today will affect the seaside legacy left for future generations. If you’ll pardon the pun, this map really brings climate change home.