Vyacheslav Korotki walks out under a full moon to an abandoned lighthouse that used to serve the Northern Sea Route, to gather firewood to help heat his home.

Photographer Evgenia Arbugaeva got a glimpse into the loneliest man in the world.

This man is Vyacheslav Korotki, a « polyarnik », in other words, a meteorologist specialized in the north pole, that the Russian government sent to the end of the world, in Khodovarikha, in order to gather the temperature, snow and wind data.

Korotki lives and works in the Arctic outpost of Khodovarikha, in a century-old wooden house that became a meteorological station in 1933.
He enters all the data he collects in a journal.

The 63 year old scientist is cut from the rest of the world, and only rarely visits his wife that lives on the other side of the country; either way, he prefers the Arctic and grand spaces.

Meteorological journals, an atlas of clouds, and other books and data tables scattered across Korotki’s desk.
The photograph of Yuri Gagarin was cut out from a newspaper article about his death, in 1968.

This fantastic series called « Weather Man » is available now on her site !

Vyacheslav Korotki is a man of extreme solitude.
He is a trained polyarnik, a specialist in the polar north, a meteorologist.
In the past thirty years, he has lived on Russian ships and, more recently, in Khodovarikha, an Arctic outpost, where he was sent by the state to measure the temperatures, the snowfall, the winds.
The outpost lies on a fingernail of a peninsula that juts into the Barents Sea.
The closest town, by any definition, is an hour away by helicopter.

The radio that Korotki uses to relay his data to another weather station, which then sends it on to Moscow.
Owing to some of the same conditions that he measures—frequent high winds and heavy snowstorms—transmissions can be delayed for days.

He has a wife, but she lives far away, in Arkhangelsk.
They have no children.
On his rare visits to Arkhangelsk, he has trouble negotiating the traffic and the noise.
Arkhangelsk is not Hong Kong. 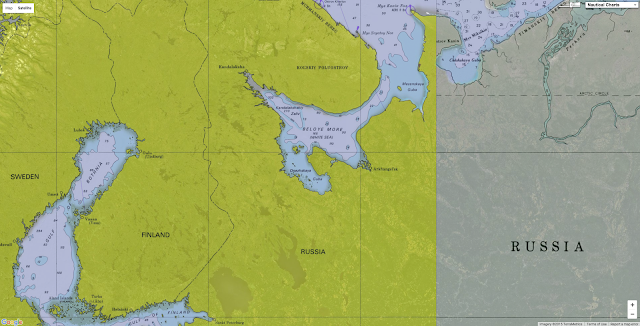 Arkhangelsk with the GeoGarage platform

Korotki is sixty-three, and when he began his career he was an enthusiast, a romantic about the open spaces and the conditions of the Arctic.
He watches the news on TV but doesn’t fully believe it.
Polyarniki were like cosmonauts, explorers for the Soviet state.
There are fewer now.
Who wants to live like this anymore?

Korotki enjoys a cigarette in his handmade boat on the Barents Sea.

Evgenia Arbugaeva, a photographer who grew up in the Arctic town of Tiksi, spent two extended stays with Korotki.

A view of the northern lights, at Khodovarikha, on January 25th of this year.
The measurement booth, a five-minute walk from the house where Korotki lives and works, records the air temperature.
That day, it was minus four degrees Fahrenheit.

“The world of cities is foreign to him—he doesn’t accept it,” she says.

Korotki observes the landscape from the window of his house the day after a strong storm blanketed the terrain with snow.

“I came with the idea of a lonely hermit who ran away from the world because of some heavy drama, but it wasn’t true. He doesn’t get lonely at all. He kind of disappears into tundra, into the snowstorms. He doesn’t have a sense of self the way most people do. It’s as if he were the wind, or the weather itself.”

A view of the Barents Sea from a window of the Mikhail Somov, a ship that delivers food and supplies to Korotki’s station once a year, during the summer navigation season.
On the months-long voyage, crew members are entitled to a treat of an orange a week.