Mediterranean Sea as afflicted by plastic dumping as the big oceans 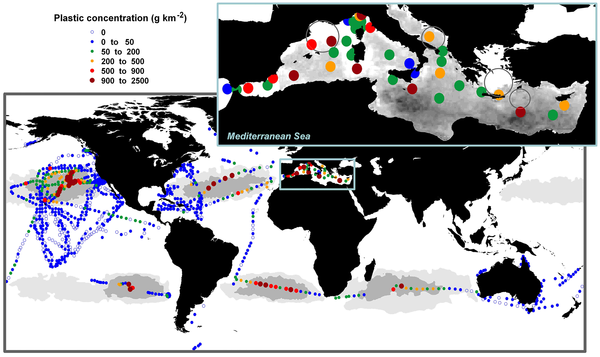 Concentrations of plastic debris in surface waters of the Mediterranean Sea at basin scale, and compared to the plastic concentrations reported for the global ocean.

From Haaretz by Ruth Schuster

It's hard to know how much plastic is reaching the seas, let alone what's happening to it.
New study estimates Med load alone is one item per four square meters of water.

The Mediterranean Sea is just as badly afflicted by plastic dumping as the rest of the world's oceans, despite being relatively isolated, scientists say.
The team, from the universities of Cadiz and Barcelona in Spain and the King Abdullah University of Science and Technology in Saudi Arabia, found that an average plastic density of one item per four square meters of water in the Mediterranean Sea.

Some 250 billion plastic particles weighing a total of 500 tonnes litter the Mediterranean, threatening sea life which can suffocate when eating them

Just as horrifyingly, they found plastic debris in every single one of the sites they sampled, the team reported in PLOS ONE this week.
That's about the same as the accumulation level found in the five subtropical ocean gyres – circulating ocean currents.

Bathymetry of the Mediterranean Sea (IBCM)

How much plastic is actually there in the Mediterranean Sea?
The team's best estimate is 1,000 to 3,000 tons and counting.
One would think it possible to reach a narrower range of estimates, but one would be wrong. Nobody knows how much plastic is entering the ocean from waste generated on land or by ships.
A study published in February 2015 (the first of its kind for 40 years) tried to put together worldwide data, adjusting for population density and economic status: it estimated that in 2010, the 192 coastal nations of the world produced 275 million metric tons of plastic waste.
Of that, anywhere from 5 million tons to 13 million tons wound up in the water.
To put that into proportion, in 2012 scientists estimated that all humanity together weighed 316 million tons.
In other words, according to that estimate, humans are putting around 2% of their total weight worth of plastic into the sea each year.
Moreover, the same 2012 study, which was done by a team of American scientists and published in Science, forecasts that by the year 2025, people will have dumped 155 million tons of plastic into the oceans – half of mankind's total weight. 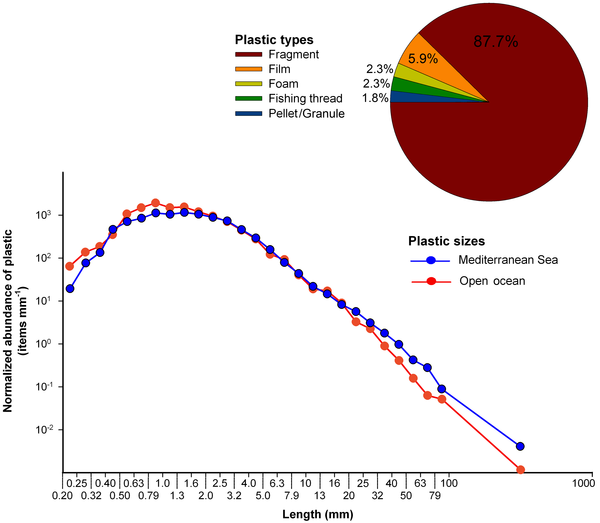 Size distribution and aspect of the floating plastic debris collected in the Mediterranean Sea.

And it will stay there

Plastic famously fails to biodegrade.
Nobody actually wants to eat it, though plenty of sea animals do so by mistake, often fatally: it cannot be digested and even if it doesn't choke them, their digestive systems get impacted.
But over time, plastic does break down into tiny pieces, eventually down to the level called "micro-plastics" which can be accidentally – fatally - eaten by the microscopic animals on which the entire global food chain depends.
Anyway, what plastic does not do is vanish.
The team estimates that the total amount discarded and floating in the Mediterranean Sea is between 1,000 and 3,000 tons.
Surface samples found that the dominant plastic debris in the Mediterranean Sea was millimeter-sized fragments.
If the Mediterranean Sea was distinguished from the great oceanic gyres – the circulating currents - in one way, it was a higher prevalence of large plastic objects.
That, postulate the scientists, is because by the time the plastic detritus reaches the "plastic islands" – such as the famous "Great Pacific Garbage Patch" - in the oceans, it has traveled a long way and disintegrated into tiny pieces.
In the small Mediterranean Sea, the distance from the sources of the pollution to the detritus is small. 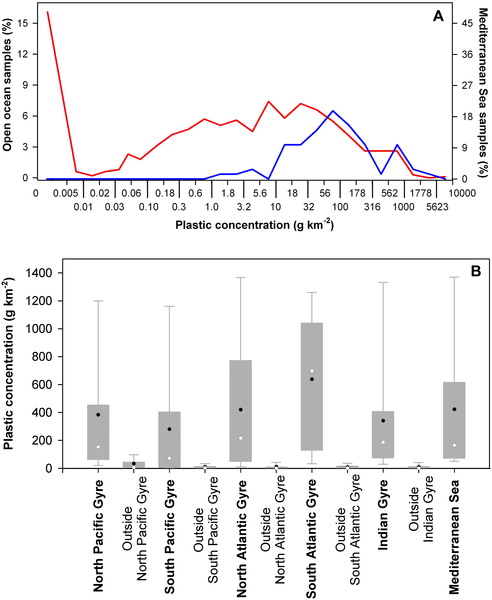 Ranges of surface plastic concentrations measured in the Mediterranean Sea,
and reported for the open ocean.

Whodunit? And where is it?

Perhaps the most worrying thing of all, for the oceans and the Mediterranean Sea too, is that the great garbage islands turn out to be a drop in the sea, so to speak.
Total global plastic production is at least 300 million tons a year.
If in 1975, a National Academy of Sciences study estimated that about 0.1% of global plastic went out to sea each year – now the thinking is that the real proportion is 15% to 40%.
Scientists have long demonstrated the existence of five so-called "plastic islands" in the oceans, which accumulate plastic that arrives on the ocean currents.
Each contains millions of pieces of plastic per square kilometer.
Though make no mistake, the plastic is everywhere in the water.
Scientists had assumed that most of the plastic tossed into the sea wound up in these mounting piles on the water surface, created by powerful oceanic currents.
But if that were the case, the garbage patches should be much, much bigger than they are.
Ergo, most of the plastic is not ending up in the great plastic islands.

So where is it?
Scientists now admit they have no idea where 99% of ocean plastic ends up, though clearly some micro-plastic is ending up on the sea floor.
Sadly for them, marine animals are eating at least some of the missing plastic, mistaking the small bits for food.
It isn't though.
It isn't nutritious for just about anybody – with one possible exception.
If there's hope, it's that some of the missing plastic is actually being eaten by microbes.
If there's one thing that characterizes life on this planet in general , it's adaptability.
Otherwise there would be no life.
Maybe there's some germ down there in the depths, or on the surface, that's evolved a taste for plastic. We just haven't found it yet.
Posted by geogarage at 1:25 AM