From Scientific American by Brittany Patterson


In December, residents in Marin, a county in the northern part of the San Francisco Bay Area nestled across from the Golden Gate Bridge, woke up to find that some of their roadways, docks and parking lots were underwater.
Unlike in past years, when the king tides—unusually high tides that occur when the sun and moon are closer to the Earth—were accompanied by stormy weather, residents this year were faced with just some minor flooding.

But more and more, parts of California are seeing an increase in such flooding, said Gary Griggs, director of the Institute of Marine Sciences at the University of California, Santa Cruz.
Griggs is among the scientists who sat on a legislative committee to examine how rising sea levels will affect the California economy.
He said in the last four years California has shifted from thinking about rising sea levels as a "black box" toward putting money where the science is.
"A number of communities realize they're losing land," he said, adding that in some ways "nuisance" flooding might be to thank for continuing to keep the rising sea levels conversation open.
"Those events are raising the visibility and making it more immediate," he said. "In some ways, it's a good thing."
In just a few decades, most U.S. coastal regions are likely to experience at least 30 days of nuisance flooding every year.
Washington, D.C.; Annapolis, Md.; and Wilmington, N.C., are already in trouble.
By 2020, seven more cities, including Baltimore and Atlantic City, N.J., can add themselves to the list.
And within the next 35 years, most cities along all coasts will be dealing with routine flooding. 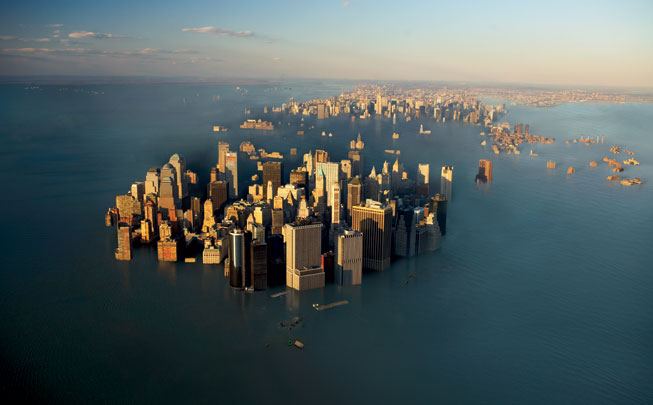 An ominous message from the 'future'

The term "nuisance flooding," which is not as glib as it sounds, basically means municipalities can expect to see more water in the streets and low-lying areas and can expect not only inconvenience but modest damage thanks to rising sea levels spurred by climate change.
This is one message from a study released in December in the journal Earth's Future by two oceanographers at the National Oceanic and Atmospheric Administration who took tidal data from cities with a continuous 50-year measurement and added local sea-level rise projections to show what the future would look like.

William Sweet, one of the authors, said the idea behind developing the "tipping point" measurement was to bring some immediacy to the impacts of sea-level rise.
"Much of the discussion around sea-level rise is around main sea-level rise, 2 feet by 2100, for example," he said.
"That problem is understood to be in the future, but we wanted to use projections to show when the impacts of sea-level rise become frequent enough that they will actually spur action."
Some cities, such as New York, are bolstering their shorelines in response to extreme events, such as Superstorm Sandy.
But with more than half the U.S. population living within 50 miles of the coast, many areas are just at the beginning stages of preparing to deal with rising sea levels and the increased flooding they bring.

"Climate change is particularly tricky," said Alexander Aylett, a professor at the National Institute of Scientific Research in Montreal and author of a Massachusetts Institute of Technology report, "Urban Climate Change Governance Survey," that examined to what extent cities around the world are trying to tackle climate change.
"Governments are used to dealing with problems that are somebody else's business," he said.
"The people who build your roads don't regulate what happens on top of them or how we build next to them, but climate change is everywhere, all the time, all at once."

Annapolis, Maryland, pictured here in 2012, is one of three major East Coast urban areas already being faced with nuisance flooding in excess of 30 days per year.
(Credit: Amy McGovern)

Sweet and co-author and fellow NOAA oceanographer Joseph Park's data showed the nation's capital was one of the locations already experiencing 30 or more days of flooding a year.
More than that, in just 15 years, Washington is expected to see flooding more than 6 feet above the local high tide line—a level topped just once in the last 70 years.
To put that in perspective, $4.6 billion in property value, and 1,400 people in 400 homes, sit on this area, according to a report released in September by the nonprofit Climate Central, which used NOAA and other data sets for these projections.

D.C. has multiple plans at various stages, but the process to address climate change began in earnest in 2008 when localities adopted the "Washington Capitol Regional Climate Change Report," which set short-, medium- and long-term goals, such as reducing greenhouse gas emissions and making buildings more energy efficient.
For example, a short-term goal of reducing regional greenhouse gas emissions by 10 percent under business-as-usual terms by 2012 is still being evaluated, but the first few areas measured seem to have met their targets, said Stephen Walz, director of the Department of Environmental Programs for the Metropolitan Washington Council of Governments.

Implementing adaptation measures, especially to address sea-level rise, is ongoing.
Reports of future flooding at the National Mall have prompted the relocation of certain collections to higher ground, and parts of the Metro system have been rebuilt with higher curbs to circumvent flooding, Walz said.
As for nuisance flooding, Walz said more water on the streets has prompted an acknowledgement that changing conditions need to be accounted for when plans for a region are being made.
"When you size a culvert now, you're going to have to size it bigger to carry more water," he said, as an example. "So engineers and architects are going to have to make changes to that."

A few cities awaken in Md.

For Kate Skaggs, nuisance flooding has been anything but, at least when it comes to pushing for more action on sea-level rise in Maryland.
"It's helped us to communicate sea-level rise in a much more concrete way, instead of just an abstract idea of sea-level rise," she said.
Skaggs works with the CoastSmart Communities grant program, a NOAA-funded initiative that provides grants to local governments in Maryland's coastal zone to better prepare for rising sea levels and other coastal hazards.
Seventy percent of Maryland's residents live in the 16 counties within the coastal zone.
Climate change has been on the agenda in Maryland for more than 15 years, prompted by concerns over land erosion.

In 1998, Zoe Johnson, program manager for climate change policy at the Maryland Department of Natural Resources, drafted a sea-level rise strategy.
It was adopted two years later, and the state has been working to implement it since.
Both Skaggs and Johnson agree that, over the years, collaboration between agencies has increased and state-level policies have solidified Maryland's approach to climate change.
"We've transitioned from building plans to implementing actual projects," Skaggs said.
Flooding has catalyzed some action in certain communities such as Annapolis, Johnson said.
"We had funded two years of looking into the vulnerability of sea-level rise there, but it wasn't until there was more and more chronic flooding and number of days that they had to close streets during a boat show in downtown where then the city had to deal with the question of 'How do we deal with this?'" she said.
Many places have implemented government policies such as requiring increased amounts of freeboard, or the distance between where water would fall and where the building begins, but Johnson notes bigger projects are going to call for a much larger capital investment.

One field of thought is to mitigate the ongoing effects of changing climate by reducing greenhouse gas emissions and building more energy-efficient buildings.
The second way we can deal with the effects of climate change is to adapt.
Build higher walls, move to higher ground.
Klaus Jacob, a Columbia University research scientist who has been a consultant for the New York Metropolitan Transit Authority, argues that a lack of political willpower stems from not only the slow rise of sea levels, but the sheer amount of money it will take to meet the challenge.
His estimate is well over a trillion dollars this century.
"If we don't do anything, it's multiple trillions of dollars," he added.

Part of the challenge is that the United States is far behind the rest of the world.
Globally, Aylett's survey of 350 cities found that 73 percent are considering climate change mitigation and adaptation, while 58 percent of American cities said the same.
Forty-one percent of American cities said they were only thinking about mitigation, almost double the global average.
Aylett said the reasons the United States lags are threefold.
First, his survey found that the majority of cities, although they are dealing with climate change, had not yet figured out how to make it a part of their economy.
Second, North American cities report they are the most understaffed when it comes to climate change planning, often reporting they have staffs of one person.
Third, the United States hasn't transitioned from using all the data that have been collected about the vulnerabilities facing cities into taking action.
With mitigation, a city tallies emissions, sets a level to decrease them by and gets to work. Aylett said it's only very recently that we've gotten to the same place for adaptation.
"We now have a lot of potential to do a lot," he said.
"Potential only goes so far."

A planning budget is born in Calif.

Rising sea levels first came to the attention of Democratic California Assemblyman Rich Gordon before he joined state government.
Gordon's constituents when he was a San Mateo county supervisor found themselves with the Pacific Ocean on one side and the San Francisco Bay on the other.
When he arrived four years ago to the Legislature, he realized his concern about rising sea levels wasn't on anyone else's radar.

Gordon put together a select committee on sea-level rise and the economy, which researched and held hearings on what local communities throughout California were doing.
"We found there were planning efforts going on across the state," he said. "Not everywhere and oftentimes not in a well-coordinated matter, but people were thinking about it."
In September, Gov. Jerry Brown (D) signed into a law a bill that creates an online database where private and public entities in California can share sea-level rise plans.
And most surprisingly, what began as a request for a mere budget line to get sea-level rise on the books grew into a 2014-15 state budget allocation of $2.5 million.
Gordon said that money is just planning dollars at this point and not sufficient to do much in terms of adaptation or mitigation, but he hopes it will give the state a better idea of the financial burden preparing for sea-level rise will be.
As for the king tides and other more frequent flooding, Gordon said it's a wake-up call.
"There are certain places where we're going to need to invest sooner rather than later," he said.
"Our state agencies are communicating with each other, but we need to get local communities involved."