The millionaires who rescue people at sea

Each year, thousands of migrants try to cross the Mediterranean to reach Europe from north Africa - but many of them do not survive the journey.
Almost 2,000 migrants have died in these waters since the start of the year, 1,600 of them since the beginning of June, according to the UN Refugee Agency UNHCR.
Now a philanthropist couple from Malta have launched what they say is the world's first privately funded boat to help migrants in trouble at sea.

From BBC by Mario Cacciottolo


A philanthropist couple have launched what they say is the world's first privately funded vessel to help migrants in trouble at sea.
But can one ship really help the thousands of people who try to cross the Mediterranean each year?

"Our primary aim is to prevent loss of life at sea, not to ferry migrants from one point to another… we will follow the laws of the sea which oblige all vessels to help in case of distress,"
say MOAS founders

Last summer, Regina Catrambone and her husband Chris were on board a yacht cruising around the Mediterranean - but the idyllic holiday scene was interrupted when they spotted something in the sea.
"My husband and I were on the deck and we saw a winter jacket floating in the water, like a ghost," says Regina.
They asked the captain how it ended up there.
"His face became very dark and he said probably the person who was wearing it is not with us any more. That started to trigger our attention."
They realised it had probably belonged to one of the thousands of migrants who try to cross the Mediterranean to reach Europe - 1,889 have died in these waters since the start of the year, 1,600 of them since the beginning of June, according to the UN Refugee Agency UNHCR.
The defining moment for the couple came soon after, when they saw Pope Francis on television, calling on entrepreneurs to help those in need.
"We looked at each other, me and my husband, and we said: 'Let's do something.'
From this moment came the idea of buying a boat and doing something in the Mediterranean, where people are dying every day." 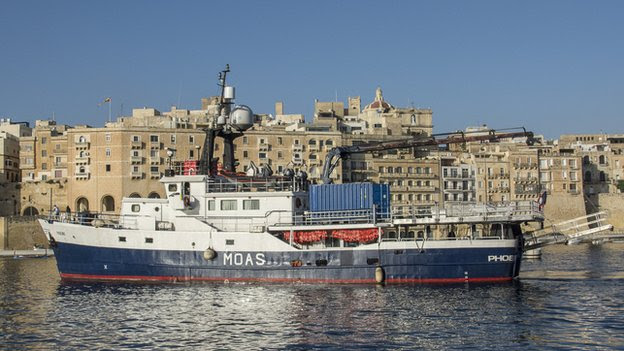 483 gross tonnage / 39.9m by 9.4m / Built 1973
Flies under flag of Belize
Originally a fishing trawler, later used as a research vessel, then by US government for training
Customised flight deck replaces tow bar, which can be reinstalled
16 crew members for MOAS missions, including observers

By October, when the Catrambones heard how more than 360 migrants had drowned near the Italian island of Lampedusa, they were determined to turn their plans into action.
Since then the couple, who are in their 30s, have drawn deeply from their own pockets to fund a highly-sophisticated ship, the Phoenix, based in Malta, where they live.
It has dinghies and two state-of-the art drones which they are using to find and help migrants trying to enter Europe by boat, mostly from Africa.


"The Mediterranean is one of the busiest seaways in the world, as well as a dangerous sea frontier for migrants and asylum seekers en route to southern Europe. In view of the perils UNHCR again calls on all vessels at sea to be on alert for migrants and refugees in need of rescue. We also renew our call to all shipmasters in the Mediterranean to remain vigilant and to carry out their duty of rescuing vessels in distress."
- UNHCR

They have named their operation Migrant Offshore Aid Station (MOAS).
But while some ships begin life on the sea with a bottle of champagne smashed against their hull, the Phoenix began its time as an aid station for migrant ships by having holy water sprinkled inside it.
During a Catholic mass, held in the ship's lounge the day before the Phoenix embarked on its first patrol on Monday, a priest told the assembled crew that they are on a mission from God.
He gave each of them a small bottle of holy water from Lourdes and gave the ship a golden crucifix to carry out on the Mediterranean.
The service was "very important for my husband and me, and for the crew to have spiritual support before they leave, because they will be weeks at sea so they will need God's help," says Regina, who is Italian. 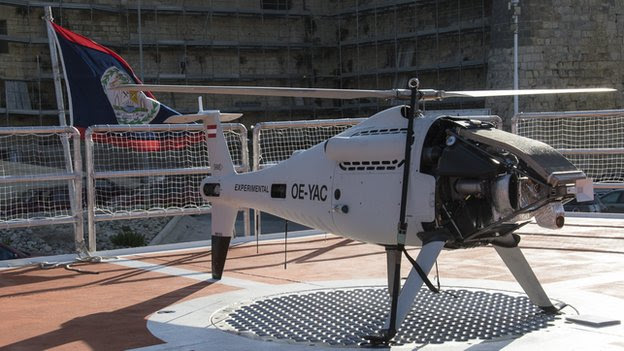 Campcopter S-100
The camcopter, weighting 200kg, can do six hours at a stretch and can cover 200km per hour, operated within a maximum range of 100km.
The camcopter, equipped with infrared cameras, can also send clear images during the night with a camera so sharp it can actually read what’s written on the palm of a hand.

Her husband Chris, who is from New Orleans in the US, proudly shows off the custom-made flight deck, home to two Schiebel S-100 camcopters, or drones, which MOAS has leased.
He explains how their HD-quality, night vision and thermal imaging cameras are powerful enough to read a piece of paper in a passenger's hand from the air.
"We are making history in many ways by being the first civilian ship to use such grand technology. We hope that this is going to change the environment for rescue at sea. We're innovators here. We're trying to do something that no-one else has been able to do. We've put our money where our mouth is," he says. 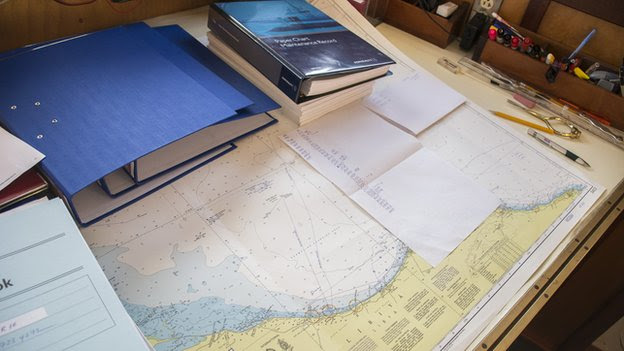 When the ship comes across a migrant boat in international waters, the crew will contact the nearest authorities.
"We will communicate the position of the boat in distress to the authority and we will wait for what they tell us to do," says Regina.
While they wait for instructions, they will use the dinghies to approach the boats, pass over food, water and lifejackets and offer medical assistance - the Phoenix has a paramedic on board and also has a well-equipped medical bay.
"However, in case the boat is taking water, or the number of the people [on board] is higher than should be, we will communicate that to the authorities and we will do what needs to be done. If we need to take people on board we can, until Malta or Italy come to take them, and disembark them on land."


Regina and Chris will take it in turns to go to sea on the Phoenix.
It may seem naive to think such an operation can be carried out by civilians but the director of the project was, until recently, the commander of the Armed Forces of Malta and members of the crew have experience in the armed forces, maritime rescue and medicine.
The entire project, the couple say, has cost them "millions" with the total running costs of the ship's initial 60-day mission being 2m euros, (£1.59m, $2.64m) which they say is the extent of their budget.
The Catrambones have a group of companies registered in Malta, providing insurance and services to people operating in conflict zones.
They are hoping to crowd source extra funding for MOAS, aside from their own cash, and extend it into an all-year-round operation.

According to the UNHCR, about 19,000 migrants have arrived in Malta from Libya since 2002.
Last year it was estimated that about 30% are still on the island, which has a local population of some 417,000.

Once they are ashore tensions frequently arise, with less than charitable comments about migrants often appearing on Maltese media websites.
No-one from the Maltese government responded to interview requests about MOAS - migration has been a thorny issue for the local authorities, with Prime Minister Joseph Muscat saying his country is struggling to cope with the influx.
But he was forced last year to cancel two flights repatriating migrants back to Libya by the European Court of Human Rights.

Maltese columnist Pamela Hansen says the MOAS operation will provoke mixed reactions in Malta, with some being pleased that lives are to be saved, but others being concerned more migrants will arrive as a result.
"Obviously the authorities are going to be very cautious. They are worried because we do have a problem, just as Italy has a problem. The whole of Europe is anxious about this.
"But because we perhaps are the first stage sometimes of where the migrants land, there's a bit more apprehension.
"I don't know what the government's feeling about MOAS, but what I can tell you is there's a lot of public opinion that is anti-illegal immigration, so maybe the authorities are being rather cautious before they comment." 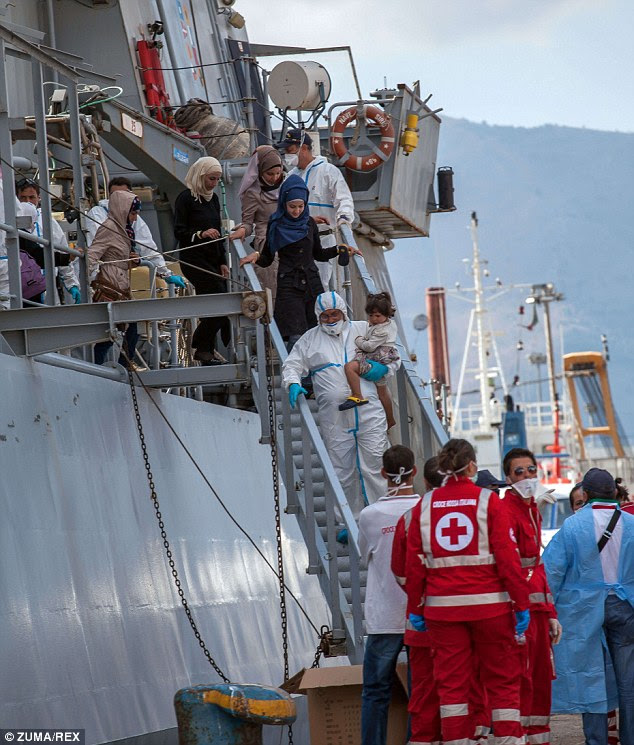 The Italian Navy brought to shore over 200 Syrian migrants, 49 women and 73 children, after a delicate rescue operation on the Strait of Sicily

While Regina is diplomatic about MOAS's "ongoing" dialogue with the local authorities, she does reveal the Phoenix is flying under the flag of Belize because the process of getting a Maltese registration was "taking too long".
But she bristles at suggestions that the couple's cash should be deployed another way, perhaps to help migrants once they disembark.
"There are NGOs doing that on land, but not at sea," she says.
She mentions Mare Nostrum, the Italian navy and coastguard's search-and-rescue operation, launched after the October Lampedusa drownings.
Doubt had been cast upon its long-term future, and now the EU and Italy have just announced the formation of Frontex Plus, an extension of its current border management scheme, to take over from Mare Nostrum in November.
One migrant who did make it to Malta is 24-year-old Ibrahim Ahmed Adam, who arrived from Somalia via Libya in May 2012.
"My boat broke down on the sea, and if I had not been rescued it would have been the last journey of my life.
"So I can understand deeply the meaning the MOAS operation has for people at sea. It's a very good step."